On this page of our guide to Borderlands 3 you will find a detailed description of The Family Jewel main story mission. This task consists in examining a part of the ship in order to find a key fragment to the Vault. Once you arrive at the scene, you'll have to deal with the boss, a big mech controlled by the GenIVIV. 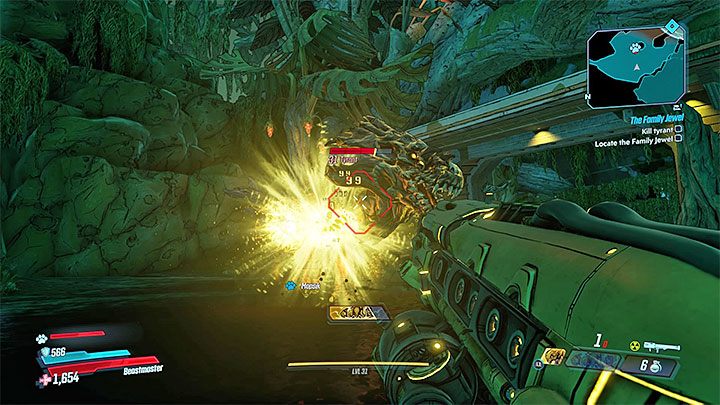 Return to Knotty Peak to meet Hammerlock and collect Monty's Wooden Record from him. Place it in the gramophone in the hunting lodge to listen to the recording. You must set off on a journey to the new location called the Voracious Canopy. The passage to it is under one of the big trees.

Full exploration of the new map is not required, but of course you can unlock side quests of Rumble in the Jungle or pick up collectibles. On your way to your destination, you will run into Tyrant, the Borderland in-game variety of T-Rex. Try to attack the monster from a distance, using launchers, sniper rifles or assault rifles. Also, you can retreat to a higher shelf where a large dinosaur will not be able to get you. This will allow you to safely attack it. The defeated Tyrant will leave behind a Ugly Pink Plushie teddy bear. 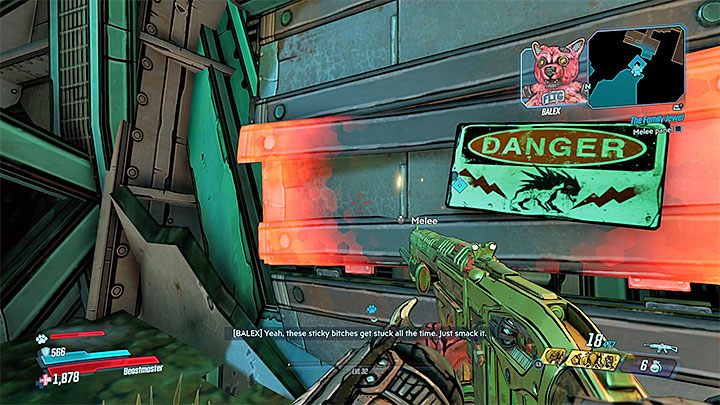 Continue your journey and wait until BALEX (the looted "living" teddy bear) unlocks the passage. You will reach the Wreck of the Family Jewel. Reach the designated panel and destroy it by using a melee attack. Treat the hydraulic pipes the same way. Doing so will allow you to board the ship.

Reach the button and listen to the first conversation with GenIVIV after pressing it. While exploring the wreck, you can only follow the indicated route or optionally explore the wreck for chests with loot and collectibles. Initially you will eliminate different varieties of Ratch monsters. Watch out for creatures with Badass markings. 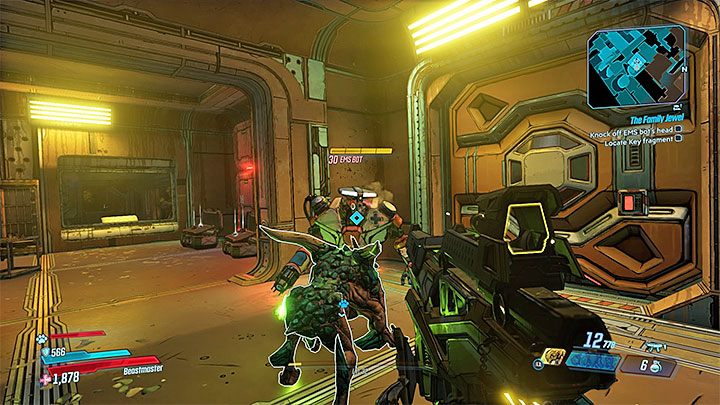 Grab the marked cables. The hero will be knocked down and enter the Fight for Your Life mode, but fortunately you won't die because you will be resurrected (Second Wind) by a bot. Let's go further. After encountering an EMS bot, aim for its head. After it's been destroyed, install a BALEX (talking teddy bear) in this place.

You can continue exploring the wreck. After the BALEX opens a new passageway, the battle in the Cargo Hold will start immediately. Deal with all the monsters that reside in the area. 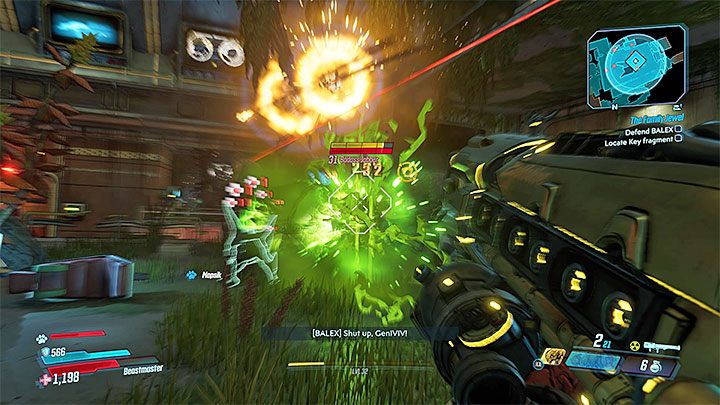 In one of the following areas you will be given the task of protecting BALEX working on the computer. A bot under his control cannot be destroyed, so focus only on getting the main character alive. After defeating all the bots, head for the loading zone. You need to destroy more machines and in between battles to continue the journey through the wreckage.

In the location of Security Bay you will run into a new large group of bots. You will receive an objective of protecting the BALEX again, this time from living monsters. Beware of Badass Jabber, who is tough and whose attacks will deal more damage. It is best to focus on him. Only after killing him deal with other creatures. These will include Burning Jabber creatures (fire damage) and Frosty Jabber (frost damage). When you get to the security door, you'll meet another Badass Jabber. He must be defeated. 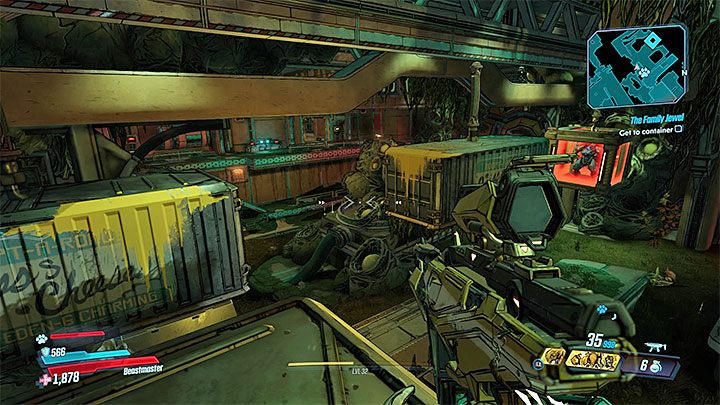 After the battles you have to take the BALEX teddy bear again. Continue the journey. Along the way, you'll run into some vending machines that may help you replenish your ammo. The main path will lead you to the location of Private Shuttle Bay. Defeat the bots and get interested in the hanging cage. You have to reach it by jumping on the hanging containers from the picture above. Always remember that yellow paint tells you that you can jump on an object and climb it.

After landing on a marked glass container, pull the lever to drop it. Come up to the mech and place BALEX on it. Kill new Ratch monsters that have spawned. 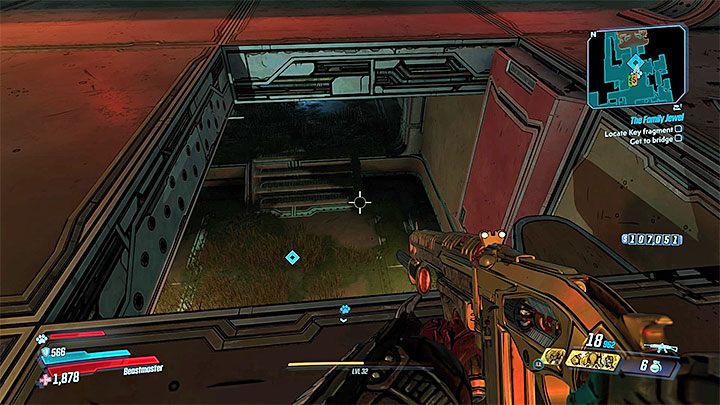 Use the exit from this location and continue your journey. Restock supplies and ammo when you reach new slot machines. It's wise to do so, cause a battle with new boss awaits you. Battle with the boss will take place shortly after jumping into the hole shown in the attached picture.

After getting to the bridge you will meet GenIVIV that controls another large mech vehicle. You'll have to wait until the BALEX' mech vehicle crashes into the room and crashes. The GenIVIV mech will lose its power field (shield) and combat will begin. 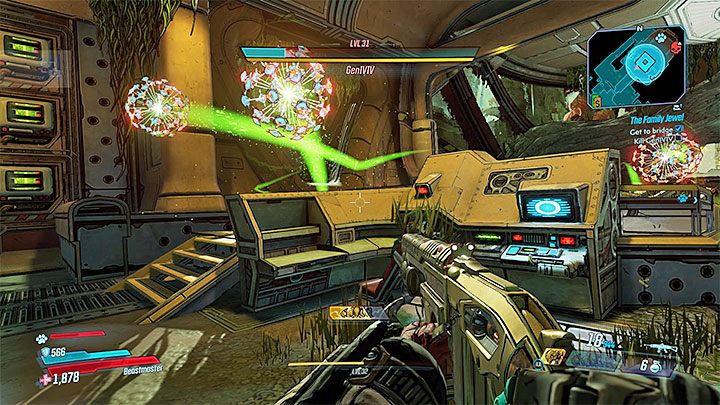 To defeat GenIVIV, you need to deplete its two energy bars - first is blue, then yellow. Expect a long battle.

The main problem in this battle are the big energy spheres sent by the boss. They bounce off the ground and walls - if you touch them, you can lose your own shield and lose health points. One of the ideas for dodging the orbs is to stand close to the walls and corners with your back turned towards them. Thanks to this, you will reduce the risk of getting hit by an orb from a side or the back. 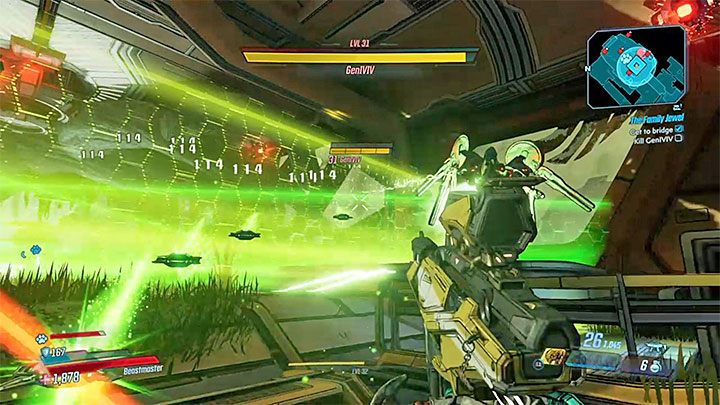 The boss can also shoot green projectiles - run to the sides and try to keep shooting. Something resembling barricades can appear on the bridge (yellow and green), but you can go through them safely. 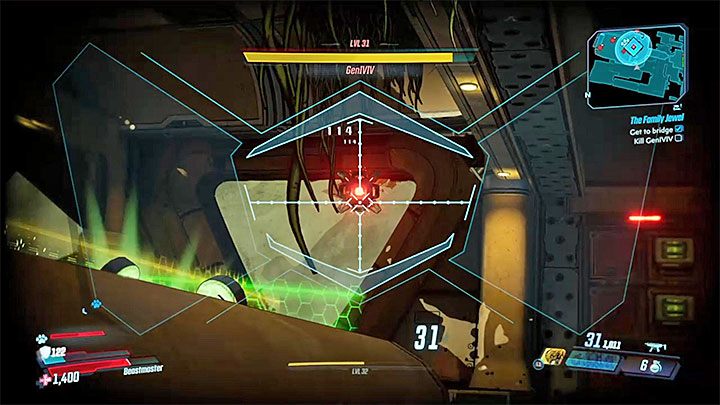 GenIVIV is accompanied by minions - flying spheres and GenION robots, who fight with melee weapons. Defeat these enemies when they are a direct threat, but not at any cost. As and in many other battles, they can you save from final death when your character is in Fight for Your Life mode. Shoot one of the minions to get Second Wind.

The defeated boss will leave behind credits, eridium, random equipment and a quest item - Vault Key Fragment . Also pick up the BALEX (teddy bear) from the ground. 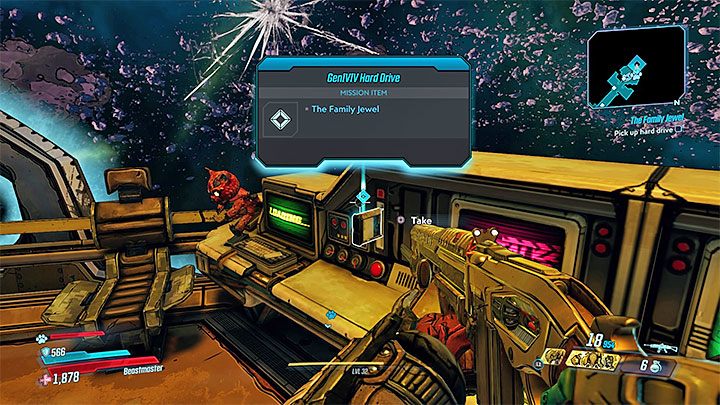 Use the fast travel option to get back to the Sanctuary. It will turn out that the GenIVIV has infected the ship's on-board systems and it has to be stopped. Head for the Captain's Bridge. Along the way you must destroy bots taken over by GenIVIV, but they are weak and during battles with various crew members.

On the captain's bridge watch the course of events and go to the remote console to install BALEX in it. Stay here and wait for the GenIVIV Hard Drive to appear. Go with it to Marcus' shop and give him this quest item. You can now give Tannis the key fragment. The mission will end. As a reward you will receive xp, credits and a rare pistol. Another major quest is Going Rogue.