This page of the guide to Borderlands 3 has a walkthrough for Blood Drive, one of the main missions. You need to return to Pandora and visit its new areas. During this quest, you will stop the huge Carnivora vehicle and defeat The Agonizer 9000, one of the bosses in the game. 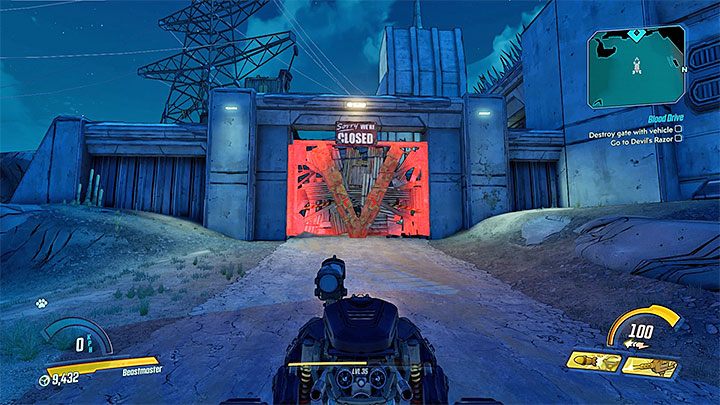 Use the fast travel option to return to The Droughts region on Pandora - this is the same region you have explored after completing the prologue. Lilith tells you to reach Devil's Razor. Go to the designated location. There, you will encounter a barricade - break through it with your vehicle (you can gain speed by using nitro boost).

Kill the enemies behind the barricade. The passage to Devil's Razor is nearby. This is Pandora's new region. As always, exploring it in 100% is completely optional. 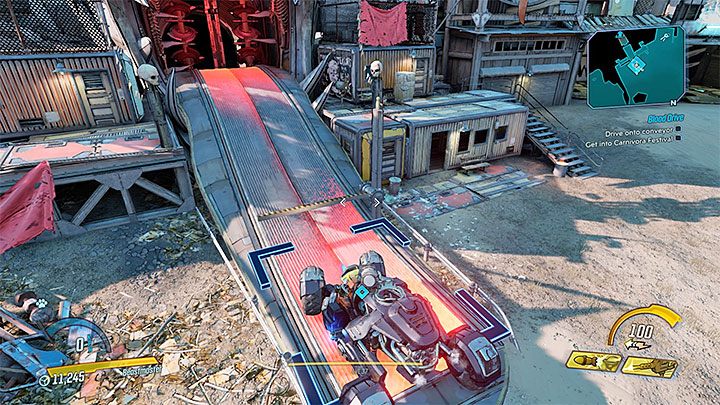 Go to Roland's Rest located on top of the hill. Reach that place and meet with Vaughn. You need to visit another new region - Splinterlands. Reach the specified transition to the next map.

Splinterlands is another larger region - you don't need to explore it in 100% to complete the campaign. Walk to the place where the Carnivora Festival is held. Park your vehicle on the conveyor belt and get out of it. Click the button to start the conveyor belt. Your car will be destroyed, but you don't lose it forever. Use a Catch-A-Ride terminal to respawn your last vehicle. 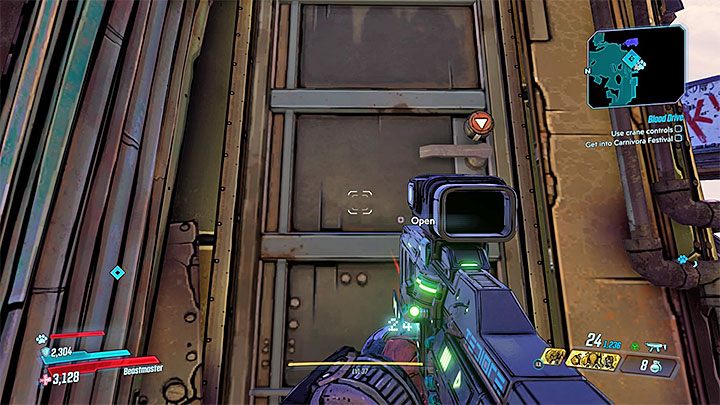 You have to look for another vehicle to be able to participate in the festival. Go to Big Donny's Chop Shop. Kill the bandits in the junkyard. Watch out for Badass versions of Psychos and Tinks. This location has two mini-bosses - The Big-D (run a lot and use attacks and weapons that can destroy armor) and Big Donny (focus your attacks on him because this enemy has two health bars). Get to the place where Big Donny died and find Big Donny's Keys.

Now you need to get to the top of the next building. Open the door presented in the picture. When you get to the top, use the console to drop down the unique Golden Chariot vehicle. Get inside and go through Sifted Mar to leave the junkyard. 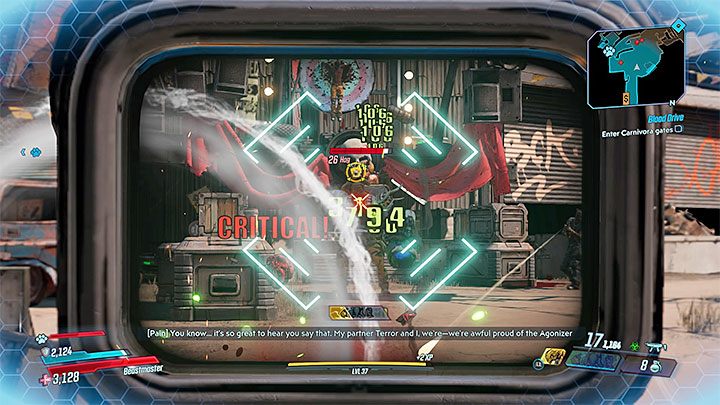 Return to the entrance to the festival and park the vehicle on the conveyor belt. Press the button - Golden Chariot will be accepted. Enter the small tunnel and move to the new location - Carnivora.

Go through Festival Grounds. Eliminate more fanatics. Take your time and carefully monitor the mini-map - due to the numerous buildings in this location, you can miss some of the enemies. Reach the elevator that moves to Carnivora's Playgrounds. 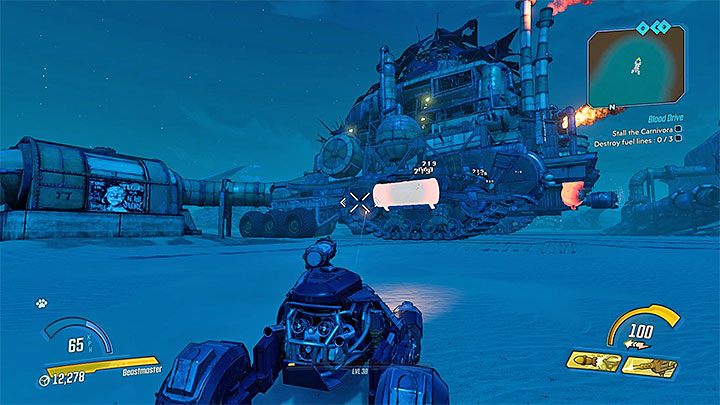 Open the large gate - you are in a large open space. Watch the cut-scene depicting the large Carnivora vehicle. This boss battle is rather unique. You don't have to destroy this giant machine, only immobilize it. Catch-A-Ride station is nearby. You don't need to use the Golden Chariot vehicle. You can also use the same vehicle you used earlier to travel around the world.

Start with chasing Carnivora - use nitro to gain speed. Fortunately, this mission has no time limit. The first task is to destroy three Fuel Lines. They are marked in red. You can attack them in any order and use any ranged weapon. 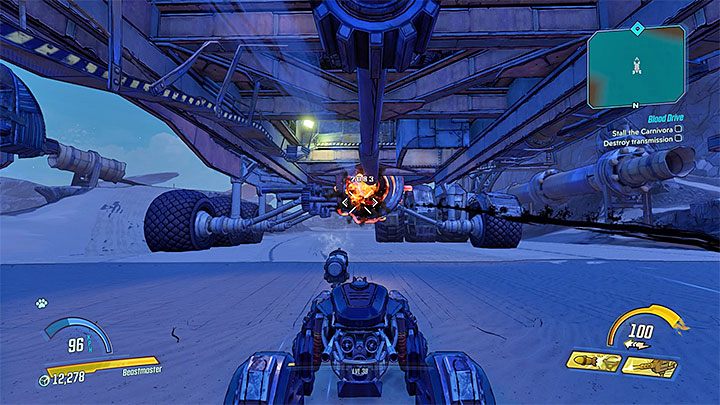 Another task is to eliminate Carnivora's guards. "Normal" vehicles are marked on the map. Just get closer to them and destroy. If your car is destroyed, you can use one of the many Catch-a-Ride stations located in this area.

The next goal is to destroy Transmission - you do this by driving beneath Carnivora. Shoot the transmission with any weapon. 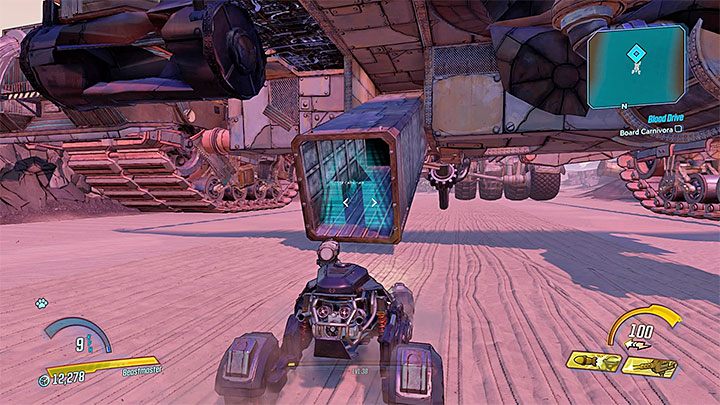 You must again deal with the vehicles marked in the game. When you destroy them, focus on blowing up the large tank. Destroy the tank to stop Carnivora.

Stop next to the huge vehicle, get out of the car and go through the opening (the picture above) to get inside the Guts of Carnivora. 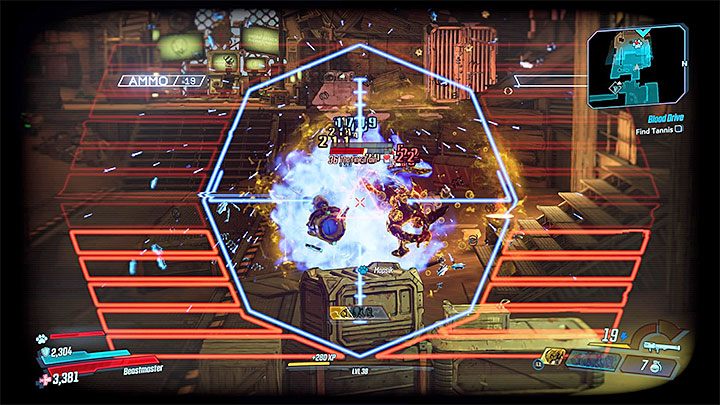 Go through the "insides" of Carnivora. Replenish supplies by using the vending machines located near the starting place. Watch out for elite opponents - you will face, e.g. Badass Enforcer and Badass Fanatic. Avoid contact with machinery flames (you can run fast through them).

Ultimately, you will reach Windshaken Catwalks. Watch out for the holes in the railing - you don't want to fall out from Carnivora. Defeat The Tink-Train in Mack's Head Room - attack this mini-boss from a distance. 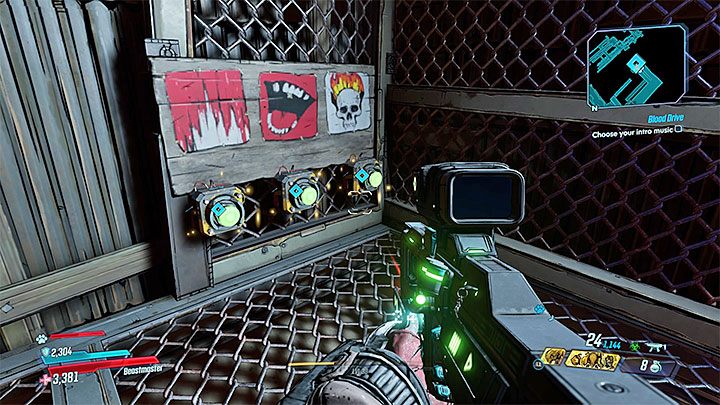 Reach the three buttons presented in the picture - each one of them plays different music while you are entering the arena. Before you press a button, collect supplies from the area - you are about to face a boss.

After pressing any button, go to The Main Stage. Enter the round arena and face another main boss - The Agonizer 9000. 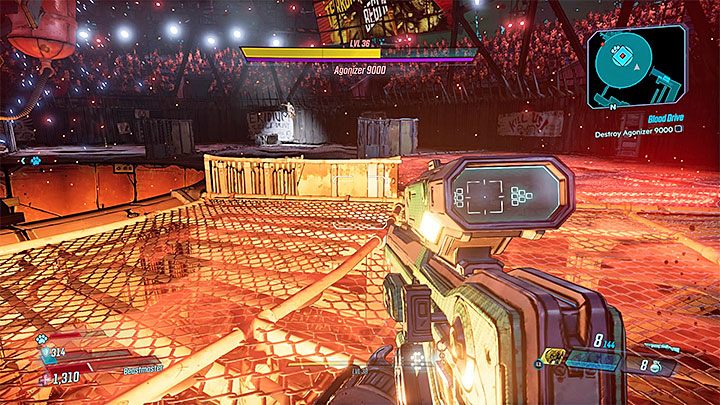 The boss fight takes place in a round arena and you have to move a lot to avoid traps and the big skull's attacks.

One of the most common attacks of the boss is setting fragments of the floor on fire. This works similarly to the battle with the Mouthpiece from the early parts of the campaign. Glowing floor informs you that this part of the floor will soon be covered in fire. This attack comes in two versions: 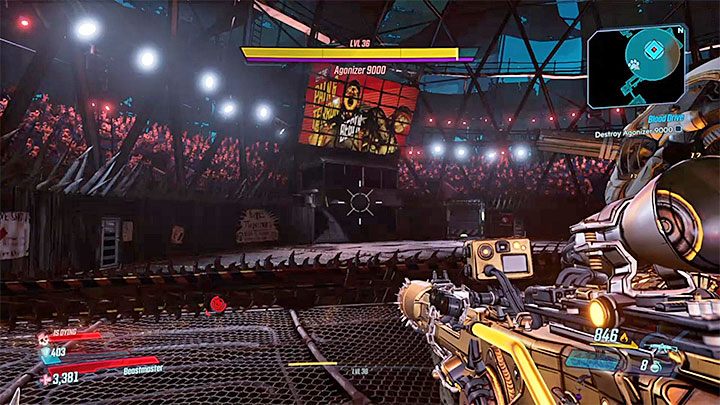 Another frequent and very annoying boss attack is the retractable rotating blades. The Agonizer performs one or more spins, which means that the blades will reach every place in the arena.

At first, the blades only move close the ground and you have to jump over them at the right moment. Later on, The Agonizer will get an "improved" version of this attack. The blades will be able to travel to a higher position - you avoid them by crouching down. Getting hit by the blades may deal massive damage.

If you play as a Beastmaster, then your pet hero won't be able to avoid the blades. However, this is not a serious problem, because the pet can't attack the boss, only its minions appearing in the arena. 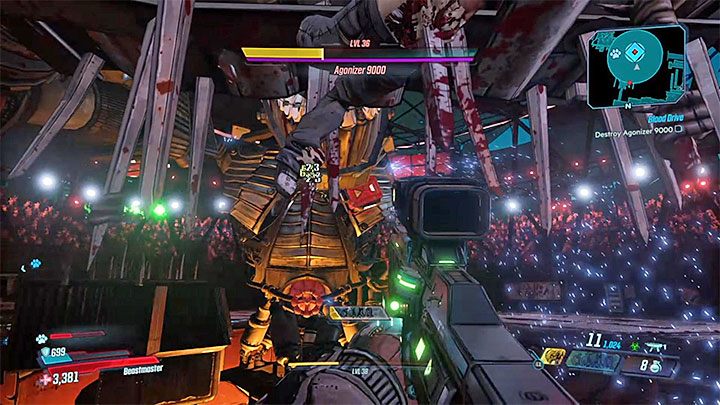 Other dangerous attacks are:

In each of these situations, the universal solution is to start running left or right as soon as notice that the boss plans to perform an attack. 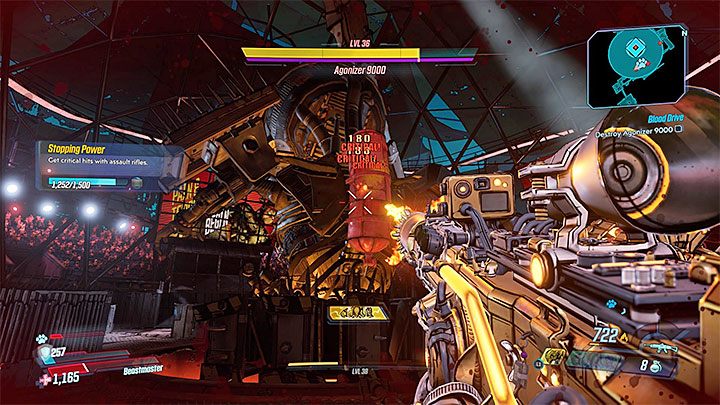 You can attack the boss continuously. However, a better strategy is to attack its weak points. They are:

Each shot aimed at a weak spot guarantees critical damage. This can significantly reduce the time of this battle, which by default should take more than 10 minutes. 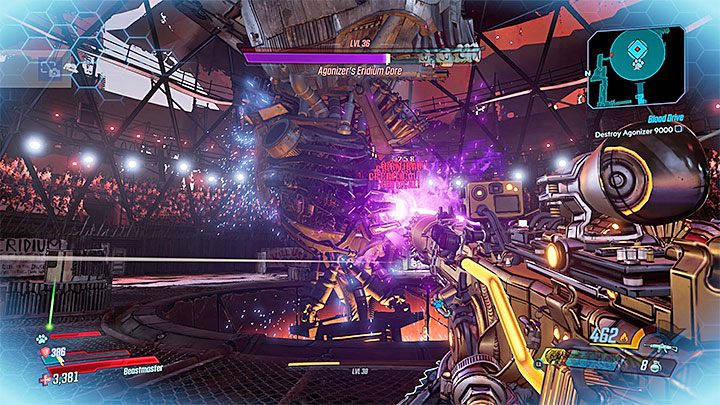 Fanatics, the boss's minions, appear regularly in the arena. Use the familiar tactic - don't attack them unless you are directly threatened. They can "help" you if you get knocked down and you go into the Fight for Your Life mode. Quickly track down a minion and shoot him with the best weapon you have to get Second Wind.

You first need to deplete the boss's yellow bar. When you start depleting his purple bar, you will move to the second phase which is much shorter. Wait until the boss is no longer immortal and only then proceed to attack it again. Locate Agonizer's Eridium Core and attack it with the best weapon. The core will shoot a purple energy beam that can do a lot of damage. Try to shot the core while you are standing a little to the side. Also, remember to run to the sides to avoid the beam. 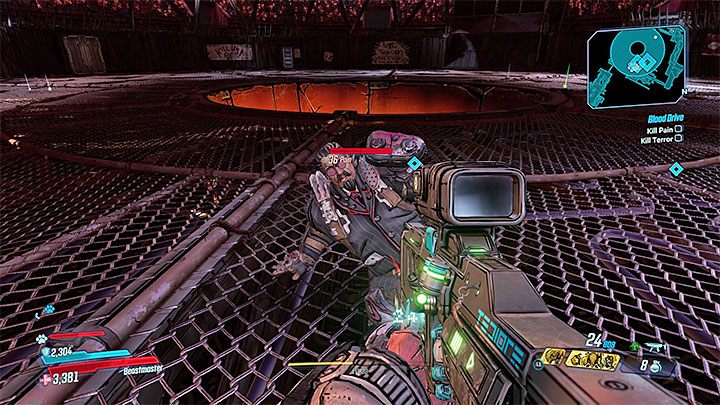 After defeating The Agonizer 9000, you also have to finish off Pain and Terror. They are defenseless. Remember to collect the loot that appeared in the area - credits, eridium and rare equipment.

Talk to Tannis to finish the quest. You get XP, credits and an epic cosmetic item.