This page of the Borderlands 3 guide contains a walkthrough for a storyline mission - Hammerlocked. This is the first of several story missions taking place on a new planet - Eden-6. During this quest, you'll encounter a few important characters. One of them is Hammerlock, who you will save by defeating Warden. 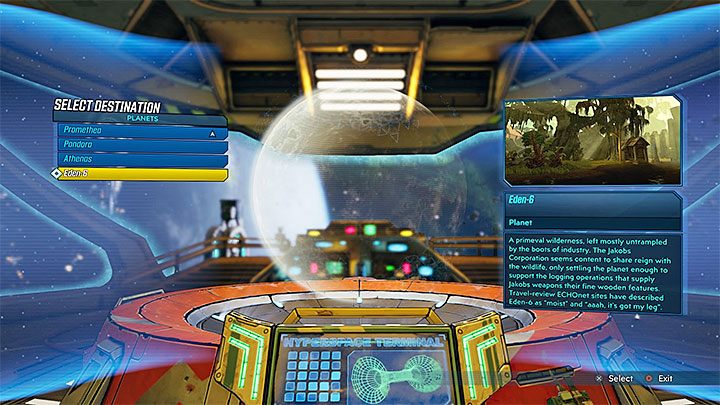 Listen to the conversation with Wainwright and use the navigation computer on Sanctuary bridge to set a journey to newly unlocked planet - Eden-6. Descend to the bottom level and go into the Drop Pod to travel to Floodmoor Basin.

Continue down the linear path to a location which contains one of the Catch-A-Ride stations. Call for a car and start following the directions shown by the game. Your destination is the Knotty Peak hunting house which is located on the top of the mountain. Along the way, you'll encounter standard opponents. After reaching the location, talk to Wainwright Jakobs. 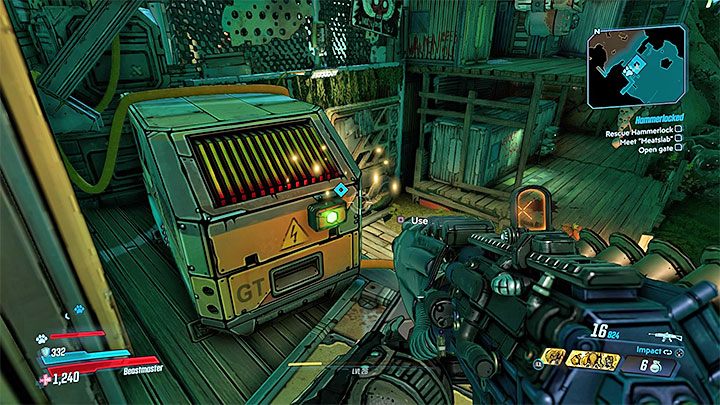 Before you leave the hut, take a look around and search for two large chests that contain random but valuable loot. Knotty Peak also contains all types of vending machines. Get to the Headliftand pull the lever to descend down to the Catch-A-Ride station.

Now you need to travel to The Anvil. After reaching the new zone, travel to the location where Meatslab is waiting for you. Defeat the first group of opponents and go through the angled container to reach a generator with a button, shown in the screenshot above. Press the button to open the passageway forward. It turns out that Meatslab is Brick, a character known from the previous installments who will accompany you during this mission. 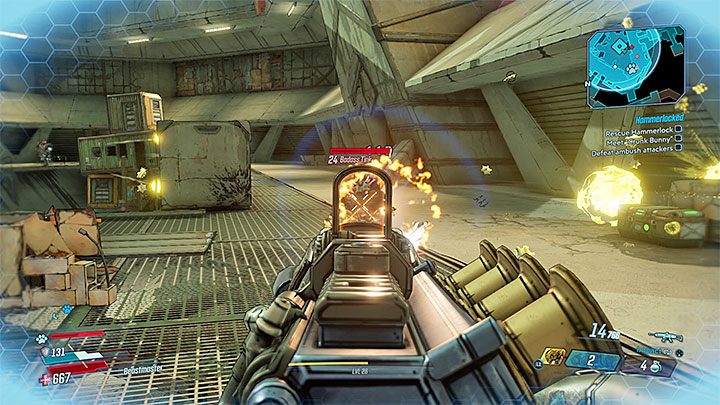 You have to help Brick in securing the courtyard which is inhabited by Children of the Vault fanatics. Brick is invulnerable, so focus on staying alive yourself. As always, watch out for Badass - remember to attack them from a distance.

After the battle, talk to Brick. You'll both enter a new zone. Remember to hit Enforcers in areas not protected by their shields. You will reach a location resembling an arena. It is best to fight at the top level in order to reduce the risk being caught by enemy fire to which you cannot easily respond. Watch out for incoming Badass. 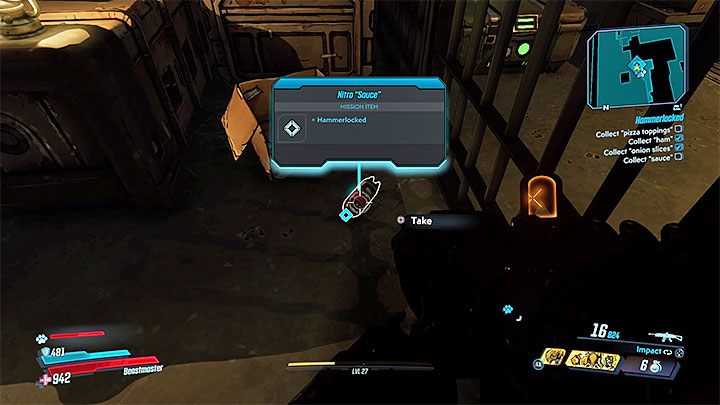 Talk to Brick and wait until he unlocks the path to an area with another known character - (mature) Tina. Talk to her to receive a task that sees you acquire a number of bomb components. Proceed to the large courtyard (The Yard). You don't have to clear it or explore its every nook and cranny. You can simply go in the direction shown by the map of the building.

All required items are marked on the map. You may encounter some problems while getting Nitro "Sauce". You have to jump in the shaft and search the boxes - the quest item is in one of them. Use the small elevator. Return with the gathered ingredients back to Tina and wait until she creates a bomb shaped like a pizza (Pizza Bomb). 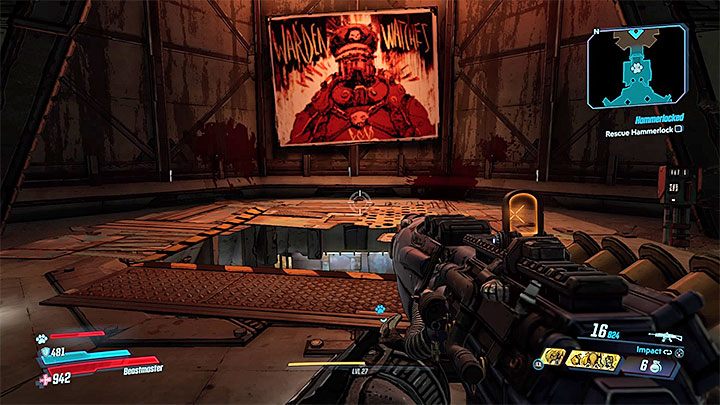 Travel to Ultramax Spire, a new location to which you need to deliver the "pizza". Mordecai, another old friend, will help you deal with the encountered opponents. You have to clear the bridge from opponents, including Badass Enforcers which will cause most problems. Attack them one by one when they are confused and exposed.

Place the bomb on the door and detonate it from a safe distance. Go through the door and start by collecting ammo from nearby chests (you can also return to the vending machines in the room with Tina). After jumping into the hole shown in the screenshot, you'll have to fight a boss -Warden. 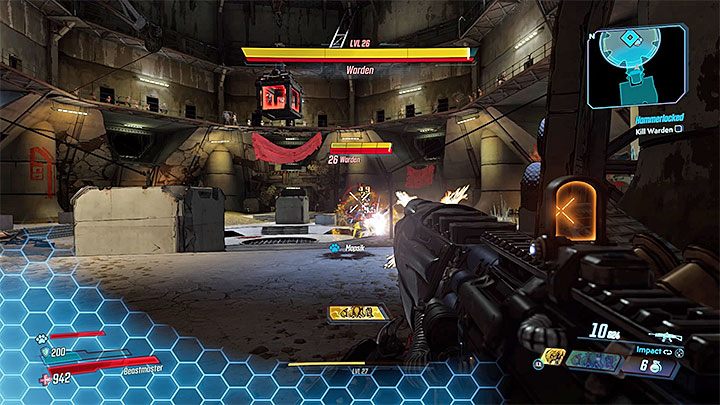 Warden relies on long-range attacks. You should respond with the same and fire at him from far away as possible. During the firefight hide behind large obstacles, especially when Warden is about to fire at you.

Every time the Boss loses 1/3 of the yellow bar, he becomes temporarily immortal. When that happens, stop further attacks and use the opportunity to repair your shields or search for supply crates. 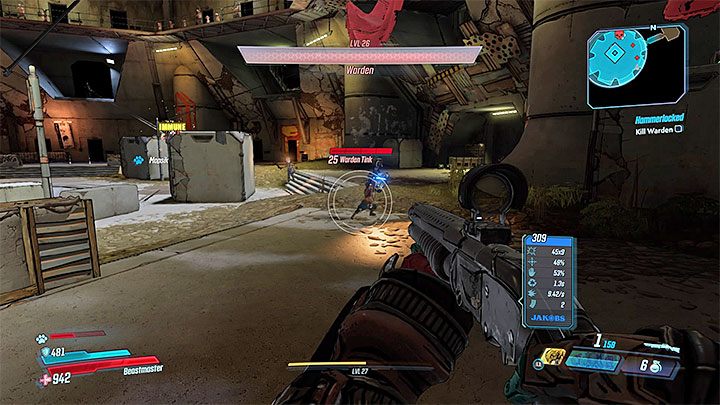 The next two phases play out exactly the same. Keep covered behind the obstacles and use your best ranged weapons to attack Warden from a distance. As the boss is rather sluggish, you can utilize your heavy duty weapons e.g. rocket launcher.

Aside from the boss, there are smaller enemies running around the arena. Simply ignore them, so in case of Fight for Your Life status, you'll be able to quickly fire at them and return to battle (Second Wind). 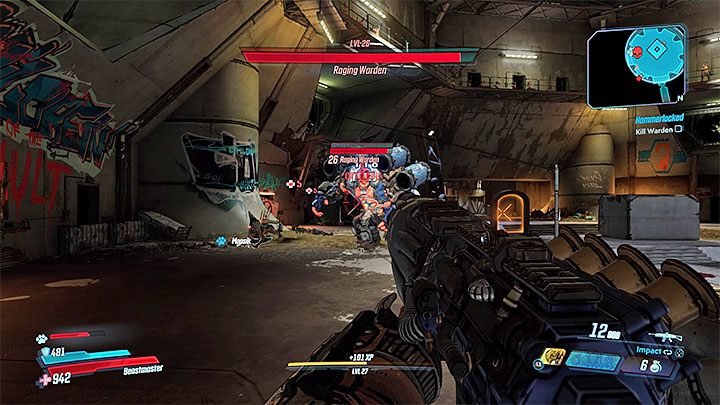 Once you have depleted all of the boss's yellow health bar, he will turn into Raging Warden. During this phase, the boss will try to catch you in melee range. Sprint often and avoid the boss while finding opportunities to engage him with ranged weapons. 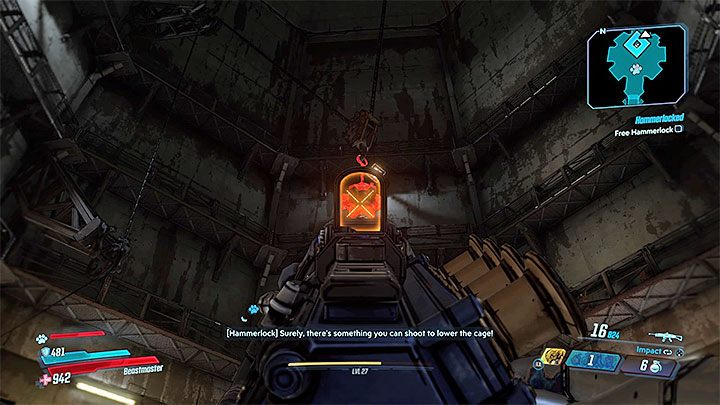 The defeated boss will leave a lot of loot - gather credits, eridium and random equipment.

Fire at the red hook above Hammerlock's cage to free him. You'll complete this quest and receive another - Lair of the Harpy. The rewards for this quest are: XP, credits, and an epic sniper rifle.