In this unofficial guide to Borderlands 3 you will find information about all of the most important game elements and in-game mechanics. This guide contains, above all else, descriptions of all four main characters. Samples of recommended builds were included to discuss each of the characters. They should help in creating a strong hero who can easily deal with threats.

An important part of our guide is the section with starting tips. It was designed with the beginner players in mind, for whom this is the first contact with the Borderlands franchise. Another important part of the guide is the FAQ section with answers to frequently asked questions. The following pages of this chapter explain, among other things, how to accumulate XP, how to reset skills, how to unlock vehicle travel, how to steal enemy vehicles, or how to acquire gold keys.

In our game guide to Borderlands 3 you may find a complete walkthrough of the main storyline. On separate pages we have also included descriptions of fights with bosses and other powerful opponents. All of this is complemented by the trophy guide, which features very detailed description of all of the game's achievements.

Borderlands 3 is another installment of a popular series of loot-shooters. This time, players can visit not only Pandora, but also a number of other planets. The scheme of the game remains the same - we travel through open locations, defeat opponents and collect more powerful weapons. We can play alone or in cooperation with other players (in split screen mode as well).

The action of Borderlands 3 takes place a few years after the events known from the previous installment of the franchise. The main antagonists of the game are Troy and Tyreen Calypso, known as Calypso Twins. They belong to the Sirens and lead a gang called Children of the Vault. 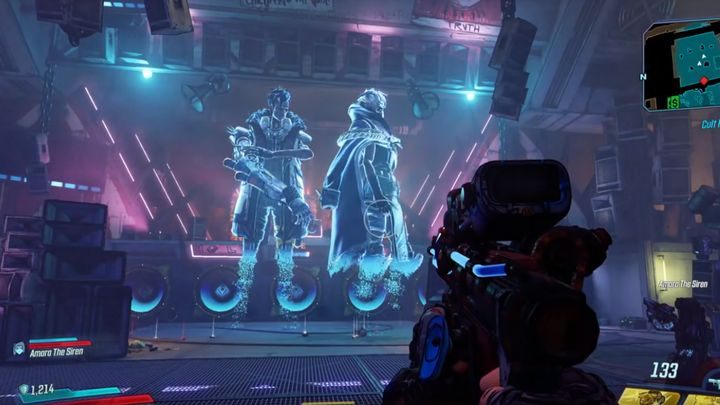 For the first time in the history of the series, we can leave Pandora and go on board of the Sanctuary 3 ship to conquer the other planets, such Eden 6 and Promothea.

In terms of game mechanics, Borderlands 3 develops the ideas from the previous parts of the series. The developers have not tried to revolutionize the model of the game, so fans of the series will easily be able to find themselves in this new part of the franchise.

How to use Sanctuary 3?

Sanctuary 3 works is a mobile base in Borderlands 3, which, with a special panel, allows you to travel between planets. In addition, this ship is filled with all sorts of shops where you can buy new models of weapons. 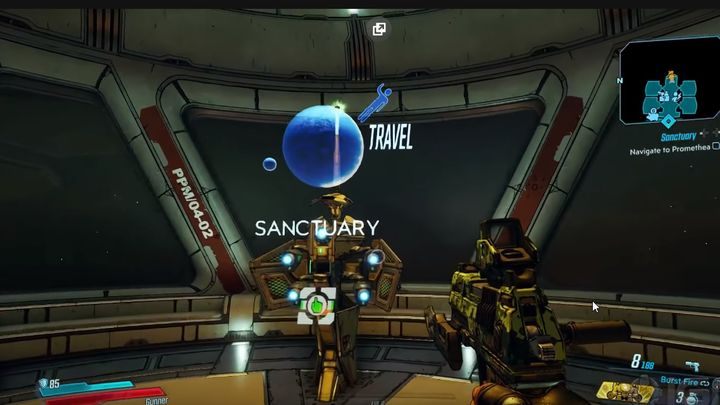 You will also find a deposit to store your selected inventory items. Once aboard, you can also find a Golden Chest. If you have one of the keys designed for this chest, you can open it to get legendary equipment. 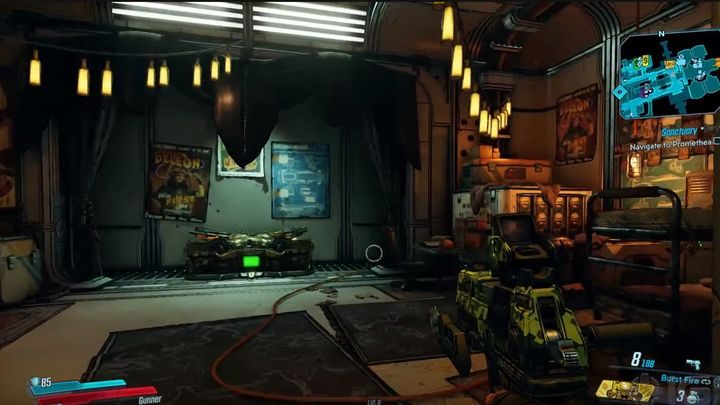 Aboard Sanctuary 3, you will also find a panel that allows you to change the appearance of your character.

Can I play Borderlands 3 by myself?

Yes. In Borderlands 3 you can play alone in solo mode or in a team of up to four players in co-op mode. Two players can play on a split screen.

Borderlands 3 - So Happy Together Trailer

Can I purchase Borderlands 3 on Steam?

For now, the game is an exclusive position of the Epic Games Store. Borderlands 3 will become available on Steam one year after its premiere.

How long will it take to complete Borderlands 3?

According to the game developers, the main storyline should provide 30 hours of gameplay.

Will we encounter characters from previous parts of the game in Borderlands 3? 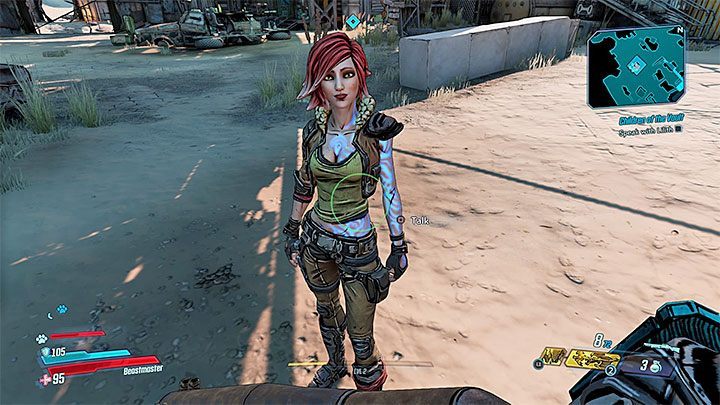 Yes. The game features many characters familiar to fans of the Borderlands 3 series. None of them, however, is a playable hero in Borderlands 3. New protagonists are fresh characters.

Some of the most important characters you'll find in Borderlands 3 are: Lilith, Claptrap, Brick, Moxxi, Crazy Earl and Tiny Tina.

Will Borderlands 3 have a cross-play feature?

Yes. Borderlands 3 will offer cross-play support, however it will not be available right after the premiere. 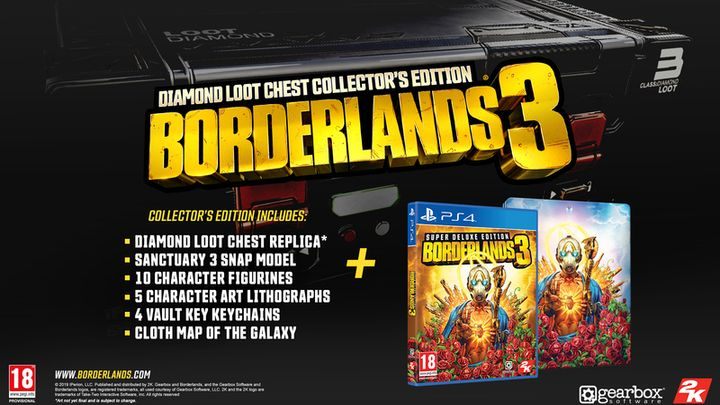 In addition to the standard version, Borderlands 3will also offer a collector's edition which includes: the full version of the game, steelbook, season pass, a set of gold skins for weapons, additional digital content, a replica of Diamond Loot Chest, 10 character figurines, 5 lithographs of game heroes, 4 vault key keychains and a cloth map of the galaxy.

How do I save game state? 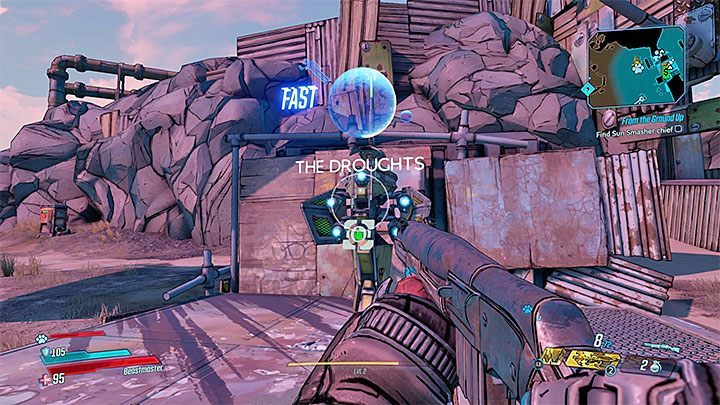 There are no manual saves in Borderlands 3. Everything is saved automatically. The game can save your progress when, for instance, you approach one of the fast travel points.

If you want to end the game, it is recommended to choose the option to return to the main menu from the pause menu. This ensures that you do not lose any progress related to character development, loot collecting, or completing tasks. When you resume the game, you will be taken to the nearest checkpoint.

Why does Borderlands 3 not work after selecting DirectX 12?

Unfortunately, this is one of the most serious problems experienced by users of the PC version. At the time of the preparation of this guide, the problem has not yet been solved by the developers. As a temporal workaround, you can launch the game after forcing DirectX 11. The method doesn't work in 100% but should help most users.

6) Save the changes and close Notepad.

The game should run properly in DirectX 11 mode.

Can I skip the intro videos?

Unfortunately, no. Watching the animation of the producer, publisher and dancing Claptrap is required each time when you launch the game. 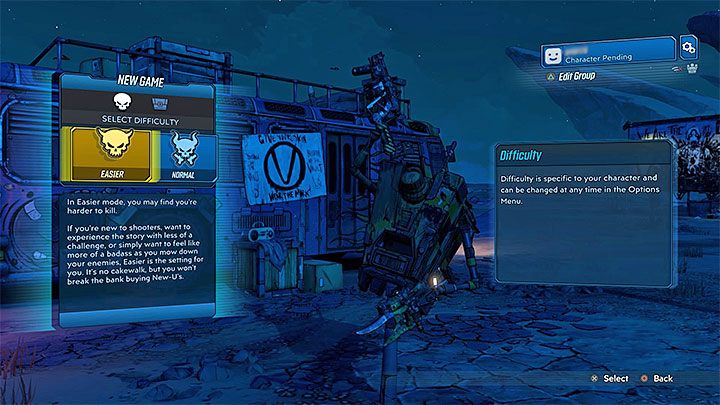 Yes, unlike the previous games, Borderlands 3 allows you to choose Easier difficulty level. It has been prepared with beginner players in mind and is characterized by reduced damage inflicted by opponents.

Even if you stayed at the normal difficulty level, remember that in Borderlands everything revolves around enemies' experience levels. Try to attack enemies who are at a close or lower level. If a quest's recommended level is much higher than yours, focus on side quests and exploration to earn XP points to level up.

You can change the difficulty level after starting the game. Open the options menu and click the Gameplay tab. Find the first item on the list.

Is it possible to have a per in Borderlands 3? 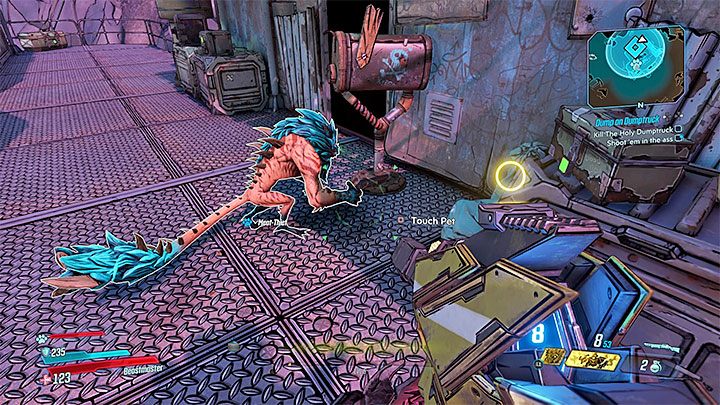 Yes, Fl4k (Beastmaster) can have pets. You can choose from three different pets - Jabber, Guard Skag and Spiderant Centurion. Each pet not only looks different, but also attacks opponents in different ways. As you progress through the game, you can unlock many abilities that make pet's attacks stronger or make them more durable. There is also the possibility to replace a pet with its stronger, slightly different-looking version.

Borderlands 3 also allows you to Touch Pet, but unfortunately, there is no animation of this action. 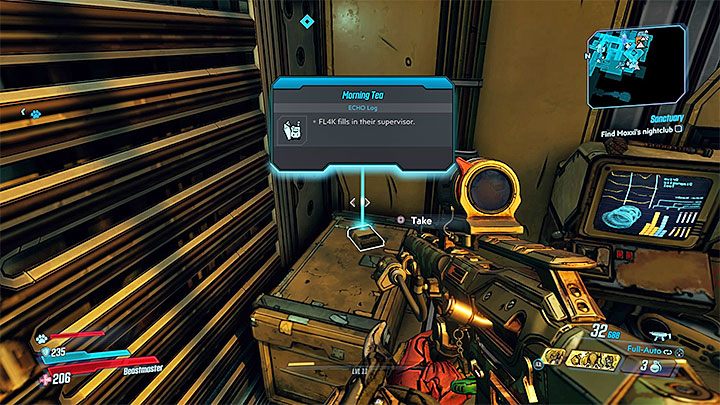 Yes, you can find secrets. Each location has Crew Challenges that you can complete. They can, for example, focus on searching for unique cars, mini-boss dens, dead Claptraps, Typhon Logs, or Eridian Slabs. In addition, during exploration of the area, you can stumble upon, e.g. ECHO Logs which are often associated with the main characters.

You can check the collectibles by browsing the tabs in the Log.

Can I change the name of my character? 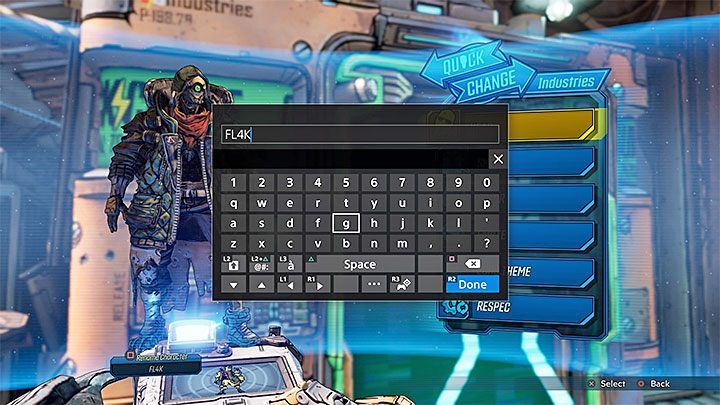 Yes, you can change the hero's name (for example, Fl4k). You must visit any QuickChange station. Select Rename Character. It is worth noting that if you play as Fl4k, you can also change the name of your pet.

Can I change the appearance of the vehicle? 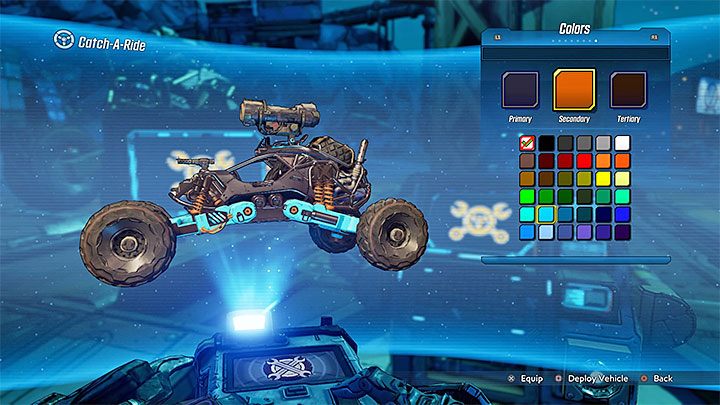 Yes, this is possible by reaching any Catch-A-Ride station. You can choose one of the preset colors or independently determine the color of the individual elements of the body. In addition, you can install new parts and weapons that change the statistics of your car and its armament. For more details, check the Vehicles page.

Why doesn't the map open? 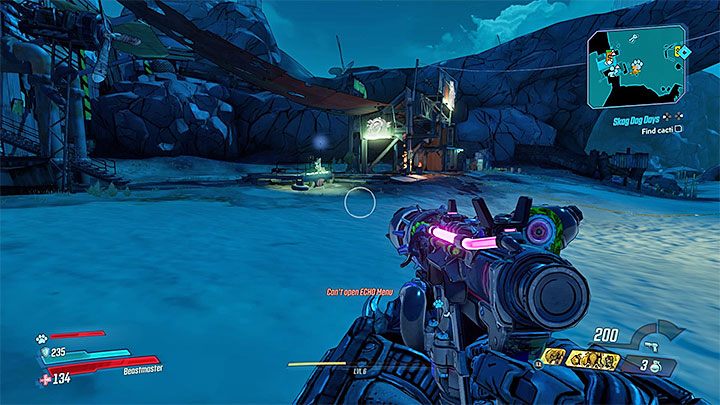 You can get the following message - Can't open ECHO Menu when you try to open the map immediately after starting the game. This is a common bug - it occurs because the necessary data is still loading in the background. Wait a few seconds for the game to finish loading, and when you press the map button again, it should open without any problems.

Does Borderlands 3 enable you to play as the characters from the previous installments? 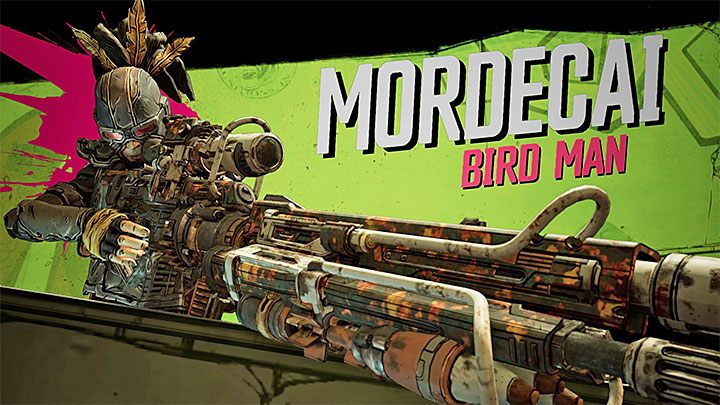 Unfortunately, no, but many heroes from the previous installments appear as NPCs. They can, for example, help the players while completing some of the missions or to win some of the battles. Nevertheless, you cannot take direct control of them or give them orders.

What is the difference between Cooperation and Coopetition modes? 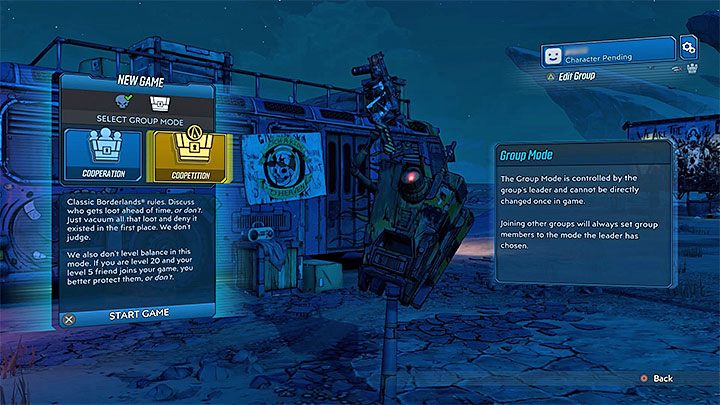 At the beginning of the game, you can choose whether the gameplay should follow the rules of Cooperation or Coopetition. The differences between these modes are significant:

How many chapters does Borderlands 3 have? 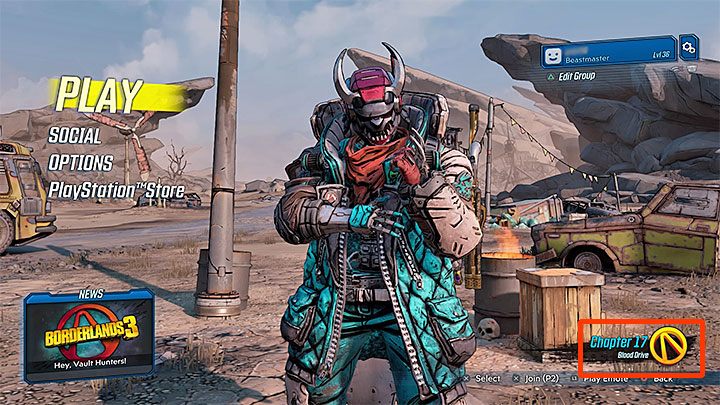 Why is the quest exclamation mark missing? 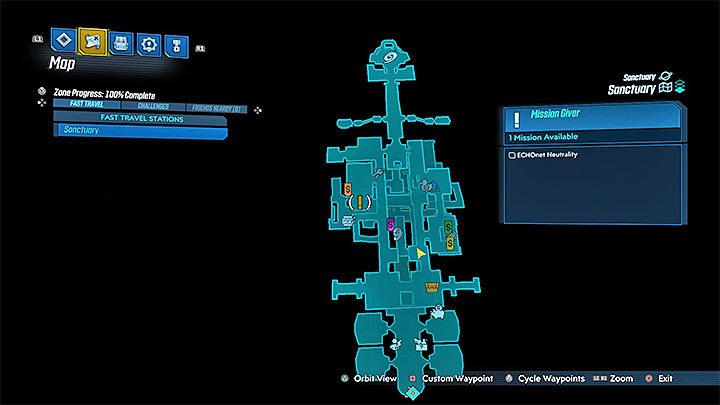 In Borderlands 3 side quests are marked with yellow exclamation marks, but they may disappear or vanish unexpectedly. This is a result of imperfections and bugs in game mechanics. A problematic quest may be, for example, ECHOnet Neutrality from the Sanctuary. This quest may be visible when planning a fast travel to the Sanctuary, but it will disappear when you arrive on board the ship.

The solution to the problem is always the same - get to the place where the exclamation mark was visible on the fast travel map. Some exclamation marks only appear when you are close enough quest commissioner. To avoid problems, we recommend that you take up all the side quests you find right away, as once an exclamation point is discovered, it can disappear again if you ignore it (and move further away from it).