Almost the last land in the game and the first with the not so aggressive Aztecs, not so, because its one of the easier lands in the entire game. 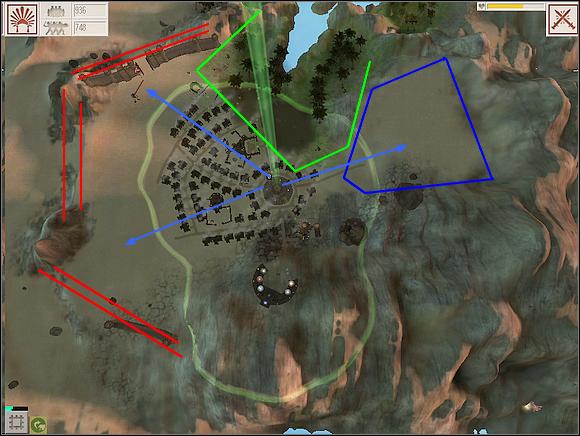 Being the god of good, Your task like always is capturing the hearts of Your enemy's people with the help of a beautiful city. Near the area at which You start, there is a lake - the land near it (green lines) is the most valuable land. Don't build anything on it, just place fields there. Build up Your city toward the desert and the 'impressive' hill (blue lines). Place the walls for Your defense between the rocks - three sections (red lines).

The people from nearby villages and cities should rather quickly join You. The first time I played this land i thought of conquering - by building houses, so that I would have a lot of people for the army, and without much effort, 4 groups of people joined me. 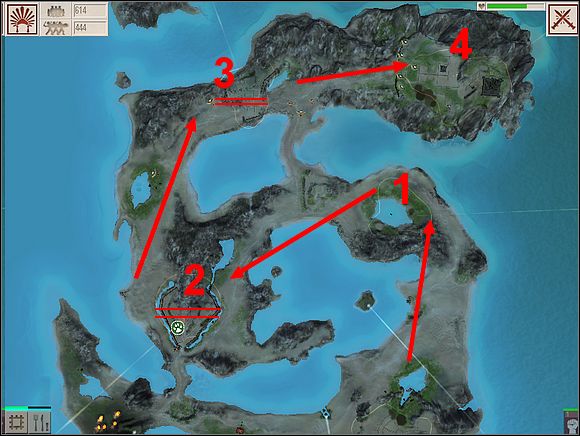 If You wish to conquer the Aztecs by force, You won't have a lot of opportunities for big battles, the map is very humble with the terrain, and maneuvering here is minimal. Like always, use Your creature to its maximum potential. He should already be a master at fighting. Send him out and slowly kill off enemy platoons that are stationed in the area. Be very careful with the archers, they shoot with flaming arrows which light up Your creature and handicap his ability to attack.

The road to the first village is blocked with a wall. If You wish to quickly take over the village, send Your creature to blaze the wall down. If You wait a long time and You'll defend from enemy attacks, the wall will become deserted and You'll have a free way through.

City two is pretty well garrisoned and has a wall around it (underlined cities are cities with walls). Simply sending Your creature might end in failure, so try to eliminate the platoons stationed near the walls (outside) one by one, and those in the city...

City three, although has a wall, is quite weak and without any fear You can weaken them with Your creature. Destroy the gate with him and go into the city to take care of the platoons stationed there. After that, bring over one platoon and capture the city.

To finish the land, You just need the Aztec capital. By now, their army should be quite humble. Use Your creature to kill the archers on the walls and to destroy the gate. Kill the rest with Your army which You should have at least 200 units and should be kept in readiness.