The first land in which Your opponent won't be inactive and will often attack Your capital. It won't be massive battles, but from time to time it's wise to control the situation near the walls since Your inactiveness can end with You 'waking up' when Your buildings are already falling.

The beginning is as usual - start the basic construction of the city (storehouse, grain fields, altar etc.). As I mentioned before, on this level You can be attacked by the enemy, that's why place Your creature near the road leading into the land (but make sure he's out of range from the nearby catapult - on the hill), thanks to which he'll stop the oncoming enemy platoons. In the quest tab, there is an objective mentioning about only attacking under the cover of night. If You want to complete it, change the time of the day when the enemy is getting near. 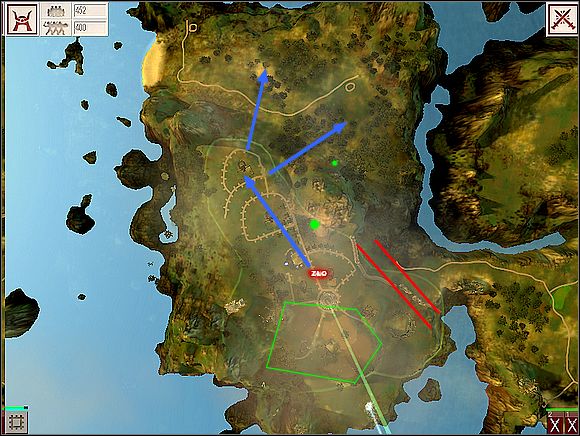 The beginning build up won't differ much from the previous ones, but this time walls (red lines) will be extremely useful, that's why build them as soon as possible. The enemy platoons will walk up to the walls and stand there, not doing any damage to You, and You'll, from time to time, send a fire miracle or Your creature at them to take care of the problem. It's going to be worse when the attack will be assisted by a catapult, that's when You have to act quickly (Your creature will destroy it with one hit).

Build up the city in the 'north' direction (orientate using the picture - blue arrows), since the 'south' (terrain in the green figure) area is fertile land and use it for Your fields. The limited ore will become a pain (green dots - mines), thats why use mainly wood which there is plenty of, and You can create trees Yourself by planting the trees and watering them. Buildings that don't need ore but increase impressiveness a lot are the altar and plenty of villas.

The ore You gain from the people that join You, use on the most needed and the most impressive buildings. 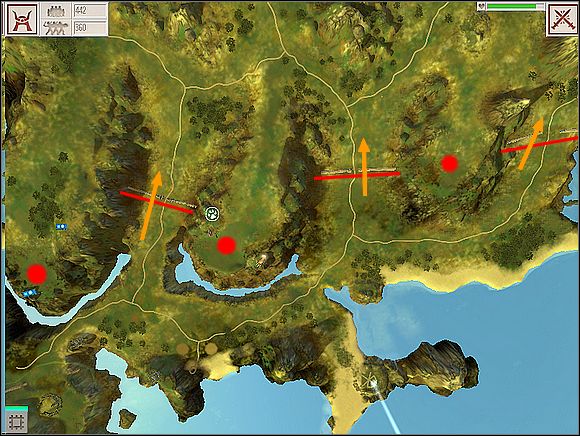 Being evil, build up so that You have a large number of men and You can create a large army. To make the people breed faster, place a lot of basic houses, a couple of nurseries, and keep the food stocks high.

But before You create an army, don't waste time and send out Your creature on a special mission. Inland, there are a lot of scattered enemy platoons and catapults (red dots on the hills). Your creature should easily do the job, and thanks to that, later on You won't have much trouble conquering those terrains.

The road to the hills is blocked by walls (three red lines on the picture above). Get through them by destroying the gates. To do this without any endangerment to losses, first get rid of the archers stationed on top of the walls by placing Your creature on a certain distance ('place' the leash in the ground). Once he senses the archers, he'll attack them by throwing the fire miracle at them (which You should already have bought). After that, just walk up and destroy the gate.

Once the area is cleared, start creating an army as quickly as possible, so that You'll have at least 150 soldiers (best if in two platoons). 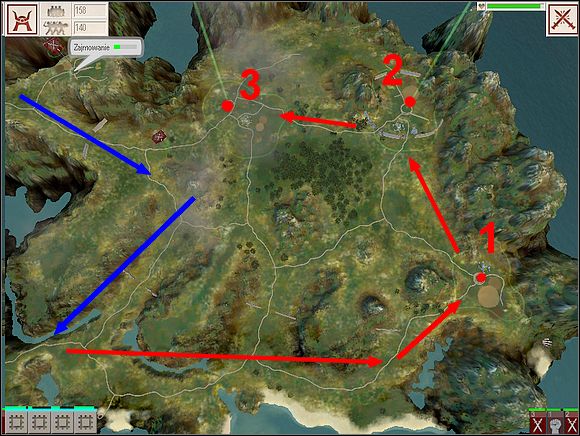 Conquer just as the arrows show, moving by the 'south' beachside. Always place Your creature on the front, his task is to clear the area, especially killing the enemy's platoons in the cities which You'll first take over.

The first village is the easiest one to conquer and You shouldn't have any trouble doing so. In the second one, the wall, archers on it, and the catapults stationed there are the main problem. To successfully conquer that city, take Your creature and make him take care of the obstacles. Take down the gate the same way as before. The biggest trouble will be village four since it's diseased. Don't send Your armies there under any circumstance since they'll die from the disease. First You have to heal the village, and You will do so in the quest "Cure the sick town" (details in the 'Land six - quests' section).

The blue arrows show the way which Your enemy will send his platoons onto Your city from time to time - watch out and don't let him surprise You - keep the gates to You capital closed and when his platoons will be near, destroy them with the fire miracle. 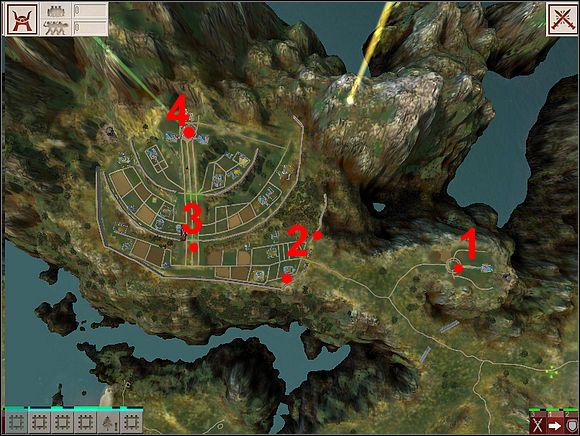 The last step to victory while being 'evil' is taking over Your opponents capital. For this attack, make a bigger army so that You'll have about 200-250 soldiers. First conquer the last village (point 1). Thanks to the influence line, heal Your troops and Your creature there. Point 2 shows where the wall is and the enemy archers that are stationed on it. Kill them using Your creature (if there is a need, retreat and heal him).