After beginning the game in the next land You'll watch a short scene in which You'll meet Your rival and his creature.

After that is done, put Your followers to work, create: four farmers and three breeders of each sex, some lumberjacks and miners (later on, regularly make more of each).

At this moment there are two paths, You determine which one to choose. Either finish the land by increasing impressiveness and gain people, or destroy Your enemy by capturing his capital and the villages.

In the instance of the 'good path', the tactic is the same in every mission. You have to build up Your city so that it will be maximally beautiful and safe (just the wall needs to be built for it to be safe). Place as much different buildings as You possibly can. Place a lot of decorative buildings and attend Your peoples needs. Also, create buildings indicated by the 'town hall'. When people are going to come to join You, remember to open the gates, if they wait too long, they can die (while opening the gates, watch out for the enemy trying to sneak in - it's best to have one small platoon ready). 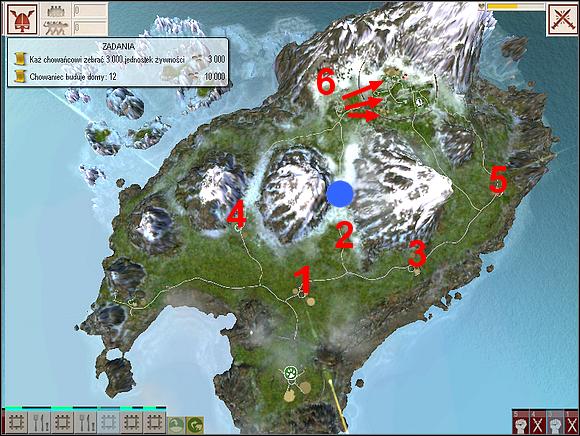 Being the god of war, Your task is to conquer the enemy's villages. On the map above, I pointed out the order in which to conquer in. Create two platoons of about 30 soldiers and send them into different points. Also use Your creature (with the soldier role on). His main task should be destroying the enemy's army before it can get to Your city/conquered-villages. The strategic point at which he should be stationed at most of the time is the passage between the mountains (blue dot). In that point, the strongest enemy platoons move and it's easy to destroy them there.

After You have conquered the villages 1 through 5, take most of Your army and take over village 6. Concentrate all Your platoons there (inside the influence line) and heal Your soldiers. You can also increase Your strength by completing the silver scroll quest "Legion of the undead" (details in the 'Land four - quests' section).

To attack the capital city of Your enemy, first destroy the gate, and parts of the wall where enemy archers are stationed at with Your creature. Afterwards, send him and a platoon (about 50 soldiers) onto the enemy's creature.