On this page of our guide to BioShock Infinite you will find the second part of a detailed walkthrough of Chapter 36 - Hand of the Prophet. The main character's task is to stop enemies traveling by other barges. Eliminating the threat will allow Booker and Elizabeth to reach the Comstock airship. 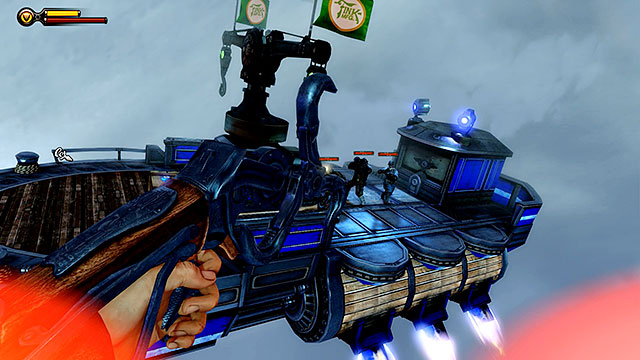 Soon after leaving the port new barges belonging to Comstock and the Vox will start heading your way and they will be accompanied by Mosquitos. Use the maintenance hooks mentioned earlier to move between the barges, allowing you to close the distance on enemy units.

It's recommended to use the Undertow vigor during this battle, because eliminating groups of enemies at the same time will allow you to save on time and ammunition. It's also important to know that each of the attacking barges contains some salt, medical supplies and weapons. Eventually you'll get to the zeppelin. You will explore it in next chapters of the story campaign.