On this page of our guide to BioShock Infinite you will find the second part of a detailed walkthrough of Chapter 32 - Comstock House. The main character will be forced to fight the boss - The Boy of Silence. Our description explains how to avoid being detected by the Boy of Silence and how to deal with him. 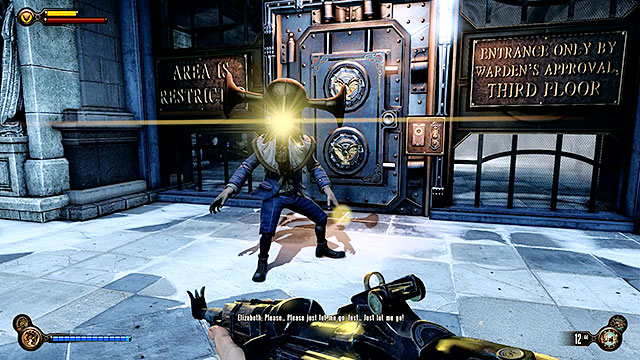 After you've entered the building start moving forward and you'll soon reach a closed gate that's guarded by a Boy of Silence. This is a new type of an opponent. The boy is powerful and you'll encounter more of them while exploring Comstock's house. A very important thing to know is that you won't be attacked by the Boys of Silence unless you make too much noise or find yourself standing in beams of light their masks are emitting.

Notice strange beings wearing Benjamin Franklin masks that accompany the boys - none of them will attack you as long as you remain undetected. It's not possible to kill the boy himself after he detects you, because that's when he'll possess one of the "Franklin's" and use that body to organize the attacks. Deal with the first Boy of Silence and then press a button he was guarding.