On this page of our guide to BioShock Infinite you will find the first part of a detailed walkthrough of Chapter 30 - Downtown Emporia. As the hero walks through the Emporium, he has to eliminate Voxes and police troops. Snipers, Handymen, Firemen and Patriots will be more difficult to eliminate. It is worth looking everywhere and collecting all the treasures. The destination is the gate of the Comstock house, which will have to be explored. 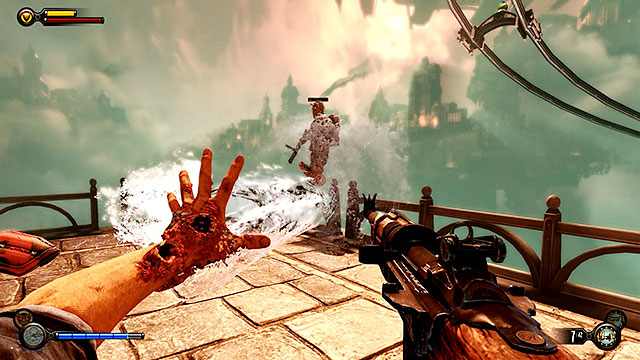 As soon as you leave the elevator you're going to be forced to take part in a pretty challenging battle with the Vox and the police. It's recommended to deal with the reinforcements using barges as soon as possible, because a new Handyman will soon join the battle.

The best place from where you can organize your attacks on weaker foes is a balcony located opposite the elevator and you can reach it thanks to a sky-line. You can also summon a Mosquito so that it will start flying above the balcony. Another good method is to start pushing enemies off the ledges using the Undertow vigor. 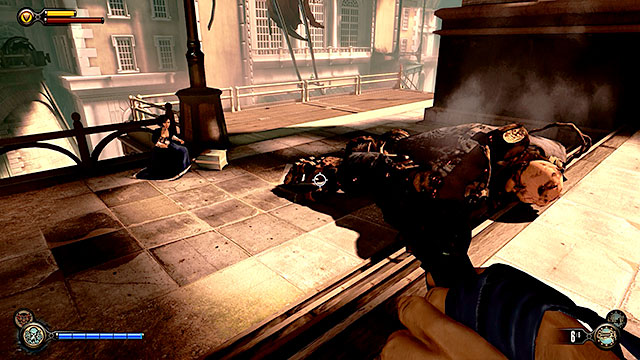 Be careful when using sky-lines after the Handyman has joined the fight, because if you're going to hang on the Sky-Hook for too long he can electrify you. The best way to defeat this opponent is to use a Volley Gun or a Grenade Launcher and both of these weapons can be found on the balconies under the sky-lines. Another important aspect is to exploit nearby tears. Once you've defeated the Handyman don't forget to examine his corpse to collect Gear #28. 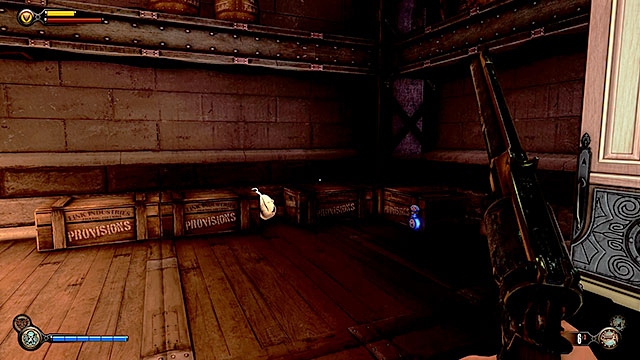 Once you've won the battle in front of the bank climb on a balcony mentioned above and ask Elizabeth to use 3 lockpicks on a nearby door. You'll find some salts on the other side of the door, as well as Voxophone #58 and a Heater. 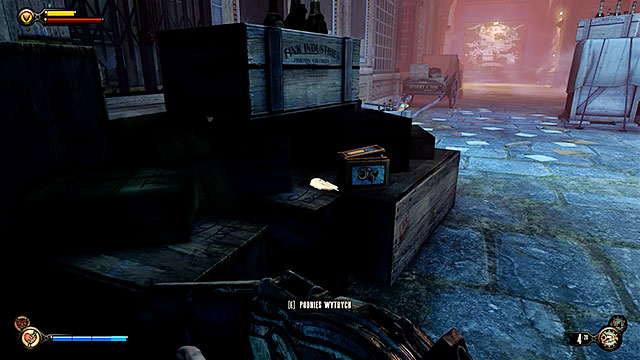 Return to the plaza level and open a gate leading to the Harmony Lane (use the map added on the previous page if you need help with directions). Find a new lockpick on one of the crates (next to the ammunition for the Grenade Launcher). 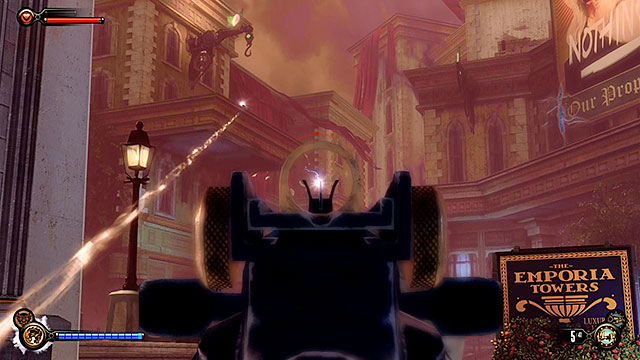 You're going to be attacked by snipers occupying nearby rooftops after entering the Harmony Lane. If you want to quickly get closer to them then you should use a tear located on the right side of the alley to summon a maintenance hook. The right side of this location also contains a second tear (near an information board) and it summons a sniper rifle. 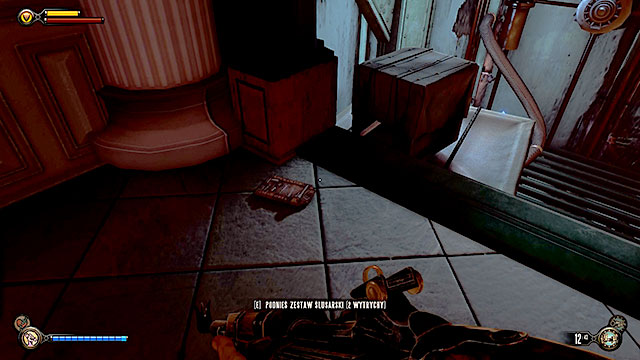 There's an apartment building near the tunnel exit (second door on the left) and you can break in without using any locks. Find a locksmith's set near a broken down elevator. 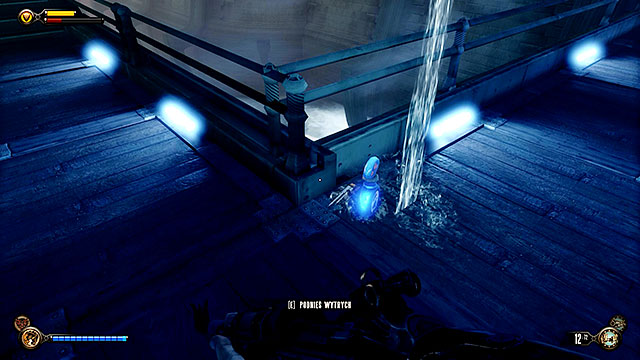 Leave the apartment building and check the area under a nearby platform. You'll find a lockpick and some salt there. 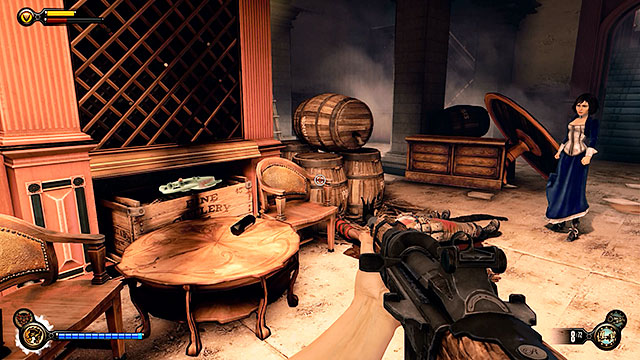 There's a bar on the other side of the bridge, inside the right building. Enter the bar and then proceed directly into the cellar. Defeat three drinking revolutionists and take Voxophone #59 from a crate located under the wines. 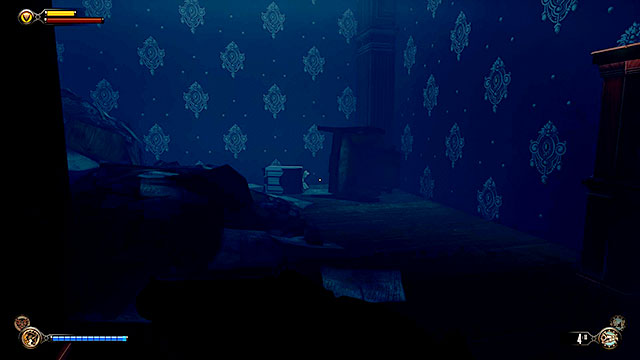 Keep travelling through the alley and you'll notice a locked store to your left. Use 3 lockpicks to open the lock, enter the building and use the stairs to get to the top level to find Gear #29. 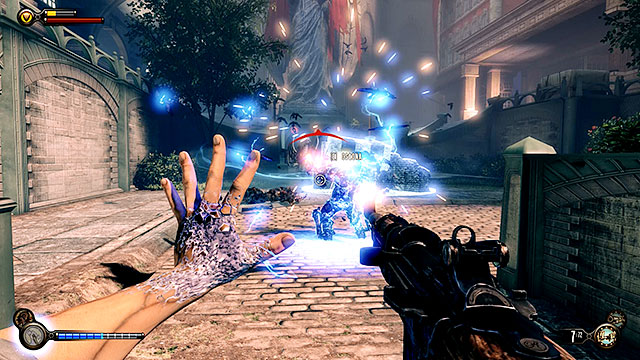 Walk past the Photo Studio (don't go there right now). Kill all the enemies in the alley (Vox forces, a Fireman and a Mechanized Patriot). 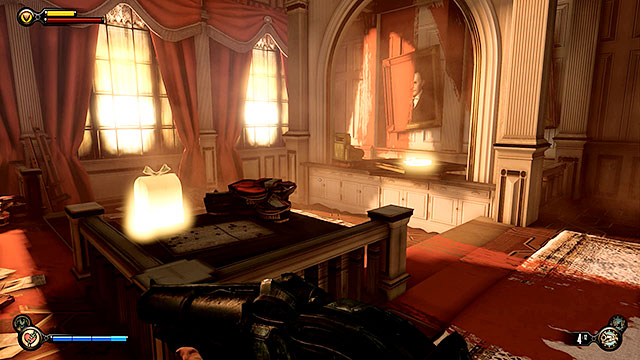 Once you've won the battle open a locked store with some paintings which is located on the left side of the alley. There are two important items being stored here - Voxophone #60 and Gear #30. 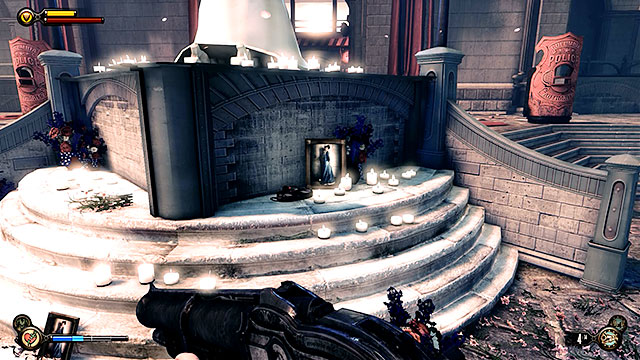 Return to the alley and keep moving until you reach Z.H. Comstock Victory Square. Approach Lady Comstock's statue located in front of the "prophet's" home. There's a Voxophone #61 on the stairs behind the statue. 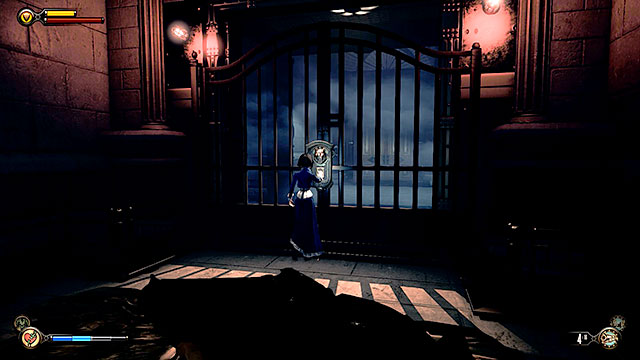 You may now approach the gate of the Comstock's house (point number 1 on the map) and interact with a fingerprint reader. Listen to a short conversation with Elizabeth before proceeding to the Memorial Gardens.