On this page of our guide to BioShock Infinite you will find the first part of a detailed walkthrough of Chapter 18 - The Good Time Club. Booker has to fight with more waves of opponents appearing on the stage. They will include Fireman, Raven and Patriot. The battle may not be that hard as you think, because you can open some tears. In the further part of the level you will explore the back of the club where you can find some secrets. 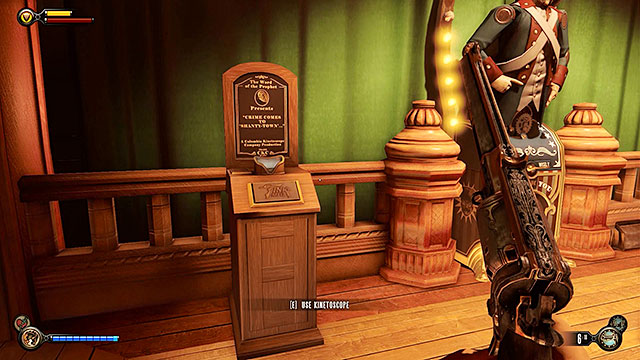 Locate a vestibule after entering the club and use the stairs to get to the upper floor. You'll find a machine here used to upgrade weapons and Vantage point #24 - Kinetoscope. 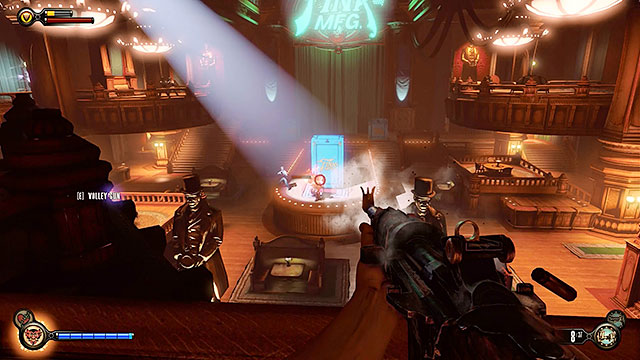 The first wave of enemy units will appear on the stage moments after entering the main area of the club. A new Fireman will be among the people you need to neutralize.

If you plan on using a weapon suited for long range kills, then it's best not to use the stairs leading to the stage. Weaker enemies will come to you and you'll have an easier job disposing of the Fireman without engaging him in direct battle. Don't forget to inspect the Fireman's body when he's dead to find a lockpick. 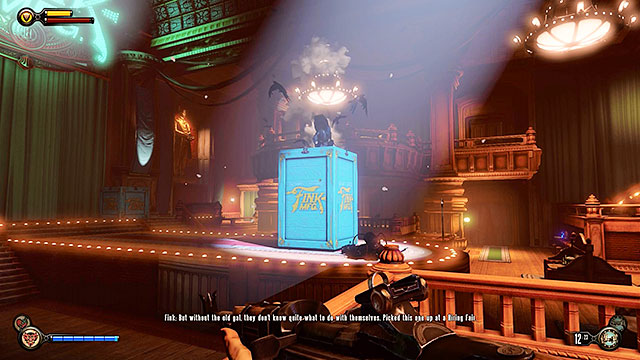 Once you've eliminated all enemies from the first wave a new Crow will appear on the stage. This isn't your first duel with this type of an opponent, so you should now how to react. After the Crow is dead deal with his helpers. 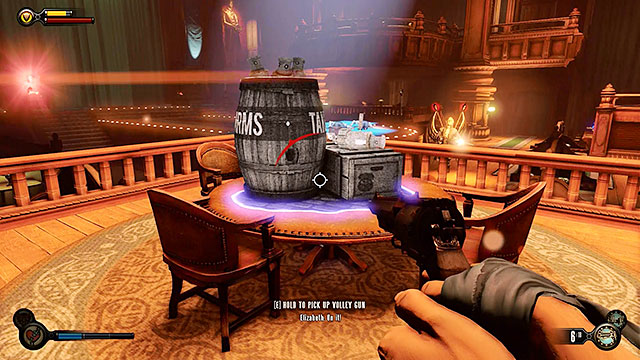 The last surprise Fink has prepared for you are various types of machines. You'll be dealing with stationary turrets, Mosquitos and a Mechanized Patriot. The Volley Gun will be very helpful here and Elizabeth can summon this weapon by opening a tear located on the left side of the stage.

It's recommended to use tables and bar counters for cover and in case you'll start running low on health or salts check the areas reserved for the audience. 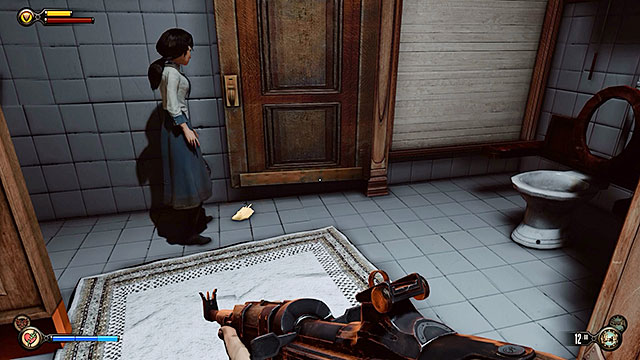 After you've passed "the interview" proceed to the toilets located opposite the stage. The right toilet contains a new lockpick. 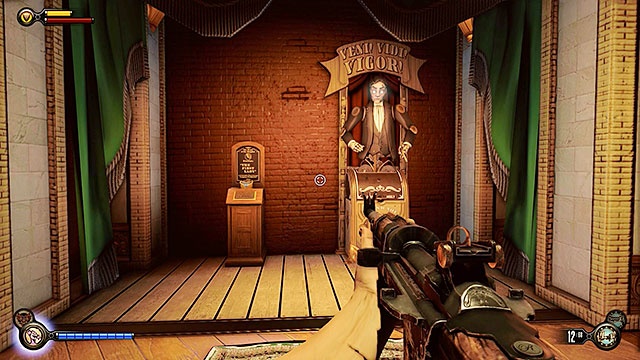 Go past the toilets and at the end of the corridor you'll find the Veni! Vidi! Vigor! vending machine. There's also Vantage point #25 - Kinetoscope here. 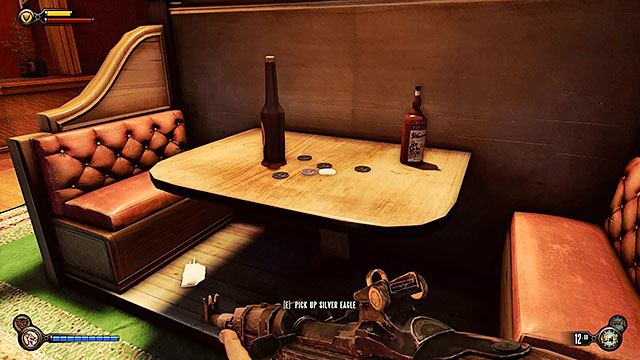 Proceed towards a small bar located to the right (there's a Dollar Bill vending machine near the door leading to it). Check the left side of the bar to find a lockpick hidden under one of the tables. 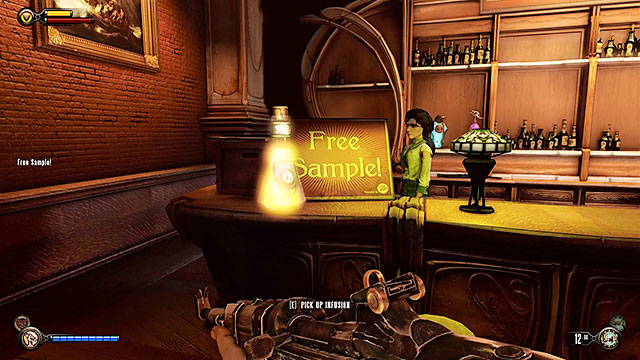 There's an Infusion #13 on the bar's counter, next to the "Free Sample!" sign. Also - make sure to look behind the counter to find two vigors and a shotgun. 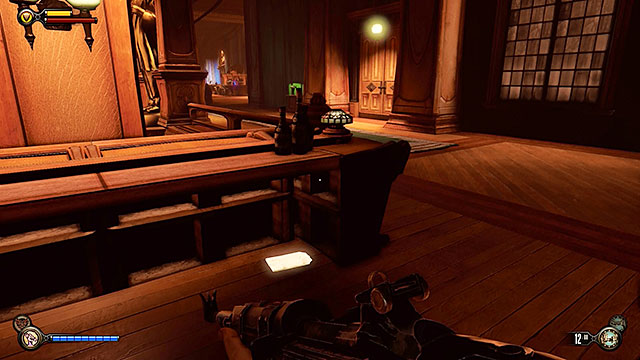 Leave the bar and use the stairs to get to the upper floor. There are 2 lockpicks hidden behind a minibar to the left (when facing the stage). 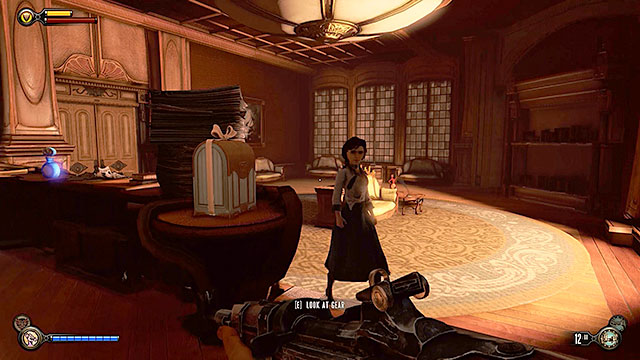 There's a room with a fireplace nearby (it was previously locked) and obviously you should explore it. Approach the desk in the saloon and find Gear #18 - Feet hidden beneath a stack of papers. 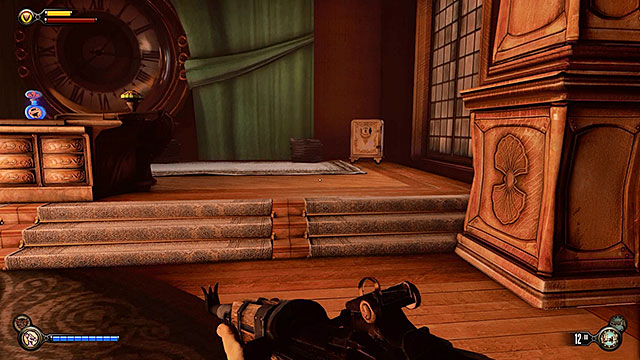 There is a safe near a large clock behind the desk and it can be opened by using 3 lockpicks. The safe contains about 200 silver eagles. 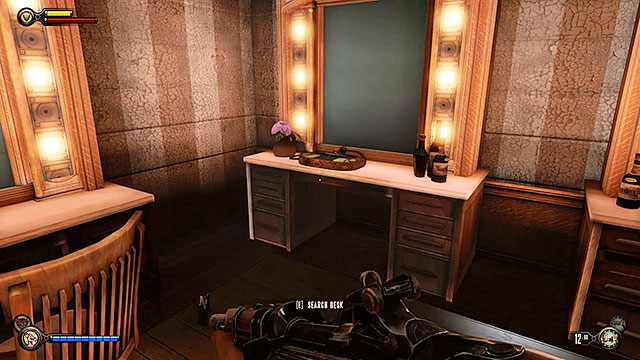 It's time to go behind the stage. The first room you'll get to contains a Voxophone #40 and this collectible can be found in front of a mirror. 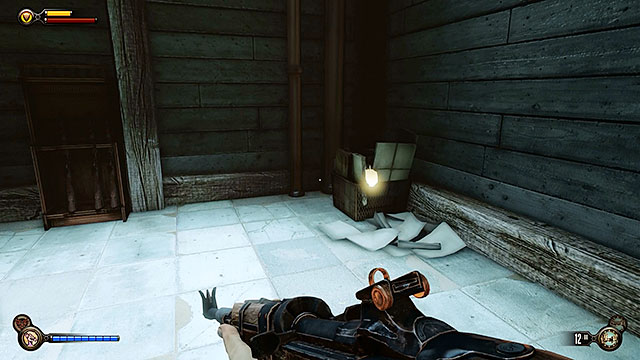 Use the stairs to get to the cellar where you'll encounter two policemen. There's a smaller room to the left (opposite the hallway) and after opening a door you'll uncover a lockpick and some rifles.