On this page of our guide to BioShock Infinite you will find the second part of a detailed walkthrough of Chapter 8 - Soldier's Field. The battles in this part of the chapter are mandatory. During the exploration of the pavilion you can search many rooms. You will obtain new vigor and an important quest item - the code book (cipher). In the final part of this section you will also get a sniper rifle. 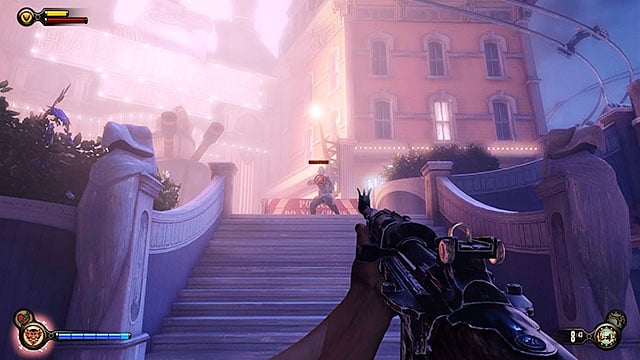 You will now have to fight your way back to the beginning of the promenade. A small unit of police officers will stand in your way and all the stores you've visited recently will now be closed. Locate a gate leading to the Hall of Heroes. You'll find an elevator here, but don't use it just yet. 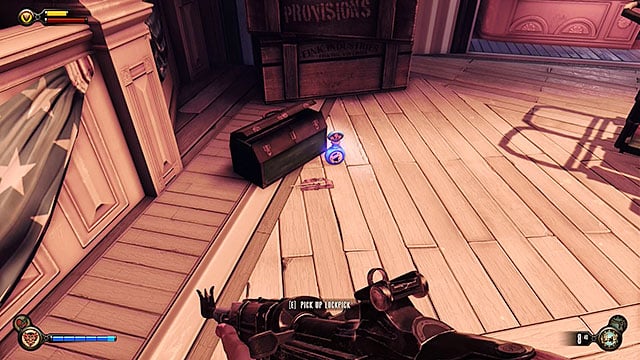 There's a tool box near the elevator and you can find a new lockpick next to it. You should now go back to the security office in the Soldier's Field Welcome Center, because you probably have 5 lockpicks with you and therefore you can open the safe that contains several hundred silver eagles. On your way back to the Hall of Heroes you can also revisit the ice cream shop and steal from the unguarded cash register. 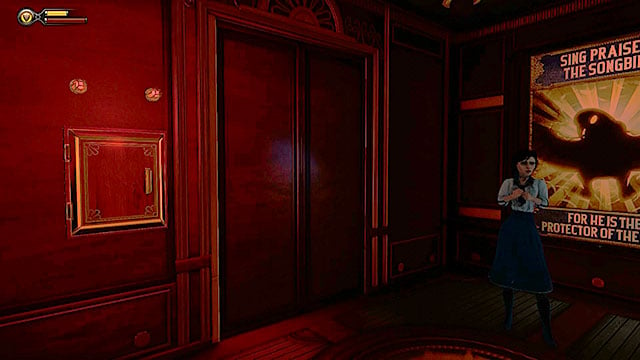 When you're ready to continue enter the elevator and press a button. The elevator will stop at half way and as a result you must open a fuse box in order to repair it. 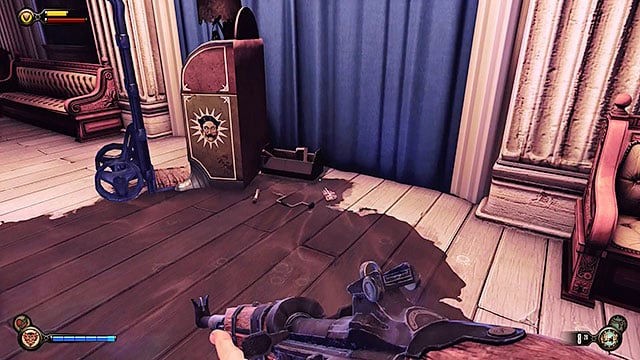 Wait for the elevator to transport you to your destination and explore the pavilion, collecting medical supplies and a shotgun found to the right of the Motorized Patriot. Go behind a fallen statue of a soldier. Explore the area near a broken down vending machine and you'll collect a lockpick that will come in handy real soon. 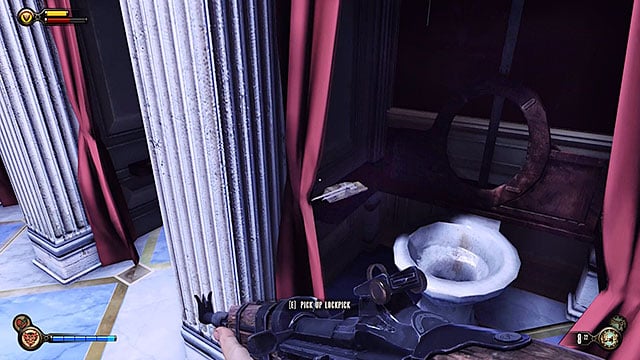 The bathroom to the right of the damaged vending machine is occupied by two policemen. Shoot them before they figure out what's going on and then explore the room. The opposite bathroom contains one more lockpick found next to one of the toilets. 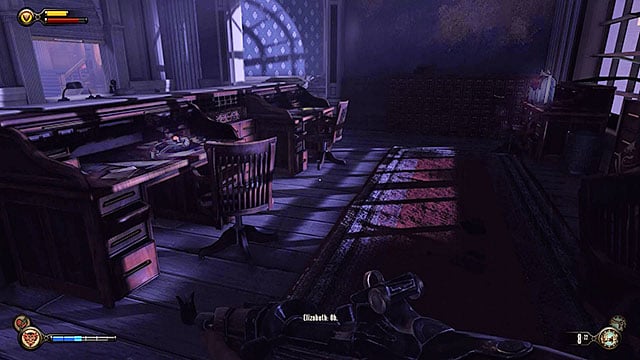 Once you have both lockpicks with you go to the left side of the pavilion and ask Elizabeth to open a nearby door. There's a turret on the other side and it guards an office. Deal with the turret and then explore your surroundings, finding Voxophone #25: Never Seen the Face - Capt. Cornelius Slate under the window and Gear #6 - Torso. 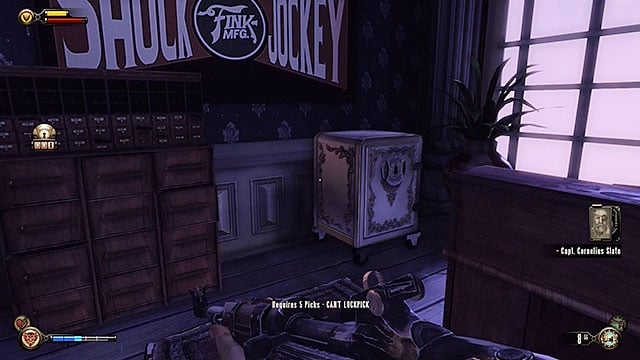 The study that was guarded by the turret contains a new safe and once again you're going to need 5 lockpicks to open it. You don't have enough of these objects at the moment, however you will revisit this area at the end of the next chapter and that's when you should break in. 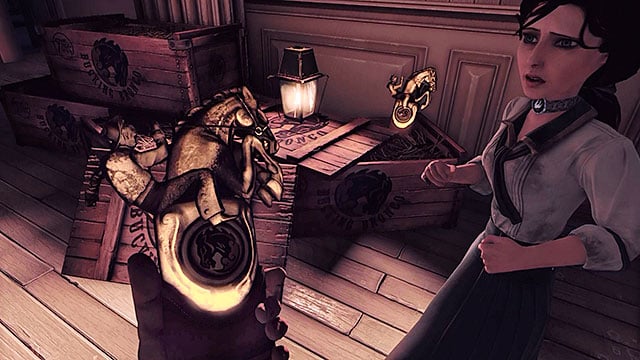 Soon after leaving the main hall of the pavilion you will find two bottles of a new vigor - Bucking Bronco. Take one of the bottles and leave the pavilion after drinking it. 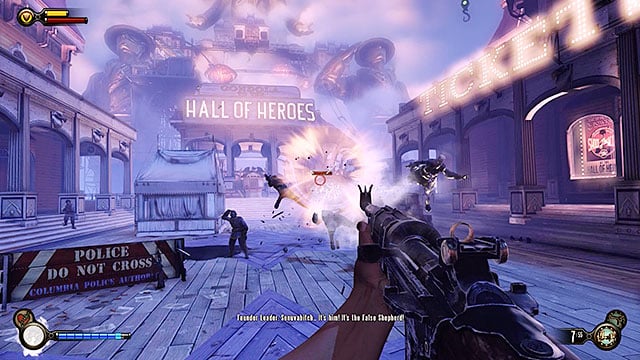 Once you're back outside you'll have to take part in a battle with a large group of policemen. You can test the newly acquired vigor, using this opportunity to neutralize two turrets guarding the entrance to the Hall of Heroes. Watch out for a new Raven, because this enemy will soon arrive at the battlefield. 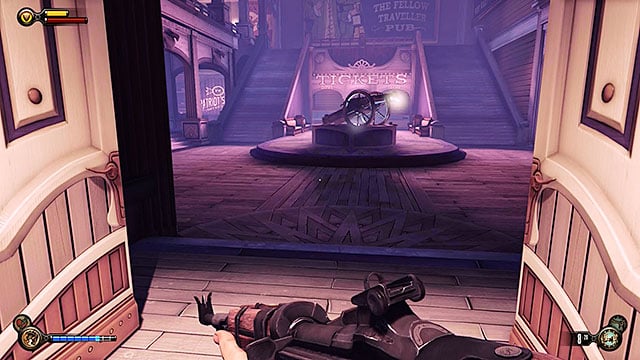 Keep fighting until you've won and then go to the ticket office. Use the front doors to get in and notice a cannon in the middle of the room. Examine the cannon's barrel to find a code book. Taking this object will unlock a new side mission - Use the cipher to crack the Vox code (it's described at the end of this chapter). 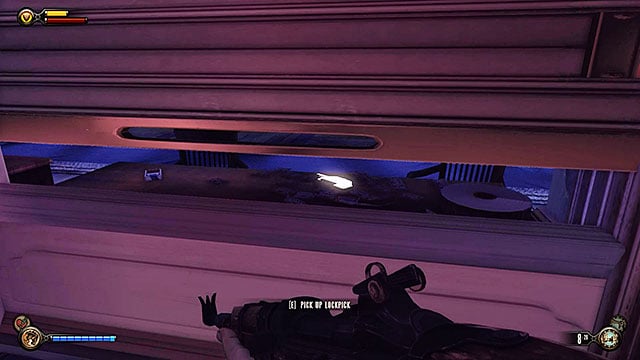 There's a ticket stand behind the cannon. Notice that the blind hasn't been properly closed and as a result you can collect a new lockpick. 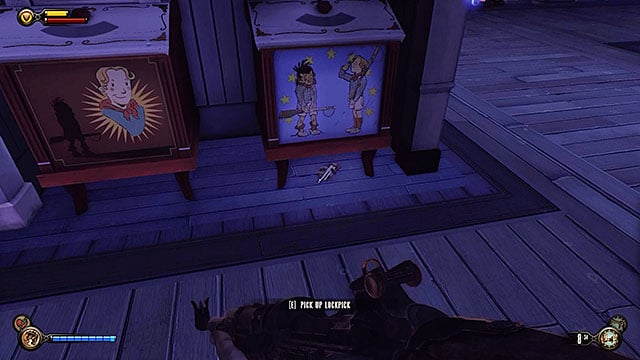 Proceed to the first floor of the building. Yet another lockpick can be found behind the Duke and Dimwit vending machine. You should also examine the area near the remaining vending machines to find additional money. 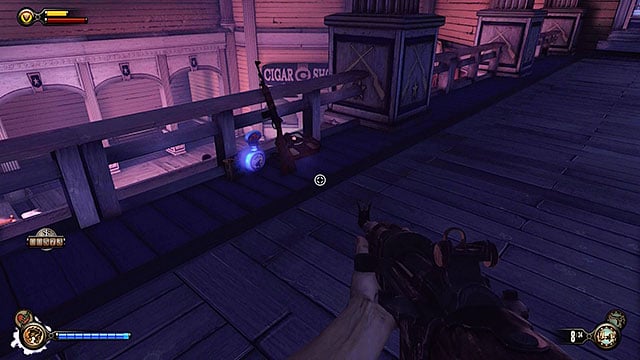 Check the area near the balustrade on the same floor, finding a rifle, salts and Voxophone #26: A True Soldier - Lance cpl. Vivian Monroe. 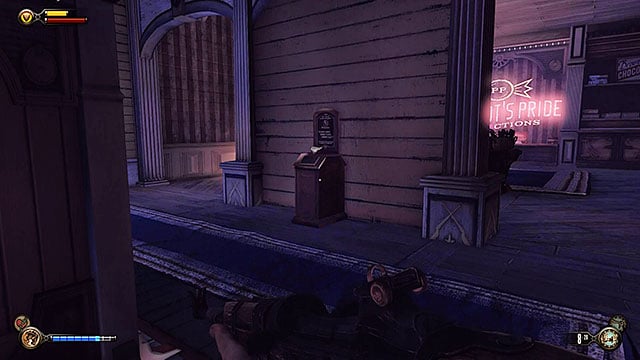 Go back to the ground floor. There's a Vantage Point #17: Kinetoscope - Who Are the Vox Populi? in the room to the left. 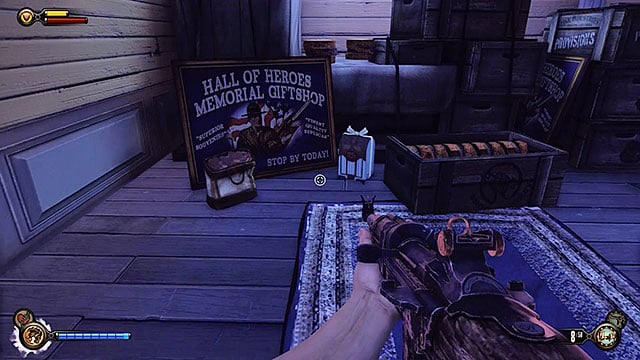 The room with the kinetoscope also contains a weapons upgrade station and a locked door. You can open this door assuming you still have 2 lockpicks with you. Wait for Elizabeth to break the lock and get to the ticket counter in order to collect a bag with silver coins and Gear #7 - Legs. 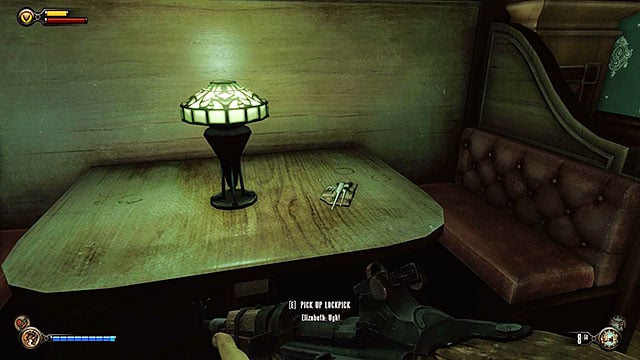 Once you've searched the ticket office proceed to the Fellow Traveller bar located on the opposite side of the square. Enter the bar and turn right, finding a lockpick on a table. 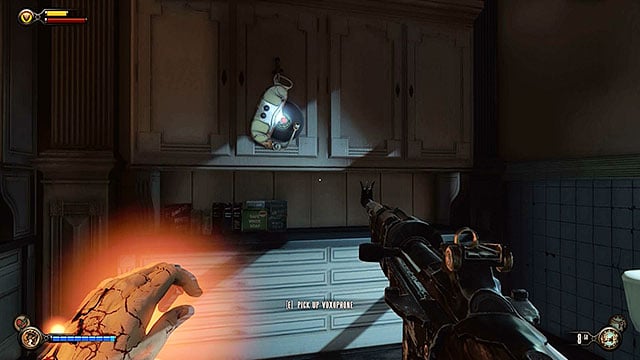 There are corpses in front of the kitchen door and on the bar and you can find a lot of ammunition. The kitchen also contains Voxophone #27: Vox Contraband Inventory - Sgt. Leander Manley. Make sure to explore the bathroom to find cipher needed to complete the side mission described at the end of this chapter. 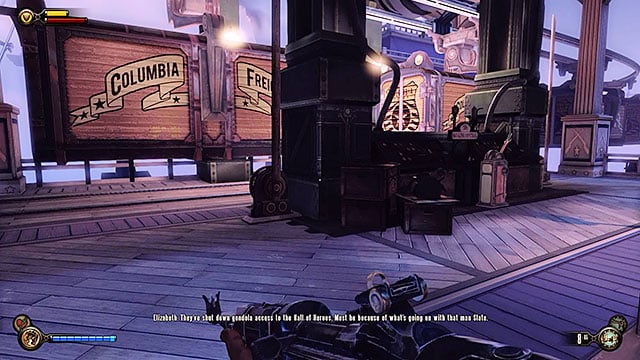 There's also one more thing for you to do at the station and that is to clear the way to sky-lines in order to use them to get to the Hall of Heroes. You can do that by pulling a lever found in the gondola's control panel. Wait for the cargo gondolas clear the way and attach yourself to the sky-line to get to the next station. 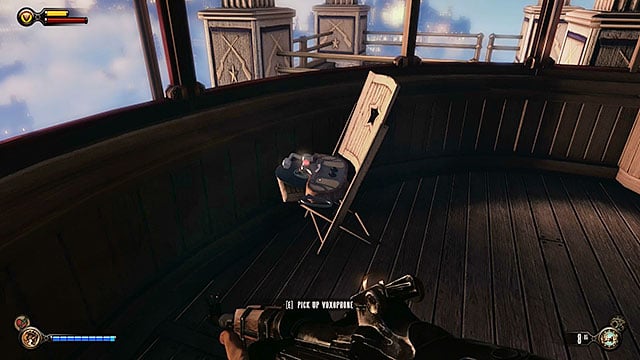 Once you've reached your destination use the stairs to descend to a lower platform and explore a nearby gondola. One of the cabins contains Voxophone #28: A Final Stand - Capt. Cornelius Slate. There's also a grenade launcher along with some ammunition next to this gondola. 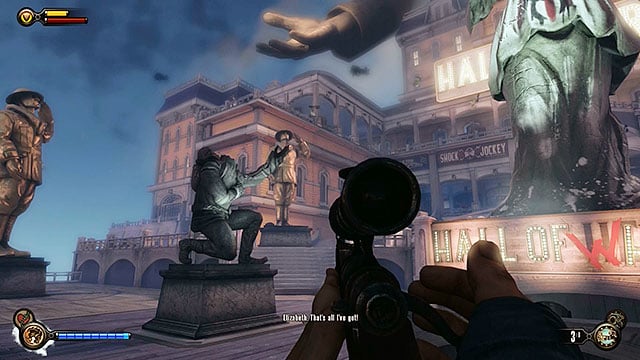 Approach the devastated statue found on the square in front of the Hall of Heroes. Elizabeth will give you a Sniper Rifle (it will replace the weapon you're currently holding in your hands) and point a sniper on a balcony to the left. Kill this sniper and deal with the remaining enemy units occupying the entrance. The sniper rifle will be very helpful in winning this battle. 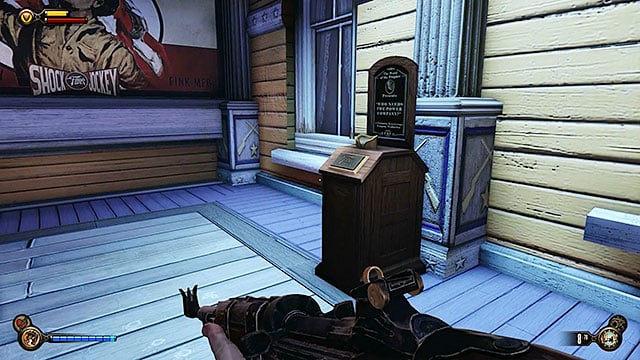