On this page of our guide to BioShock Infinite you will find the second part of a detailed walkthrough of Chapter 4 - Comstock Center Rooftops. The main character must, among other things, investigate the building of the Crow's Order and take part in more battles with enemies. In this chapter you will find a valuable key and the first item of your equipment. In the final part of this level there is a new mini-boss - the Crow. 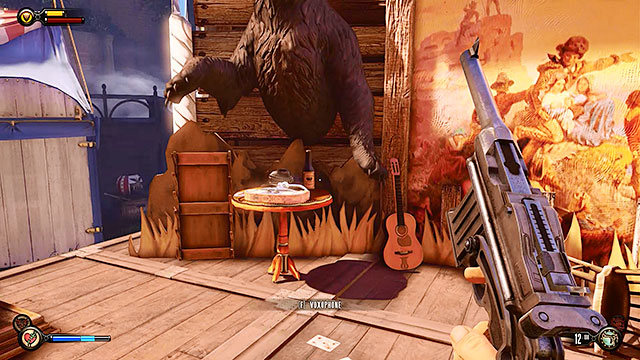 Another interesting item can be found on the stage, below the terrace. Approach a small table located below the stuffed bear and pick up Voxophone #8. 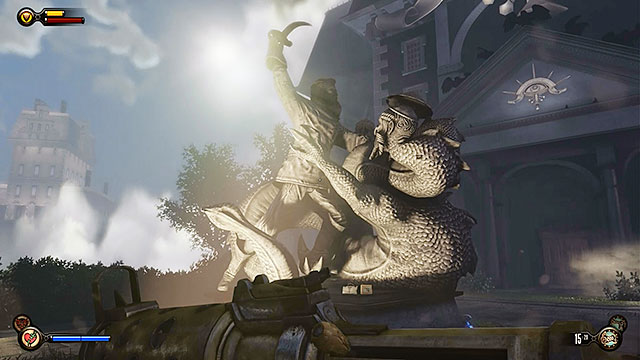 Proceed towards the gate leading to the Fraternal Order of the Raven. Examine a statue found on the other side of the gate, because you can find ammunition and a medkit here. Once you're done exploring enter the building of the Order. 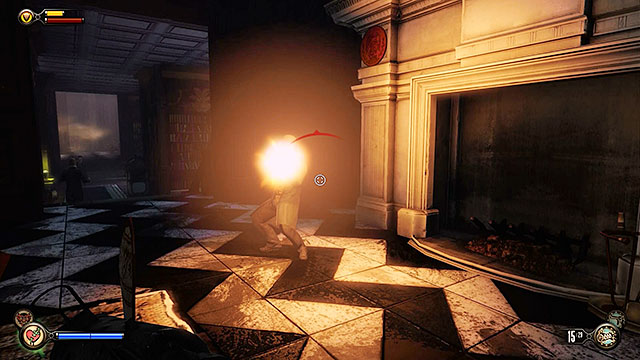 There are several enemies in the dining room and at the bar, but thankfully they're not equipped too well so killing them shouldn't cause you any problems. There's a dining room with a large table to the right of the entrance and you can find some money there. Notice a corridor behind the stairs in the main hall - it connects side rooms. Make sure to check these rooms to find a machine gun and some silver eagles. 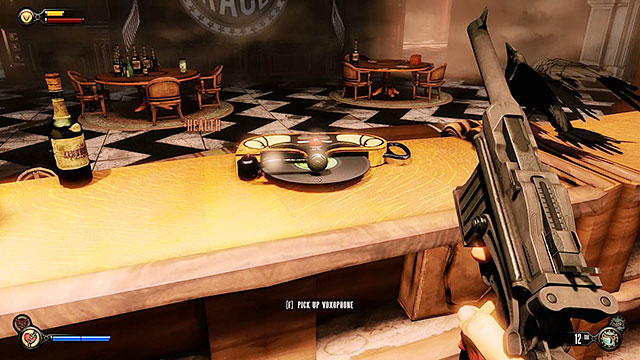 A bar is located to the left of the entrance. Inspect the area behind the counter to find a bag filled with money. There's also Voxophone #9 on the counter. Once you've explored the ground floor return to the main hall and use the stairs leading to the first floor. 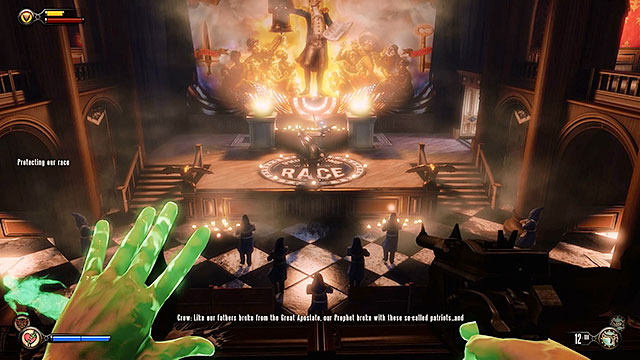 Eventually you'll end up on a balcony with a view of the altar where all the members of the Order are gathered, looking very much like Ku Klux Clan members. If you want to get rid of most of them at the same time you should throw a fiery trap from the balcony using Devil's Kiss vigor. Those who survive will use the stairs to get to you and the priest (Crow) will escape using a door located to the right of the altar.

Once you've successfully eliminated all members of the Order you should explore the balcony and then descend to the lower level. Check the area between benches and the altar to find Voxophone #10. The altar itself also holds two important items. The first item is an Infusion you may use to upgrade your armor, health or salt bar.

The second item is a key to the chest in the Lansdowne Residence required to complete the side task available in this chapter. 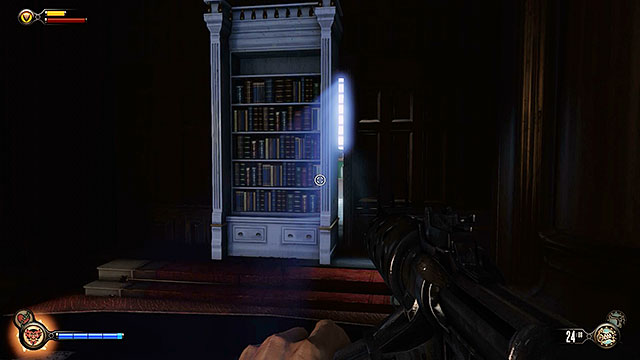 You must now proceed to the door Crow has used to escape. You'll end up in an office with an elevator. The office itself doesn't hold any valuable items, so you may use the elevator right away, allowing it to transport you to an upper floor. Resume the exploration to end up in a projection room with a round table in the middle. Examine the table to find some money and other resources and then check the rest of the room. Take a closer look at a book shelf located to the right of the table and you should notice light - this is a secret passageway which will lead you to a private prison of the Order. 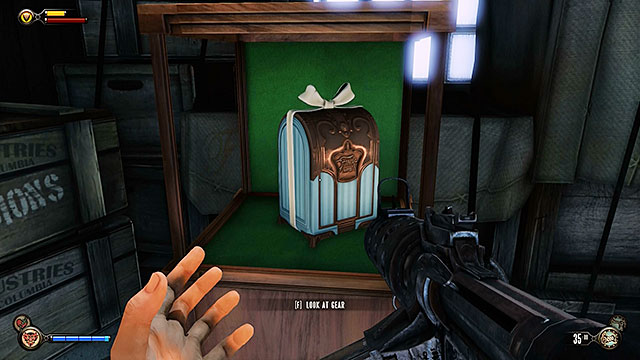 Examine the area near the cell and you'll uncover Gear #1 - Head. You don't have any gear on you at the moment and therefore the main character will automatically wear this object. You'll find more items intended for head protection later in the game and you'll be allowed to choose manually which of them you want to wear depending on the current situation. All elements of the main character's gear are hidden in predetermined areas, however collected objects are always randomized! You can find more about this game mechanic in the Gear chapter of the guide. 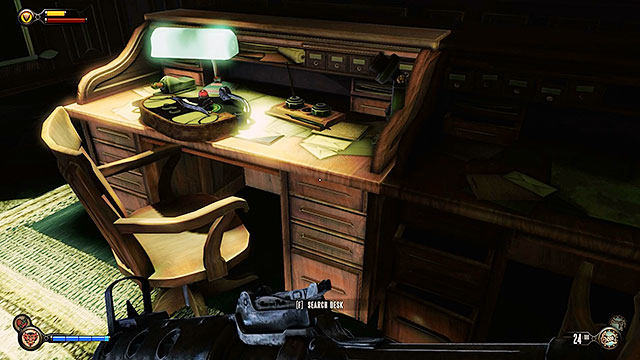 Proceed towards a small office, to the left of the table. There are several desks here and you should examine them to locate Voxophone #11. Once you're done resume following the Crow.

How to defeat the Crow mini-boss? 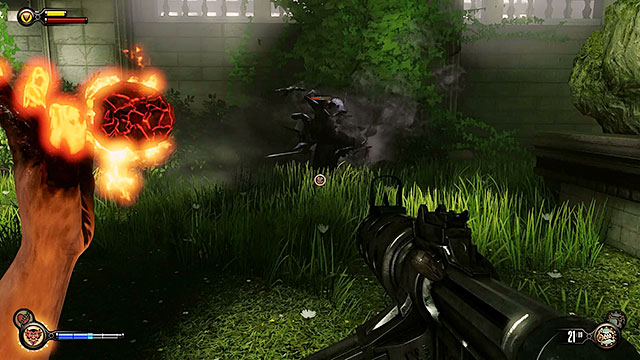 The stairs found in the projection room lead to the aviary and that's where you'll be forced to participate in a duel with the Crow. This opponent is similiar in concept to the Fireman so he's much stronger than typical enemies and he possesses unique abilities tied to vigors. The Crow moves around the battlefield by taking a shape of a flock of birds. When he's in this state he becomes immune to your attacks and much harder to spot, especially in darker areas. You're allowed to attack the Crow only when he's in his human form. A good method of injuring the Crow is to place fire traps and lure him there when he takes a form of a flock of birds, because when he'll return to his normal form he'll become vulnerable to conventional attacks. The Crow may seem like a very tough opponent, but that's just an illusion. Sacrificing one or two machine gun clips combined with aiming for his head should be enough to kill him. The outcome of this duel will be the same no matter how you've won, because the Crow will leave a new vigor for you as a gift - Murder of Crows. This vigor is perfect choice when you want to weaken or stun a group of enemies, however sometimes a single charge may even be enough to kill a single opponent.

As soon as you've collected the new vigor you'll have a chance to test it on a group of policemen, because they'll arrive here. Eliminate them and then explore the aviary to find salts and medkits. 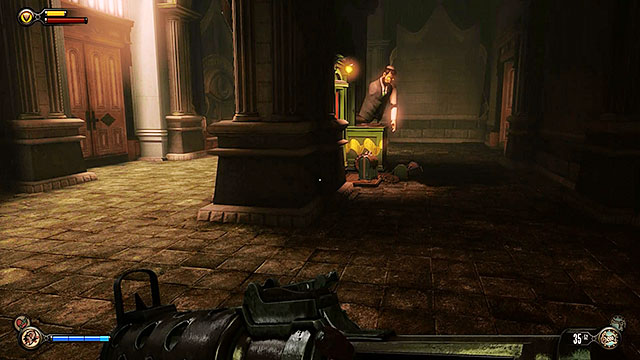 Leave the aviary and make a stop near the exit from the Order building. Find a broken jewish version of the Dolar Bill machine and pick up Gear #2 - Legs. 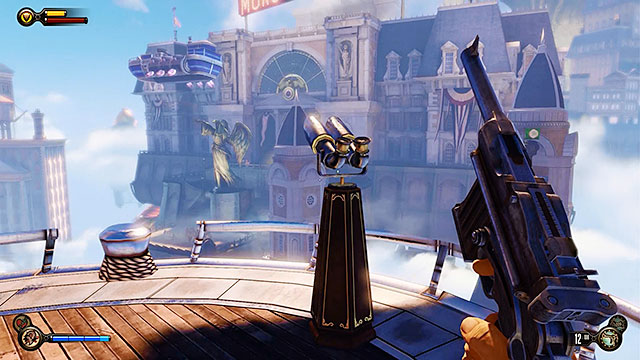 Use the back door to leave the Order of the Raven building. Explore the area and you'll notice a police barge. Get to the barge to uncover Vantage Point #9 - Telescope. 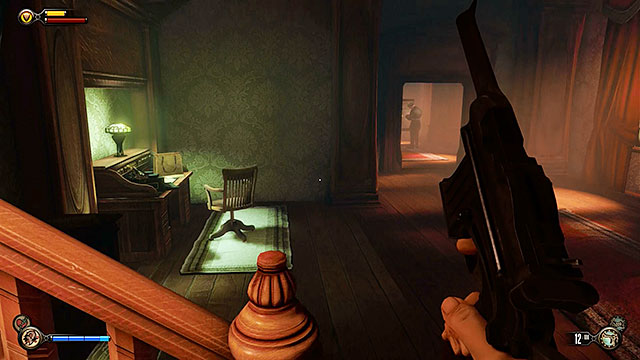 Check the area to your right to find interactive hooks. You may use them to get to the gondola station, however make a stop at the second hook and look to your right. Find a building located below the terrace. Drop to the terrace and enter the building to uncover that the police is trying to establish a portrait of Booker. Deal with the policemen and search the apartment. Take special interest in a desk found near the stairs, because you'll find a bag here filled with money. Once you're done exploring the apartment go back to the terrace and grab the nearest hook. 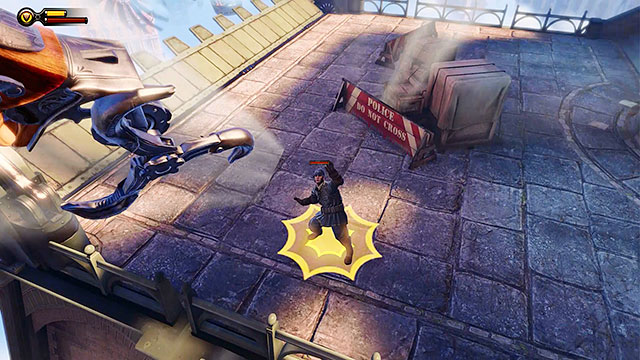 Continue moving towards the gondola station. Once you've reached the last hook you will be allowed to use the Sky-hook to perform an airborne execution on one of two policemen guarding access to the station. Deal with the remaining policeman and explore the area before moving on.