Those lucky people, whose life depends on your choice, are: Grace Holloway (Pauper's Drop), Stanley Poole (Dionysus Park) and Gilbert Alexander (Fontaine Futuristics). As for Mr Gilbert - if you're in a hurry, it's easy to simply miss the opportunity to kill him. After receiving the key allowing you to open the secret passage to Persephone, you have to wait for a moment by the control panel. Only afterwards the "old" Alexander will unveil a special button with which you will get rid of his current self.

One of the possible paths will allow you to choose your own faith. Curiously, you will be given the option at the very end, when you least expect it. If during the game you rescued and killed some Sisters as well - you will be able to choose if you want to sacrifice or save yourself (however it hardly can be called a proper existence). If you don't want to sacrifice yourself, you'll a variation of the bad ending. The dialogues are almost the same here, only the first part if different.

The mentioned difference is the faith of Sofia Lamb. The cutscene showing her last (or not) moments is a part of each ending and what will happen during it depends only on your choices regarding the three important characters.

The diagram below presents the connections between your choices and their consequences: 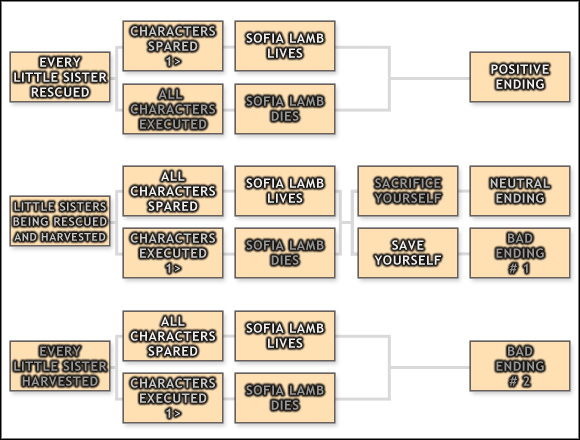