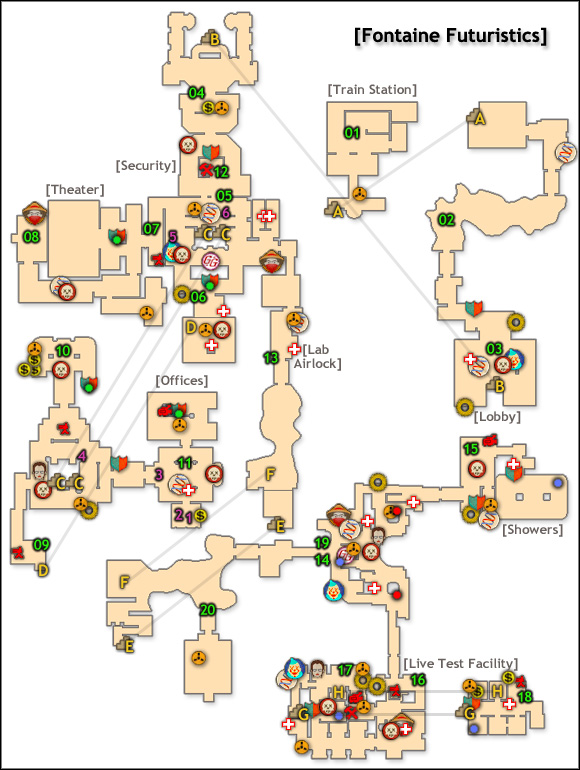 01 - You begin the level at the train station.

02 - Pick up the [Damage Research] tonic. Turn the valve and go through the water (remember about collecting the ADAM snails) to the other building.

03 - You'll have to fight a couple enemies, including Houdinis.

04 - Use the lever by the door. The flying weirdo will greet you with a speech. While patiently waiting for him to end, notice the hole near the ceiling, from where an Alpha series will soon appear. Fortunately, he's by far the weakest "big" enemy. There's a safe behind the counter and an Audio Diary in the cupboard, thanks to which you will open the next door.

05 - There's a couple of enemies waiting for you in the main hall. Take the Diary from the sofa to your right.

06 - First out of four transmitters (green points on the map) placed on but shutdown panels. Destroy it.

07 - Hack the turret and look through the hole in the wall.

08 - You'll have to play part in a stage show. Stand in the light and move round the scene a little. Afterwards you'll get attacked by three Houdinis and eventually by an Alpha series. Destroy another transmitter.

09 - Go upstairs and pick up the Audio Diary.

10 - You'll go past a turret. Inside the office there'll be an Alpha series. After taking care of him, turn the animal head on the wall, which will unveil a hidden locker. Take the Diary and open the 3 safes.

11 - In the room to the north, use a Dart to hack the control panel visible in the distance in order to cut off the power. Look out for the nearby camera and collect the Diary.

Open the room to the south by using Electro Bolt on the lock. Inside you will find the Unstable Teleportation Plasmid. Upon touching it, it will teleport to another location. Follow it (purple numbers on the map) and eventually it will teleport you to a room with the [Vending Expert 2] Tonic inside.

12 - After destroying 4 transmitters, you will get inside the security room. There's a Power to the People station inside, so make use of it. Push the lever and you'll get attacked by two Alpha series.

13 - Go through the previously locked door and pick up the Diary.

Cross the underwater section (at some point you'll have to jump into a hole) and go inside the next building.

14 - You have to flip two switches in order to restore the power. They're marked with red dots on the map. After you're done with that, go back upstairs and flip the last switch. Pick up two Diaries.

Your task is to collect 4 special flowers. They're marked with blue dots on the map. Once you pick up the first one, you'll get attacked by two Alphas.

15 - Take the Diary and flower. As you will try to exit, the room will get filled with mist and another Alpha will attack you.

16 - Look out for the turret hidden under the stairs. A little further you should find a Rumbler type Daddy, named Mark Meltzer. Take a Diary from his body.

Pick up the flower from nearby the monitors.

17 - Pick up the Audio Diary lying by the vent.

Hack the camera and shoot a dart at the lock visible through the window. Go to the room with the Power to the People station and pick up a Diary.

You can get another present for rescuing 12 girls, which you should have done around now. 160 dollars and 250 ADAM will be waiting for you by nearest Gatherer's Garden.

Jump through the hole in the floor to get into the cell complex below.

18 - Use the buttons to open all the doors. Look out for the turret (there's a buried safe next to it). Look for a hole in the wall, melt the ice blocking the door and enter the first room to the left. Inside you'll find a safe and a frozen Diary.

Take the flower from the nearby cell.

19 - Flip the switch and be ready for a big fight (some Splicers and around 3 Alphas). Flip the switch once again and take the key. Now you can decide to either kill Gil Alexander or let him be. Pull the lever if you want him dead. If for any reason you don't want to end his miserable life, just walk away.

20 - Use the key at the gas station and go into the hidden building. Pull the lever to drain the water, pick up a Diary and use the elevator which will take you to the next level.