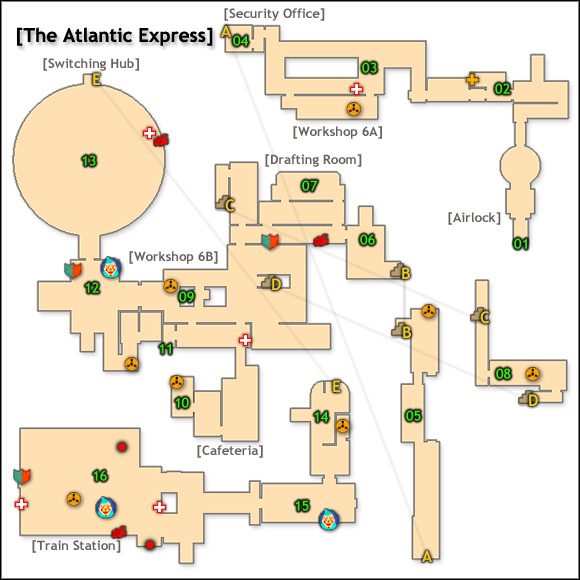 01 - Upon entering the room, you can quickly paralyse the running enemy. If you do it swiftly enough, he won't make it in time. Search the nearby lockers and move on.

02 - You will come across a new gadget - the [Hack Tool]. On the nearby wall there's a vending machine with darts to your new toy. Fill up and then shoot one of them through the broken window and into the control panel by the door and hack it. In the corridor you will find a deactivated Security Bot - hack it and you will gain an ally. 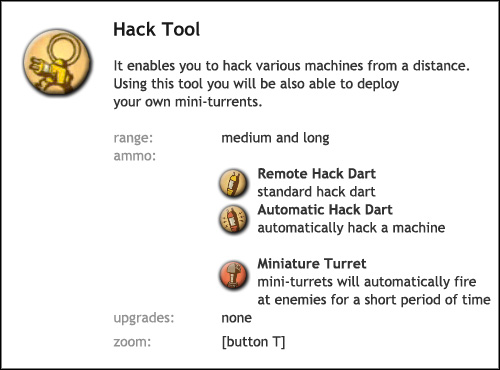 NOTICE: Hacking has been described in the proper chapter of the guide.

03 - You will encounter two Splicers by the train car. You will also find some fuel and rivets. Also don't forget about the Audio Diary.

04 - Pull the lever and watch the transmission. Afterwards you will get attacked by three enemies. Don't waste your ammo and focus on trying to avoid getting hit, because after a few seconds the floor beneath you will crumble.

05 - Get through the flooded corridor and search the bodies on your way. You will also have to squeeze through a small canal. At the end, behind a big fan, you will see an Audio Diary. In order to get it, you must first gain the Telekinesis Plasmid, which waits for you a little further.

06 - You will find some money, first aid kits and fuel in the room. Turn left and you should see a camera - use the Hacking Tool to make it your ally. Once a Security Bot arrives, you can treat it with a Hack Dart. Hacked, it will follow and protect you.

07 - Eleanor has left you a present in the form [Telekinesis] Plasmid. Press the button on the wall on the left and after a while you will get some more minor items.

08 - After going upstairs, you will have to face a group of enemies. Use the gas canisters and throw them using your newly gained Plasmid. The enemies appear gradually, so hide after your first attack and attack again after a while. Before going down, collect the Audio Diary.

09 - All the enemies should be long dead by now, so search the room. You will find a new Audio Diary.

AUDIO DIARY: [What Happened to the People?] - Mark Meltzer

10 - Lots of food left on the shelves. There's also an Audio Diary in the back. On your way back, you'll get attacked by a nasty couple. You can make use of the explosive canisters lying around.

11 - In order to move forward, you have to use Telekinesis to take out the pipe blocking the mechanism. Use the hole in the wall to do it. You will also find some items if you search the nearby toilets out of curiosity.

12 - If you hack the vending machine and stop the needle on the blue field, you will get a free, additional item. Go to the room where the blocked gears were and the Audio Diary on your way.

13 - You will encounter a Big Sister, but she won't attack you this time. Go right and hack the camera. You will be attacked by a group of enemies, so backup will be welcomed. Afterwards, use the elevator.

14 - A short cutscene will present a new rivet type, which set traps. This alternate ammo for the Rivet gun won't do you any harm, so you can cross the beams without any fear. Another advantage of this kind of ammo is that you can collect a previously set trap if it hasn't been activated. Use this fact and collect the rivets. You will find an Audio Diary in the small room.

AUDIO DIARY: [Improving on Suchong's Work] - Gil Alexander (in the drawer by the window)

15 - An unaware Splicer is facing the other direction. You can quickly get rid of him or turn his attention and draw him into a nearby trap.

16 - It's time for a bigger fight. There's a camera on the wall, which you can hack. Enemies will appear from the right and left side as well (bars on the wall). You can try and place traps here or retreat to the previous room and lure single enemies into a trap. Once the fight's over, pick up the Diary and pull the lever in the train car.