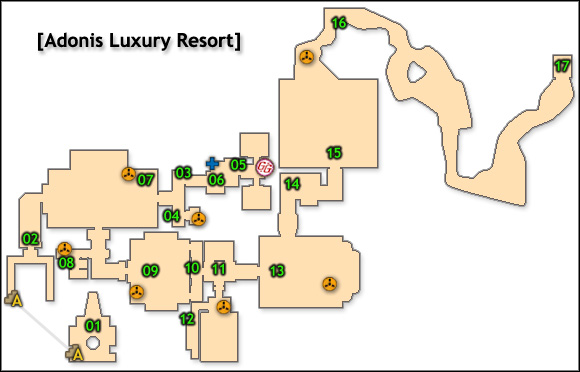 01 - You begin your adventure here. Take a look at your first weapon - the [Drill]. The stairs on the right will lead you upstairs. 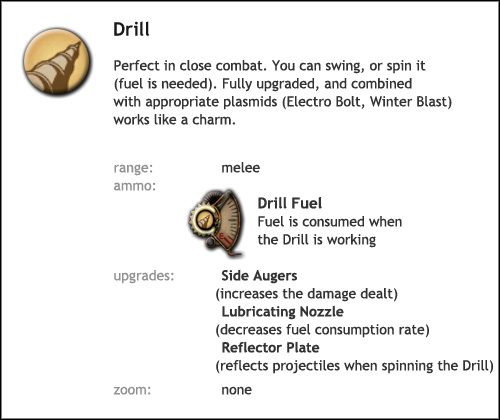 02 - Use your drill in order to get through the corridor and get rid of the naughty flora.

NOTICE: The weapon you're wielding has two attacks - by holding down the [left mouse button], your drill will spin, using up fuel. A simple push of the button will result in a simple blow, which isn't quite as effective as drilling into an enemy's guts.

Further into the corridor you will have to crouch [C], to pass under a fallen column.

After reaching the big room, you will get to admire the Big Sister's stunts. Have a closer look at the room, and on the right you will find some [drill fuel] and food, which will increase a small part of your health. On the left, there's your first Audio Diary [L].

03 - You will encounter an enemy. After a short cutscene, it will turn out that he's armed with a revolver. Rush and get rid of him, focusing naturally on his head.

NOTICE: If for any reasons you don't yet have the habit to search each body you come across, it's the right time to gain it. Your enemies often carry lots of precious stuff, from first aid kits and money to tonics.

04 - Notice the code on the door - 1540 and use it on the mechanics on the door to the right. Inside you will find an Audio Diary, fuel and some food.

05 - Take you first Plasmid - [Electro Bolt] - from the Gatherer's Garden. You will find some minor stuff in the side rooms, like cigarettes (smoking them will give you some EVE, in exchange for health).

06 - Use Electro Bolt on the panel on the left side of the door. Take a look around the room (you can find some fuel, among other items) and check the wall on the right. There's an EVE Hypos vending machine, so you can refill on them.

07 - Get rid of the two enemies (using Electro Bolt and then the Drill will make things easy). Afterwards use your Plasmid on the generator on the right to restore the power, which will open the previously locked door.

08 - On your way to the toilers you will come across an Audio Diary, fuel and some lockers which you can search. You can get into the second cabin by paying 5$. It's well worth it, as you will find some more money inside, among other stuff. After exiting the toilets you will get attacked by a woman wielding a pipe. You can wait for her to get into water and then use Electro Bolt to fry her.

09 - Two enemies standing in the water - a great opportunity to fry them. Search the room to find an Audio Diary.

AUDIO DIARY: [Return] - Brigid Tenenbaum (on the rock bench by the wall).

10 - You'll find the body of a Big Daddy and some [rivets] beside him. The door opposite is blocked by your new weapon - the [Rivet Gun]. 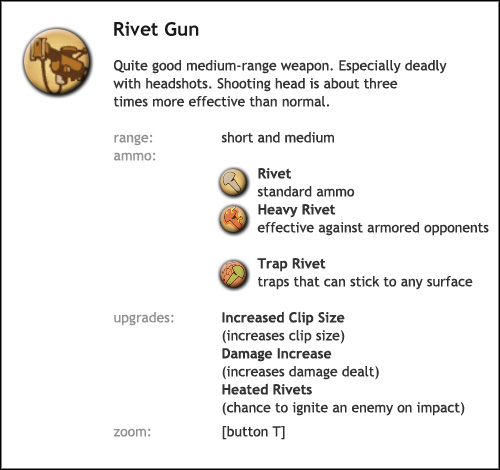 NOTICE: The Rivet Gun works best if you accurately aim [T] before firing into an enemy's head. Although remember, that zooming prevents you from using your plasmid (you have to return to the normal view first).

11 - A pair of foes and a great opportunity to test your new toy. Search the room to find some rivets.

12 - A new Audio Diary and deeper in the corridor (dead end) some bags which you can search. You can find water and cola, which both regenerate some of your EVE. On your way back you will come across an enemy searching a bag. Aim and shoot the exploding barrel.

AUDIO DIARY: [They Called It Rapture] - Mark Meltzer (on the floor, next to a bag with a doll).

13 - A short cutscene involving a Little Sister, after which you will get attacked by the bigger one. Constantly keep moving while fighting her. She's agile and moves often, so don't lose her. The Drill won't do much good here, so use the River Gun (aim at the head) together with Electro Bolt. You can make this fight a little easier, by taking advantage of the pools of water in which the Sister often stands. Once her health bar drops to around 30%, the fight will come to an end.

NOTICE: A more accurate description of how to deal with Big Sisters can be found in the proper chapter of the guide.

15 - A Big Sister will give you quite a show, which will end in an unexpected diving lesson. While underwater, you can't use your plasmids or weapons.

16 - Follow a pre-determined path. After a few steps you should find a bathyscaphe wreck with two bodies inside. You will find an Audio Diary by one of them.

AUDIO DIARY: [Escape From Rapture] - Sammy Fletcher (by one of the bodies found underwater).

During your further trip, you will get a chance to watch another Daddy defending his Little Sister. You'll also find some rivets and an EVE Hypo.

17 - Use the lever to pump the water out of the room and go to the next level.