On this page of the BioShock game guide, you will find the second part of the Arcadia stage walkthrough. Later when exploring Arcadia, you will learn about the need to "heal" the vegetation from the garden. There is also one of the best weapons in the game-the Chemical Thrower (can shoot napalm and electric gel).

14-You are inside the waterfall Grotto. There's a recording here. Look around and go down the stairs.

15-it is quite hot here: there are several turrets in this area and several Splicers as well.

Recording: "heroes and criminals" - Diane McClintock (to get to it, you must use the Electro Bolt on the locked door)

16-when you return to the top, go through the door leading to Arcadia Glens

17 - there, you will find only some ammunition. In the Northern wall, there is a hidden door that leads you to a room with a safe.

18-go to Rolling Hills. On the right, there is the temple of Houdinis, where you can enter and kill another representative of these "druids". When you are ready, hurry to the stairs marked with the letter A.

19-You are in the Lower Rolling Hills. As you approach the bathysphere station to the North, Ryan will release gas that will kill vegetation all over Arcadia. This will not allow you to leave this level, as mechanisms will be launched to prevent the loss of oxygen in the city.

20 - this is a small Houdini temple. Here you will find one recording and several small gadgets(including a chlorophyll solution - one of the rare items used to work with U-Invent stations).

21-Meanwhile, a second Little Sister should appear in the garden. Take care of her Big Daddy, and then keep going West to Langford's offices. As soon as she speaks to you from the monitors, you will have to go back to the grotto at the waterfall (point 14) and collect the Rosa Galica flower there. Before you go there, you will see three Splicers, beating some corpses. Get rid of them and take a tonic from the corpse - Security Evasion. Go to the grotto and take the roses from its center. Go back to Langford and use the pneumatic relay to send it to her. She will open her laboratory for you.

22-on the table you will find a tonic: hacking expert . There are also two recordings here.

Recording: "what won't they steal?" - Langford

23 - you will witness the doctor's death. Go to her office. Take the Chemical Thrower from the table . You'll find a recording on Langford's body. Move the illustrations on the wall and open the safe. The combination is 9457. Inside you will find another recording. From it, you will learn what to do next. 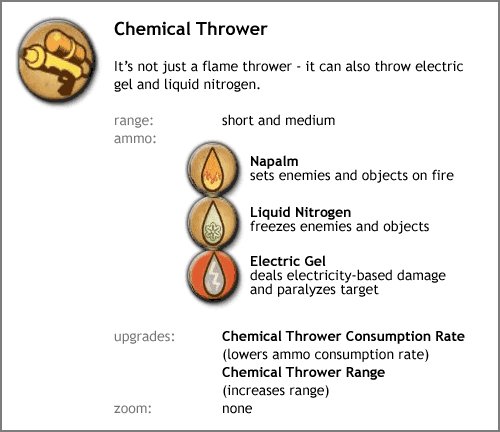 24-go to the Tree Farm. Along the way, you will find 2 recordings and the Power to the People station.

25-use the passageway to the Farmers' Market.

This site is not associated with and/or endorsed by the 2K Games or 2K Boston. All logos and images are copyrighted by their respective owners.