Here is our unofficial guide to an amazing game called BioShock. We have made every effort to make this guide one of the most comprehensive sources of information about this production in the world. This guide is divided into several large parts. On its initial pages, you can find the Bioshock game guide. In our guide you will find a few starting tips and the description of the main game mechanics-choosing the difficulty level, hacking objects, photographing enemies, defeating Big Daddies and catching little Sisters, as well as crafting.

The FAQ section of our guide contains, among others, answers to questions about how long does it take to complete BioShock and what are the best tonics and plasmids. Also important is the trophy guide with detailed descriptions of all available achievements.

Another large chapter of the tutorial is entirely devoted to the topics of equipment and the use of plasmids and tonics. You can find out what weapons are available in the game, how to upgrade them, which tonics can be found, and which plasmids a controlled character can use.

The biggest Chapter of our tutorial is a step-by-step walkthrough. Thanks to high-quality maps of all locations, it is also a World Atlas. On the maps, we marked all the important places, pathways between the main areas, and unique collectibles (for example various kinds of vending machines). In our walkthrough guide, you will learn how to complete consecutive levels, how to solve puzzles, how to deal with opponents and how to defeat the final boss.

Whether you are a beginner or an experienced player, our tutorial will help you obtain absolutely everything you can find in this wonderful production. Have fun!

A few quick tips before you start the game

For more tips, see the getting started chapter.

In the step-by-step walkthrough section of our guide, you will find a complete overview of all stages of the game. Here is a list of available levels in BioShock 1:

Plasmids and tonics in BioShock 1

Plasmids and tonics are active and passive powers / abilities that allow a controlled character to become stronger and acquire completely new abilities. We have described them in detail on several pages of the guide:

In addition to being dependent on plasmids, the main character can also use a wrench and classic firearms. We have described the available weapon models on two different pages of our guide:

How to beat a Big Daddy? 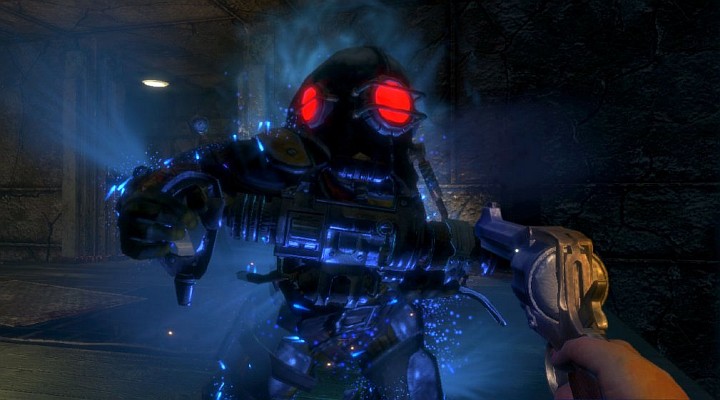 Big Daddies - big opponents in diving suits, which represent the biggest problem among all the varieties of enemies that you encounter in the game. In the Sisters and Daddies chapter, we described in detail the rules of confrontation with them. Here's a reminder of some of the most important things about how to beat the Daddy:

Does BioShock have a hard platinum trophy?

No, unlocking the platinum trophy in the first part of BioShock is not a big problem. A very big relief is that you can " cheat" the game and pass it at any lower level of difficulty. The game still has an exploit that allows you to change the difficulty setting just before the final cutscene appears. This method is described in detail in our trophy guide-go to the description of the achievement I Choose the Impossible.

To unlock the platinum trophy, you must, among others, complete research on all opponents and find all audio recordings (collectibles / secrets). This is worth remembering from the beginning of the game.

How long does it take to complete BioShock?

The main storyline should last for 11-12 hours. This time can increase significantly if you decide to set a high level of difficulty and explore all locations in 100% (for example in order to get to all the collectibles). Full information about the expected length can be found on the page How long does it take to complete BioShock? in the FAQ section of our guide.

Why doesn't the game allow me to save my progress on the PS4? 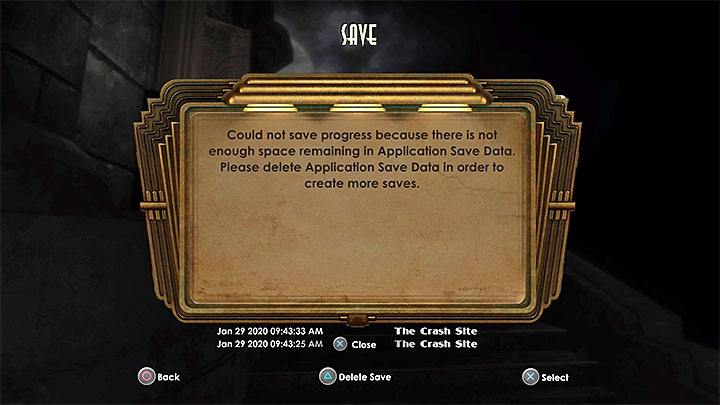 This is unfortunately a fairly common problem in the version released for the PlayStation 4 - you must delete previous manual saves to go below the allowed limit for the total size of saves.

An additional complication is that the BioShock 1 and BioShock 2 games share the save slot. You may be forced to run the second game to delete its saves. This question was discussed in great detail on a separate page Why can't I save the game on PS4?.

Can I only install Bioshock 1 on PS4? 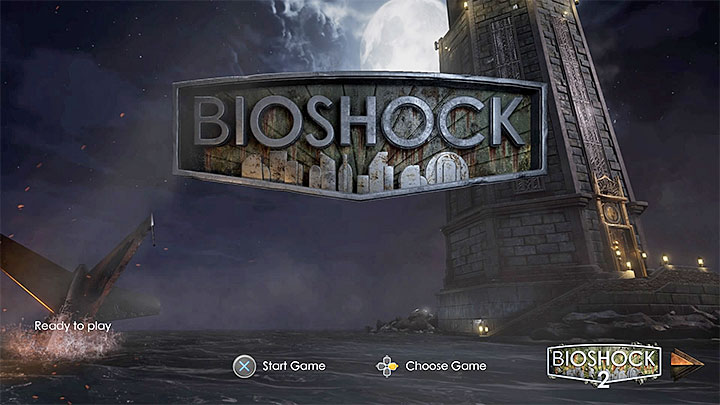 No, BioShock 1 and BioShock 2 games are installed together. Only BioShock Infinite is a separately installed game. After starting the game, a menu will appear from which you can choose whether you want to play the first or second part of the series.

Can you finish the game without killing anyone?

No, BioShock 1 is not a type of game that allows avoiding all potential collisions. You have to kill a lot of enemies during the course of the campaign, especially genophages and bosses.

You don't have to deal with Daddies - you can ignore them. This, however, will prevent you from collecting the substance called ADAM from Little Sisters accompanying Daddies. You also don't need to destroy security systems (cameras, turrets, bots) - you can sneak past them or hack them.

Does the Bioshock 1 remaster contain all the original content?

Yes, this is a complete product. You can complete the entire main campaign and enter Challenge Rooms. The remaster, which is part of BioShock: The Collection, also includes additional content-an interactive Museum and the ability to play Director's Commentary.

No, you don't need a PlayStation Plus subscription at all. The first part of Bioshock did not have and still does not have a multiplayer mode.

Can I go back to previously visited locations?

Yes, but with a few exceptions. The bathysphere is used for traveling to various Rapture regions. It can help you, for example, go back to previously missed or ignored Daddies.

There is no Chapter selection in the game, and you also can't continue exploring Rapture after the main story ends! We recommend that you create a separate record before proceeding with the final stages of the campaign.

Are there any collectibles in the game?

Yes, the most important ones are audio recordings. After you have picked up each log, you can listen to the message stored on it. Throughout the game, there are up to 122 audio logs to find. Collecting them unlocks the silver Historian trophy. All the secrets, of course, were included in our walkthrough description.

Is there a Photo mode in the game?

Yes and no. In Bioshock, it is not possible to launch a special photo mode in which you can play with sharpness or apply additional filters. The hero acquires a camera during the game. It is of great importance in the game, as it is used for photographing opponents and conducting research about them in this way. Various awards are unlocked for advancing to new levels of research.

How to use our step-by-step guide; color markings in the tutorial 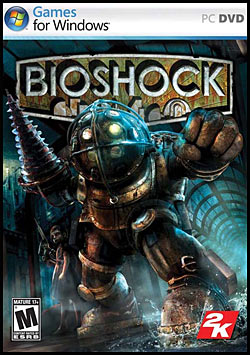 BioShock is a combination of an action game, first person shooter, cRPG, and survival horror created by Irrational Games (developers of System Shock 2, SWAT 4, and other titles).

BioShock for PC, X360 and etc. is a first-person shooter developed by 2K Boston and 2K Australia (previously known as Irrational Games), the creators of Freedom Force, SWAT 4 and Tribes: Vengeance. Moreover, some of the developers employees previously worked on the cult System Shock 2. BioShock should be considered a spiritual successor of the latter of the above-mentioned titles, as it combines typical shooter game elements (predominant) with those of an RPG. Furthermore, the game's dense and overwhelming atmosphere reminds one of a survival horror, where the player constantly experiences psychedelic moods.

The story of BioShock starts in 1960, as its protagonist, Jack - passenger of a crashed plane, ends up in the ocean and begins to drown. Having assumed control of him, the player has to keep him alive and guide towards a light shining in the distance. After a while, it turns out that the source of the mysterious glow was the lighthouse of an underwater city, Rapture. This is where the entire adventure takes place.

The underwater metropolis is a huge complex which was built in 1946 by an American businessman, Andrew Ryan, in order to create a shelter for the most prominent representatives of mankind, such as scientists, artist and so on. A few years after the end of World War II, the project was abandoned and the city left to its fate. However, in the meantime, two researchers discovered a previously unknown species of sea slugs living at the bottom of the ocean. These animals had the ability to produce ADAM, a substance that could change human tissue into stem cells, allowing people to develop and enhance special abilities if used properly, or even offer them immortality. The unusual characteristics of this chemical became the subject of numerous controversies. At some point, the two factions that distributed the substance started to fight one another, leading to a civil war in Rapture. During the conflict, it was discovered that ADAM can also cause mutations and addictions. As a result of the fighting, the underwater metropolis was ruined, and those who survived lost the remains of their humanity; their existence was reduced to searching for leftovers of ADAM.

Jack, controlled by the player, has to secure his footing in the dystopian world and progressively uncover the rules that govern his new home, where danger lurks around every corner. To to be able to face them effectively, we have to rely on ADAM. Acquiring it is no easy task, though, as the only creatures that possess the substance are little unimposing girls, the so-called Little Sisters. In order to defeat them, first we have to face their powerfully armed bodyguards, the Big Daddies. To make things worse, the city is full of other monsters, and what's left of the public order is maintained by ruthless robots. Luckily, enemies can be dealt with by the use of lethal force or, alternatively, more sophisticated means, for example: hacking various devices (in the form of a simple mini-game).

The players can also upgrade their weapons (pistols, shotguns, rocket launchers among others) by attaching scopes and larger magazines or using more effective ammunition. Moreover, we can enhance the mental and physical abilities of the protagonist with power-ups called the Plasmids. These genetic code modifications allow us to act more effectively in the game world, where each choice has a real impact on the way the story develops. Another thing worthy of mention is the fact that the plot is non-linear. During our missions, we will make use of numerous gadgets, as well; these include night vision goggles or a device that shows us the weak points of our enemies.

BioShock for PC, X360, Xone and Playstation 4. is powered by Unreal Engine 2.5. The unusual atmosphere of the game is intensified further by the unique soundtrack composed by Garry Schyman, the composer of musical score for Destroy All Humans!. It must be remembered that the PC, X360 and etc. version of BioShock requires an Internet connection to be activated. What is more, the game uses the Games for Windows Live service, thanks to which we can unlock a number of interesting achievements, designed in the likeness of those from Xbox Live.

Bioshock Game Guide is also available in our Mobile App This site is not associated with and/or endorsed by the 2K Games or 2K Boston. All logos and images are copyrighted by their respective owners.