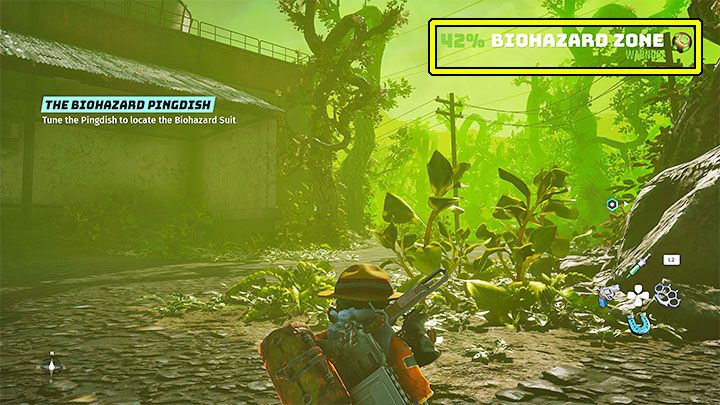 As you traverse the Biomutant game world, you may encounter five different varieties of contaminated zones. When you enter one of these zones, information about the danger will be displayed in the upper right-hand corner of the screen along with the percentage of contamination. If you do not react quickly enough to this message, your character can easily die.

Until you acquire a suit that corresponds to a particular type of zone contamination, you have two main options: 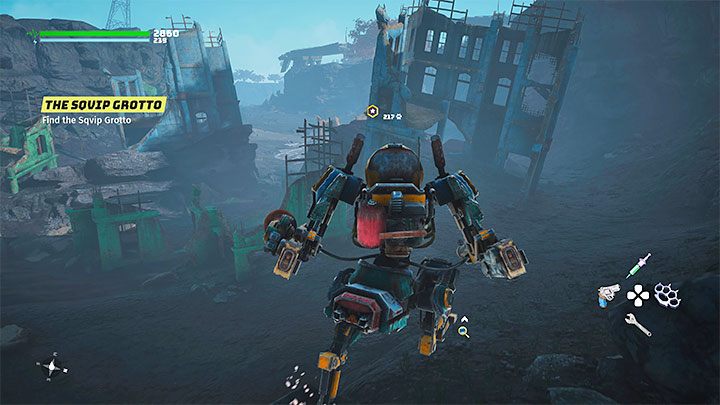 In the vast wilderness, you also get a third option - Mekton's mech's cabin will protect you from the harsh environment. You will be able to use it to explore contaminated areas, but make sure to only leave the mech for short periods of time, e.g. to collect loot from nearby chests. Unfortunately, the game only allows you to use the mech in a relatively small area of the world map. You won't be able to explore most contaminated areas this way. 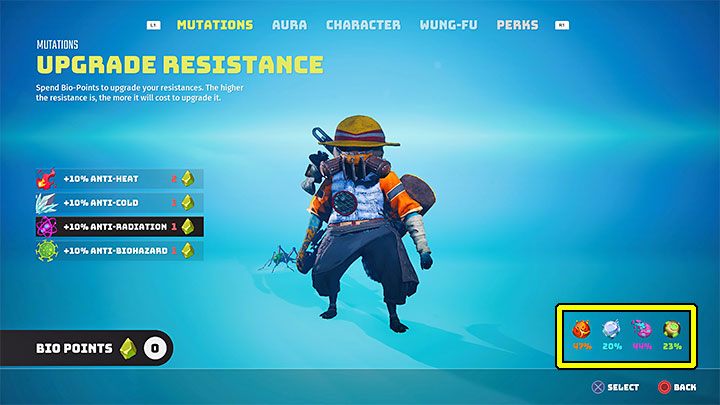 Remember that the rate at which the contamination percentage increases is affected by the hero's Resistance to the element. You can view your current amount of resistance in the pause menu (in bottom right corner of the screen). The meanings of the symbols and methods to increase your resistance are described in detail on the Status and Elemental Resistances page.

Equipping the suit will simply increase the corresponding resistance to 100%, making the hero fully immune to it. You won't have to worry about the contamination bar any longer. 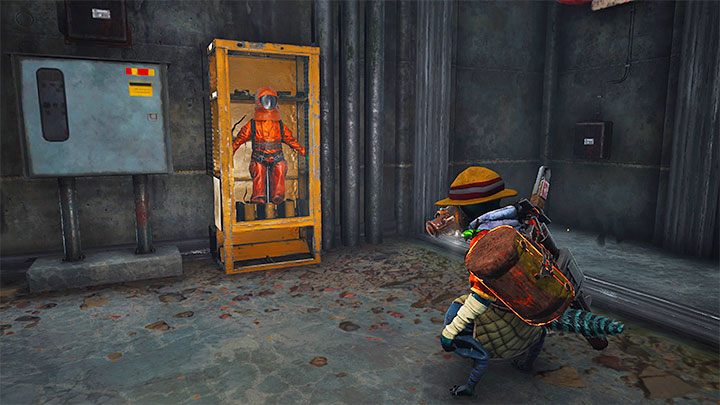 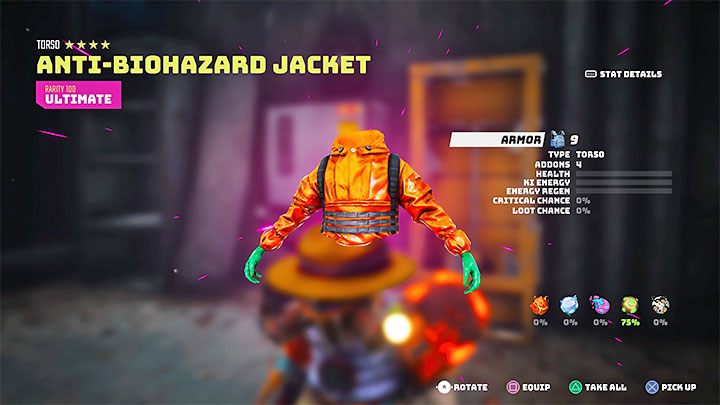 Acquiring the appropriate suit is the most universal method of dealing with contaminated areas once and for all. You'll need to obtain a variety of suits corresponding to different types of environmental hazards - we've summarized the main types in the following subsections.

Each suit can be earned during a separate side quest from your character's journal. You must complete these quests in order to locate the areas containing the suits. 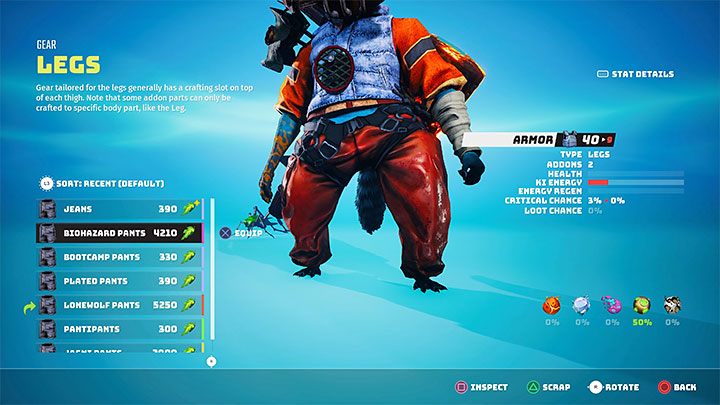 The character won't automatically equip the suit you found. You have to equip it yourself through the inventory screen - select the headgear, pants and chest slots (the Oxygen Suit will additionally require the backpack slot). In each slot, equip a part of the suit. 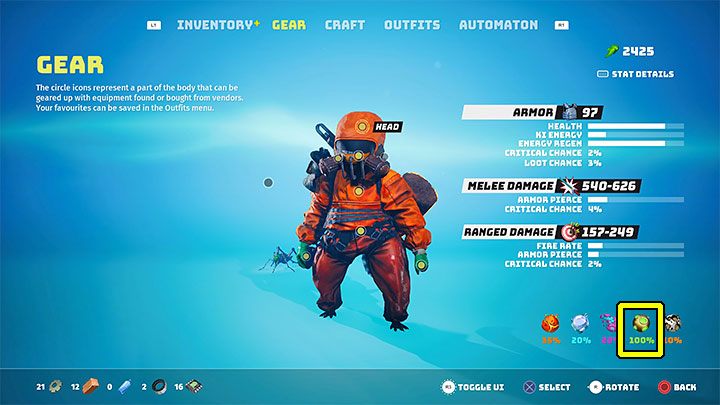 If you have equipped the suit correctly, a notification in the equipment window should appear announcing that the resistance to the corresponding element has increased to 100%. 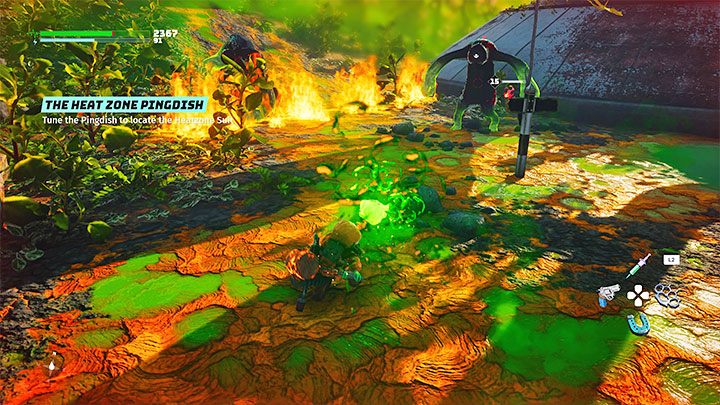 Additional Note - The main purpose of the suit is to protect against contaminated environments, but this means that the suit's other stats might be low - most notably the armor value. You must keep this in mind if you encounter any monsters in the contaminated zone. You can try to safely attack them from a distance, run away from them and focus on finding loot, or drag enemies away from the contaminated zone so you can swap your current suit with your main one. 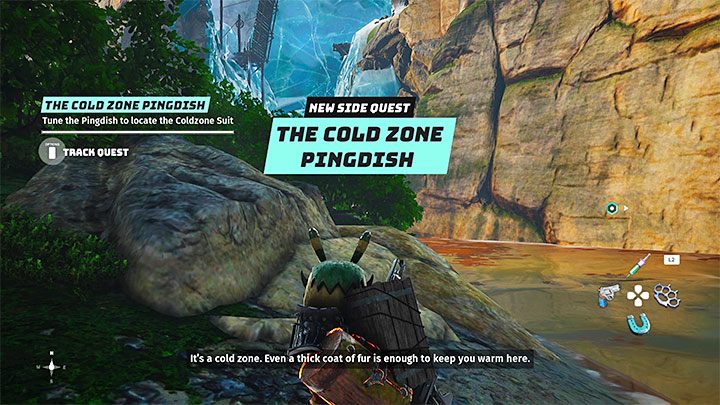 You will first learn about the option to obtain a suit shortly after entering (in person, not in a machine or on a mount) a location with a particular contamination or environmental hazard. The corresponding side quest will be added to your journal. The list of suits and their quests can be found below. 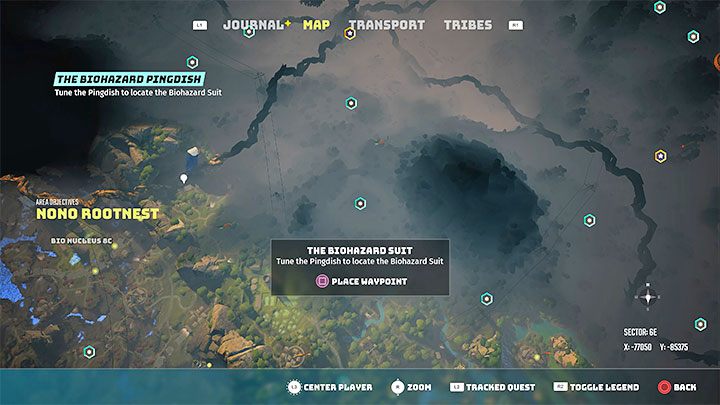 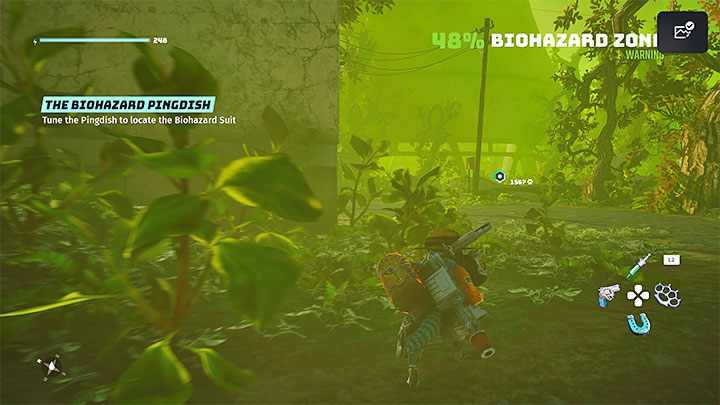 Locate the side quest marker for this suit on the world map. The Biohazard Suit will allow you to explore contaminated green zones. 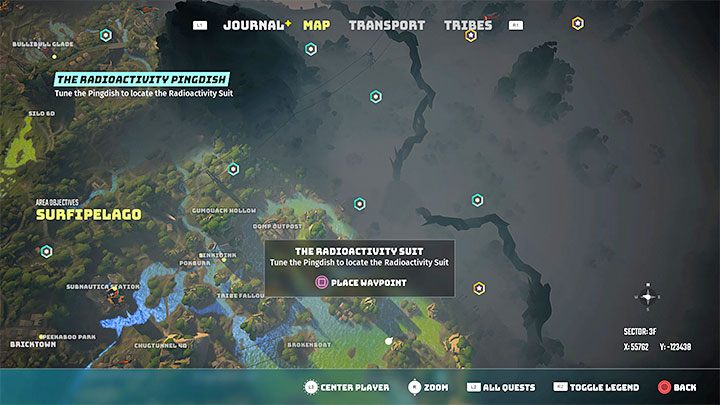 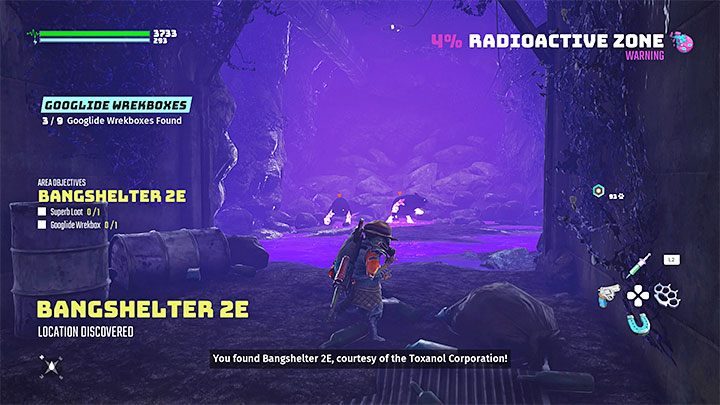 Locate the side quest marker for this suit on the world map. The Radioactivity Suit will allow you to explore purple zones with high radiation levels. 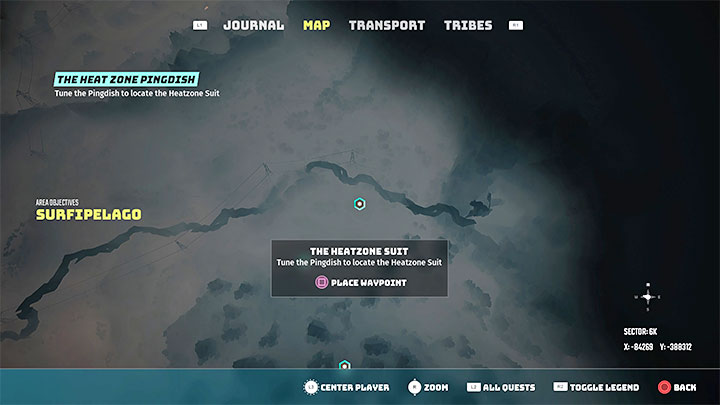 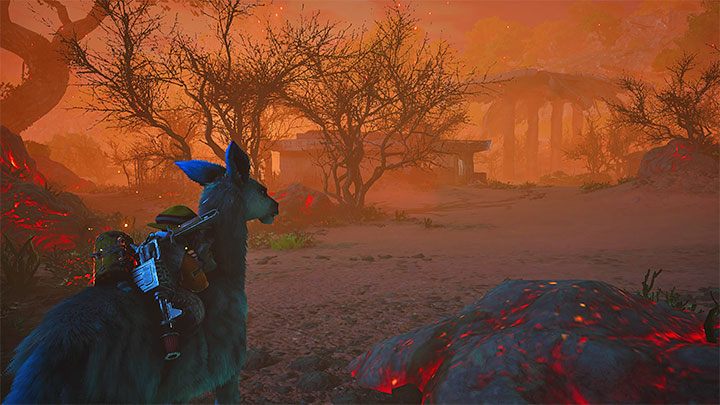 Locate the side quest marker for this suit on the world map. The Heatzone Suit will allow you to explore areas characterized by extremely high temperatures. 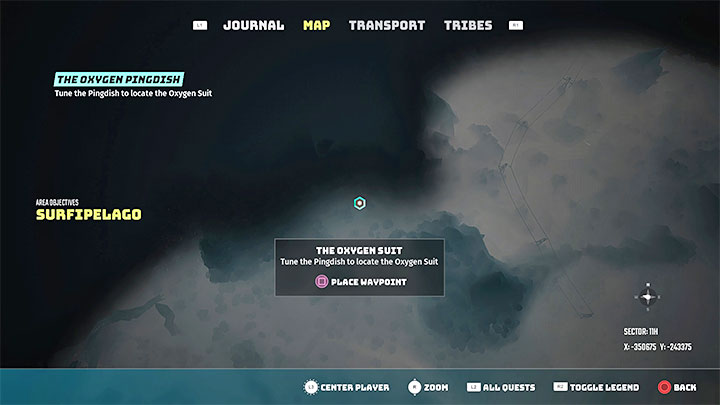 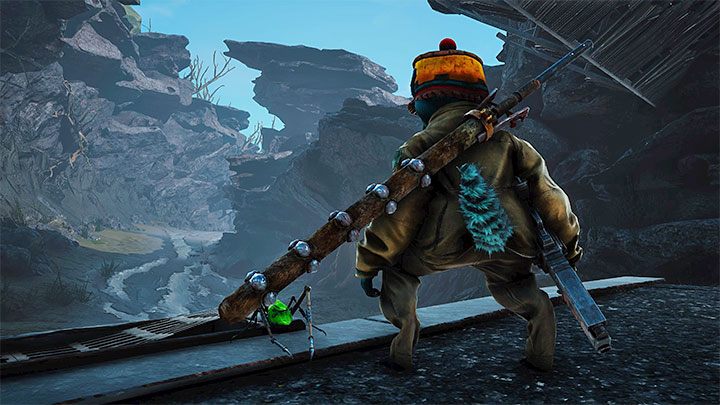 Locate the side quest marker for this suit on the world map. The Oxygen Suit will allow you to explore zones with limited access to oxygen. The western wilderness is the best example of such a zone, but remember that you can also use Mekton's mech in the same area. 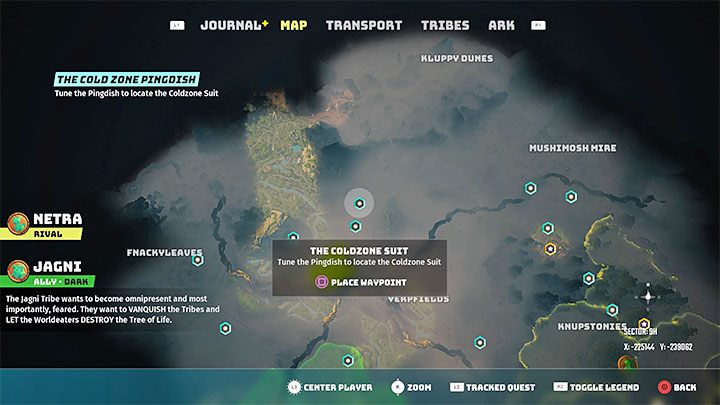 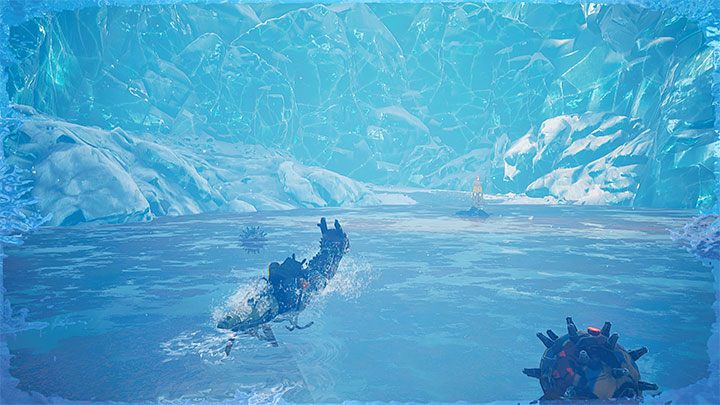 Locate the side quest marker for this suit on the world map. The Coldzone Suit will allow you to explore frigid zones characterized by extremely low temperatures.