This page of the Biomutant game guide describes mounts and machines (among others, mechs) available in the game and used to travel through the open world. You will learn how to unlock the first mount and the first machine, as well as what actions are available when using them. 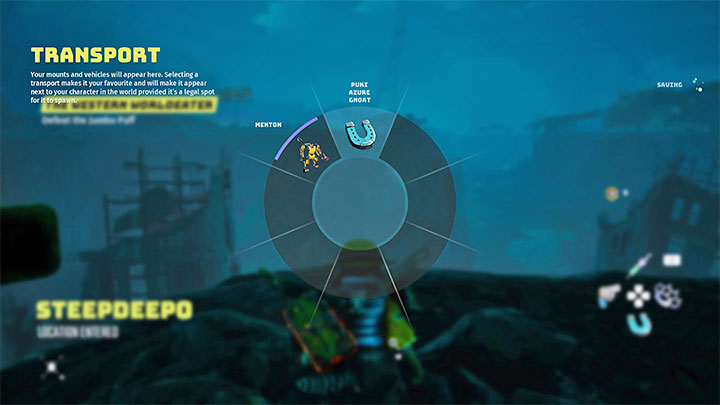 When you start playing Biomutant , you will initially have to travel around the large open world on your own, but this will not last until the very end of the adventure. In the later stages of the campaign you will be able to unlock mounts and various machines.

The mounts are primarily used as a means of transportation - they will be able to facilitate exploration of the area or enable safe passage through contaminated areas. The game allows you to use mounts during some battles and this can make the gameplay significantly easier.

Unlocked mounts and machines can be summoned as many times as needed via a drop-down menu that can be accessed by holding down the bottom direction button on the controller. The game may not allow you to summon a mount or a machine if you are in the wrong place (especially a mech may require you to be in the middle of nowhere).

Mounts and machines cannot be irretrievably lost. If you are defeated while riding them, it will be classified in the same way as the death of a character moving on their own. Once unlocked, your means of transportation will stay with you for the rest of the adventure. 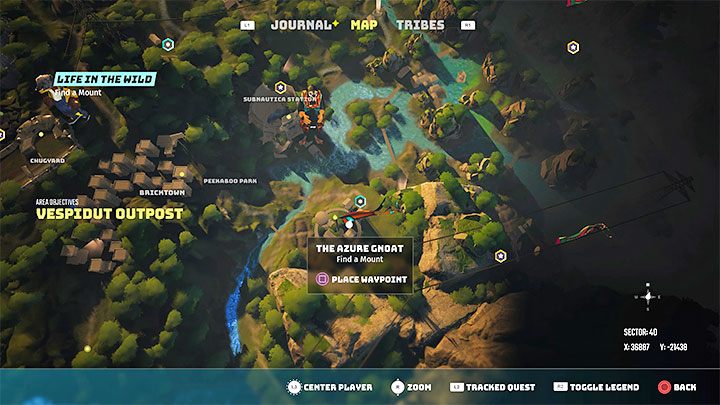 You can get your first mount relatively early in the game, specifically while participating in the initial tribal wars.

After taking over one of the enemy forts, a Life in the Wild side mission marker may appear in its surroundings. It concerns the taming of the first mount - The Azure Gnoat. 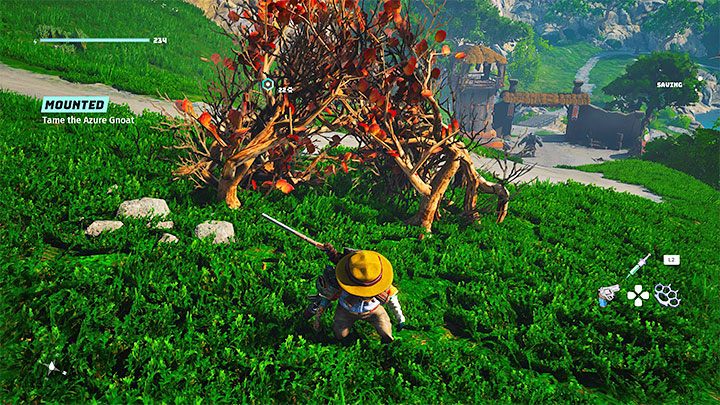 When you reach a designated place, you can find a mount, but the game won't let you ride it right away because you have to tame it first. To do this, you must reach the nearby Pip Plant and slip under it to get the Pip Seed. 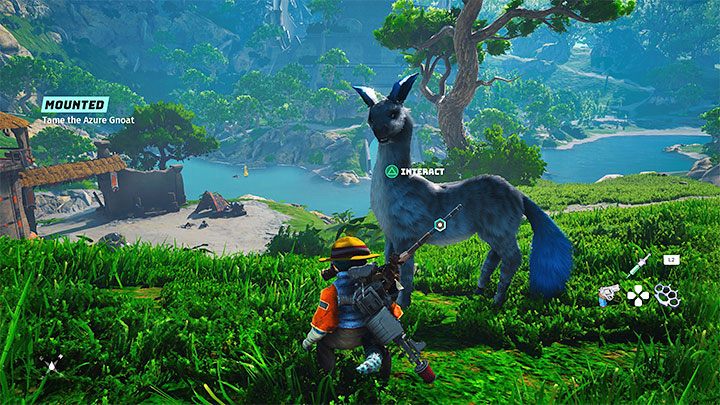 With the seed you can approach the mount. Interacting with it will lead to taming it and to "assigning" the animal to the protagonist. 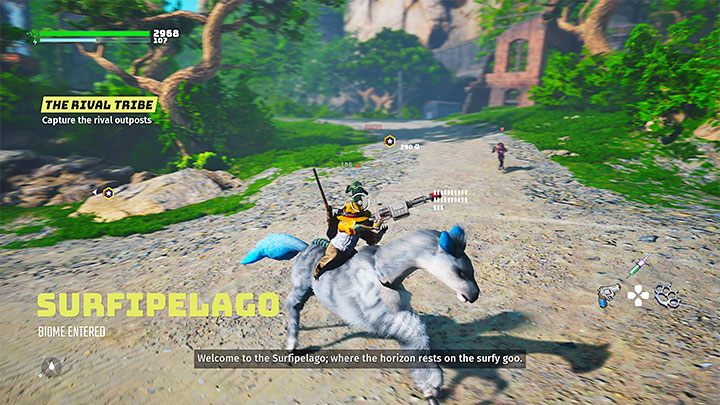 Mounts can help you mainly to explore the world faster, but you can also use ranged weapons while on the mount's back. Of course, try to stay on the move while firing in order not to become an easy target for your opponents.

Mount swapping - is it possible? 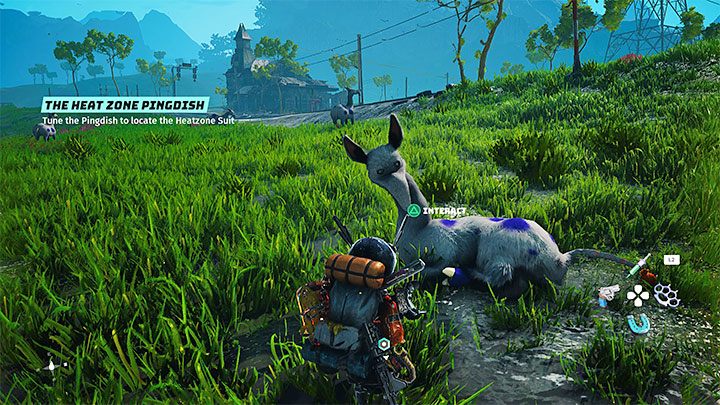 Yes, the game allows you to swap your first mount for another one. As you travel through the game world, you may come across creatures that differ in appearance or coloration from your current mount. 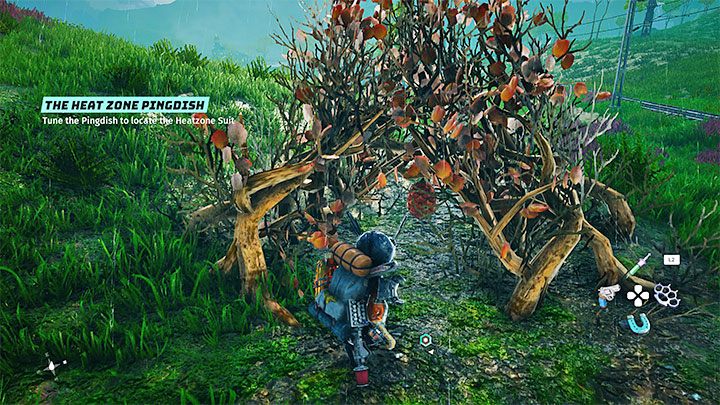 Unfortunately, one cannot immediately "swap" the mount, as the newly found animal also needs to be tamed. You have to look around for a bush, get a seed, and return with it to where the neutral creatures are. 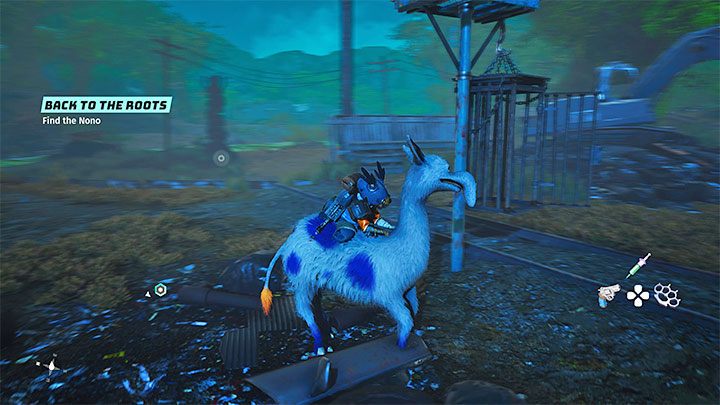 A tamed animal will become a new mount. This means that it can be summoned from the drop-down menu. The mounts available in the game do not differ in stats and do not have any unique characteristics. So the choice is simply about what the animal looks like. 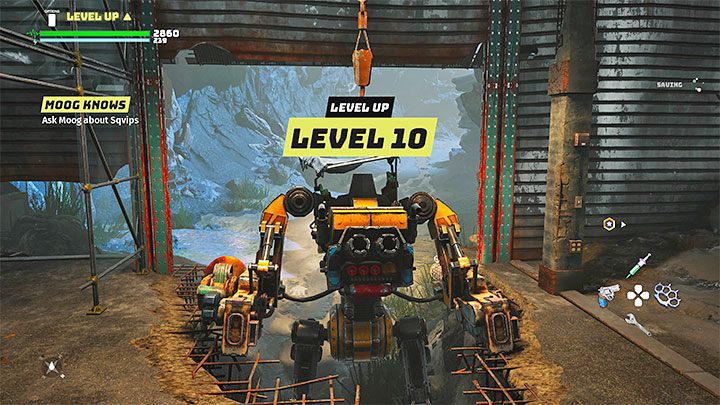 Gaining access to the first mech is described in more detail in the section titled Mekton Mech - how to unlock it? As a reminder, there is a related exploration of The Chugyard location. In its basement you can meet Gizmo and after completing his assignment you will be able to take control of the Mekton Mech. 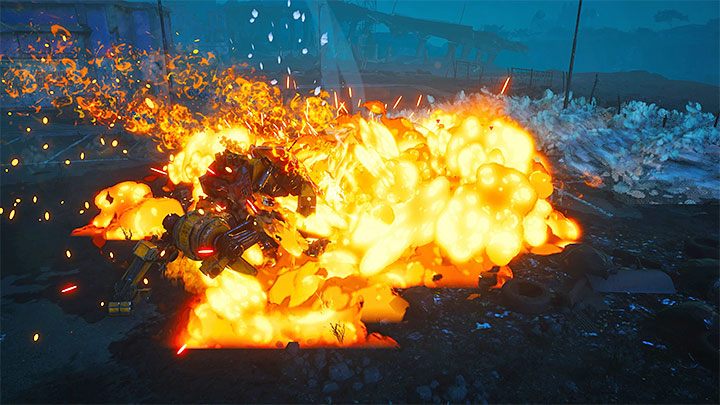 Mech has a number of unique applications. The most important of these are: 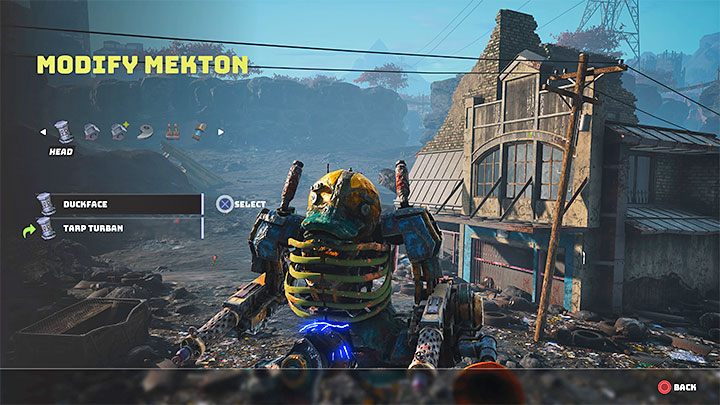 The game allows you to modify the appearance of the mech. You can do this with Wrekboxes, which you can find on the world map. The modification window will be displayed by holding down the bottom direction on the controller. It is worth noting that the installed parts do not change mech's statistics, but only affect its external appearance. 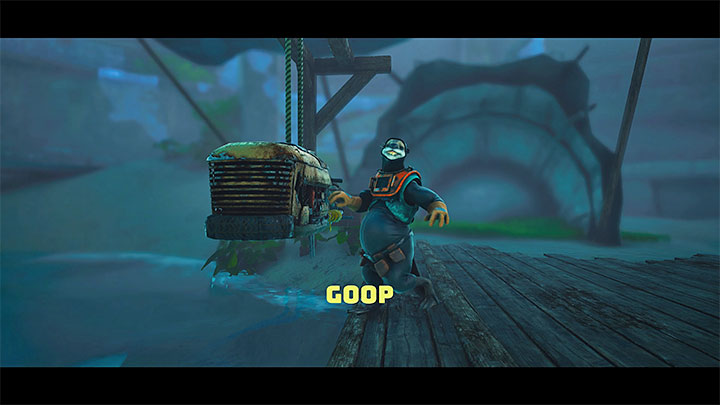 You can unlock the Slippery Slope watercraft by starting the main quest assigned by an NPC named Goop, whom you will meet while progressing through the main storyline. The quest requires you to explore the sewers, deal with enemies there, and find the first Wrekbox. 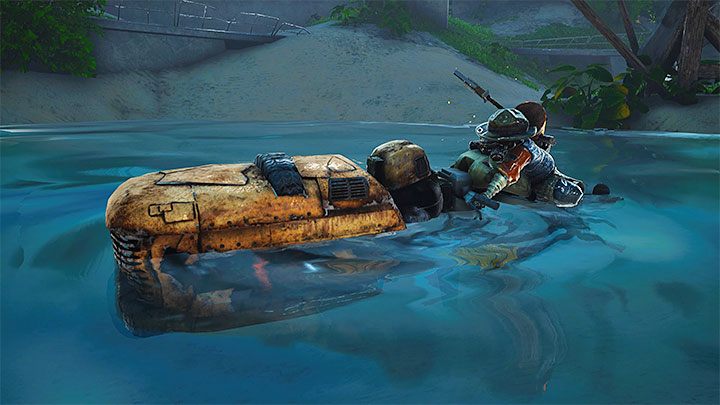 When you return to Goop, you will unlock permanent access to the Googlide watercraft, which you can use to travel around water. It is worth noting that unlocking the machine does not end Goop's story line. You will be able to continue with the same story in order to improve your watercraft.

The jet ski is controlled by the left knob, and you can press it additionally to switch on the temporary acceleration. If you move away from the jet ski or get stranded on dry land, you can select it again from the drop-down menu of modes of transportation (bottom direction key). 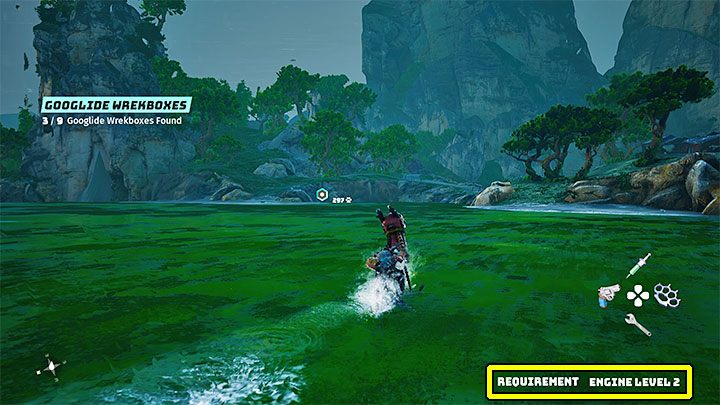 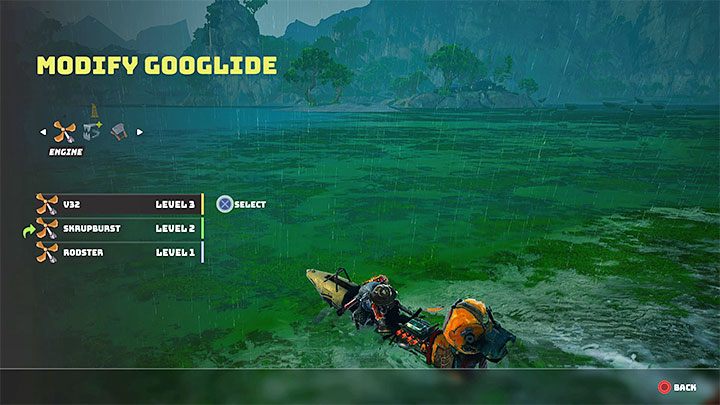 The most important information about a jet ski is that you can't take it everywhere right away. Rough waters can be an obstacle, forcing you to upgrade the engine - information about the required engine level is displayed in the bottom right corner of the screen.

You can find better engines in more Wrekboxes scattered around the map. After getting a new version of the engine, you can hold down the bottom direction key to bring up the jet ski customization window. You can then activate the more powerful engine. Other options are available, but they only affect the look of the jet ski, not its performance and capabilities. 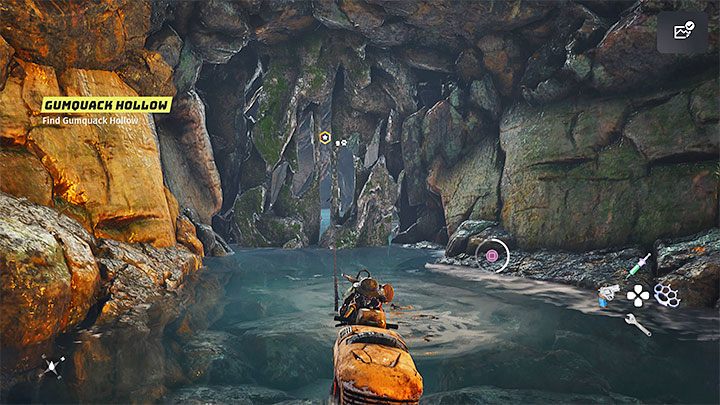 When using the jet ski, you will be able to fire without leaving the deck of the machine. It is also possible to grasp objects from the environment. This can be used, for example, to tear them out (example in the picture) or drag them to another location. 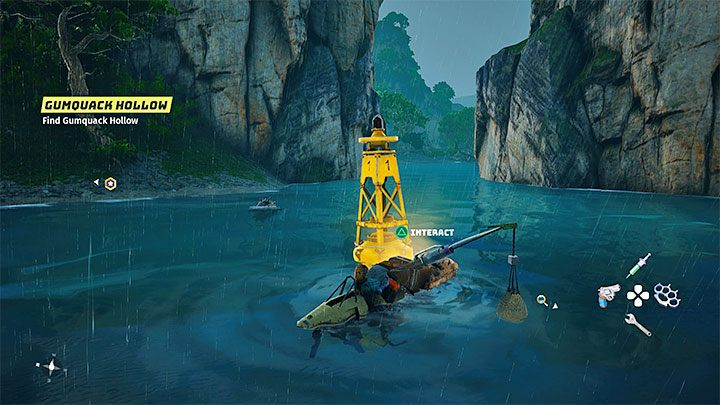 By moving some objects you can, among other things, unlock the fishing grounds located at the life buoys. After you have cleared the area around the fishery, you will be able to go there with the jet ski and start fishing. Instead of fish, random loot is caught.