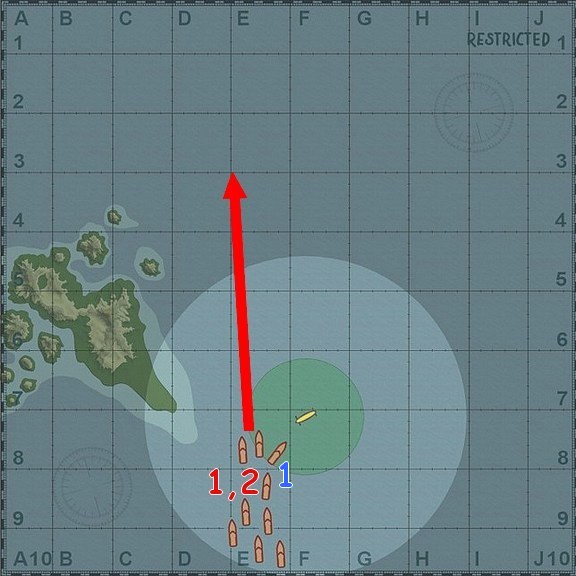 Your yellow submarine (yellow only on map) starts off the game on periscope depth. [#1] You're already placed on the course perpendicual to the Japanese cargo ships convoy sailing to the north. Enemy cargo ships have a strong escort of warships - two destroyers, cruisers (one of them is in heavy version) and patrol boats, so the destruction of two most important cargo ships (2) won't be easy. [#2]

However, at first you must identify these two important cargo ships among the others and report their position (1). In order to that raise your periscope and take a look at the convoy. Game, each time you're playing this scenario, randomly chooses these two ships from among the others. In other words - game will assign two different primary targets each time you will play this mission. And during your gameplay you'll be informed with suitable messages which ships you must destroy (till you identify these targets finally) - program will display on screen names of these ships. Remember these names, especially 1st parts of them, because 2nd is always the same ("Maru"). By finding these two ships among the others you'll complete 1st of primary objectives and these two targets will be marked with yellow triangles and boxes. [#3] By the way - on map you can see only these enemy ships that are entering the green circle around your sub: this is your range of detection when you're submerged. Formally the destruction of all Japanese warships escorting the convoy (1) isn't crucial for finishing this mission successfully (that's only one of hidden objectives), but you make your game easier when you send all of them to the bottom at first. In order to complete this 1st of hidden objectives you have to sink only these big warships, destroying the patrol boats isn't necessary. At first, take care of the Japanese "Yugiri" destroyer, which will head towards you practically just after starting the game. He can be easily destroyed with two torpedos, but first you must lure him into an ambush, using the method of turning on and off your sub's engine that you should already know perfectly from "Hints" chapter of this guide. [#4]

After destroying "Yugiri" you should be already jolly well placed to attack "Mikuma" heavy cruiser - fire a salvo of few torpedos at his board (side) and he will sink just as previous warship. [#5] If after the previous attack (on the destroyer) not every of your torpedo launchers is loaded again by the crew, fire at "Mikuma" these torpedos you can. Then wait till rest of launchers is loaded and quickly fire next torpedos follow the damaged enemy cruiser sailing away. Alternatively, don't wait, but dive under the target (or sail behind his stern) and kill him off with two torpedos fired from the stern (rear) launchers. In a similar way destroy also the remaining two warships - the destroyer and light cruiser. If you must go to the surface to catch some fresh air between your attacks, do it a couple of times (each time emerge only just for a second) and additionally near the side (board) of some Japanese cargo ship, to be shielded by him against enemy warships (search in "Hints" chapter for details). [#6]

When eliminating particular warships from convoy's escort, you can also simultaneously sink the cargo ships, if you have an opportunity. Launch your torpedos by taking an adjustment at a "guess" on enemy ship's movement. However, don't squander your torpedos, although you have approx 30 (4 in front launchers, 2 in rear, rest in magazine), leave yourself four torpedos for sinking these two crucial targets (cargo ships - each of them will need to torpedos to be destroyed). Remember - your main goal in this scenario is to send to the bottom these two already identified cargo ships (2). Although you should be able to destroy couple more of transports earlier. Pay attention also that reloading of your torpedos takes time, tens of seconds. If you want to realize 2nd of hidden objectives, I mean to sink all the cargo ships in the area (convoy) (2), then you should - before you'll destroy both of primary targets - emerge (but only when warship escort is gone!) and send to the coral particular cargo ships by firing at them using your deck gun (to save torpedos). Attack them from behind (stern) to let your gun see the target and fire while their guns (some of cargo ships have these installed on bows) can't target you. Often you will need to use only a few rounds to cause an explosion on enemy cargo ship and quickly destroy him in consequence of this event. [#7] Finally sink also these two main cargo ships (2) - using the gun or saved torpedos. [#8] If you have problems with orientating yourself (understanding) where they are in a current moment, switch to the map and find them on it (I remind you that all enemy ships are displayed on map when they're entering green circle around your sub - your range of detection). Then right-click one of them with your mouse and your sub will head towards a marked target.

Though, you should be careful when fighting on the ocean's surface and watch out for these two small patrol boats. In my humble opinion they are more dangerous and annoying than the "big guys" you've already sunk. Generally, I would strongly recommend to avoid fighting with them: primo - it's not easy to hit'em from the distance using your deck gun, and second - this encounter often causes a damage... of your own deck gun. An irreparable damage, to be precisely, which your emergency teams - even if you'll send all three with a task of repairing the cannon - cannot fix when sub is sailing on the surface. [#9] When you're submerged you can avoid these patrol boats armed with depth charges (in general they're well armed), if they get too close, by turning off the engine (just like you did in case of destroyers). And for God's sake don't raise your periscope if you don't have to (and usually you really don't, because TPP view works fine) - this device attracts the attention of patrol boats! However, if you persist to destroy also these small units, then fire at them using the deck gun and from minimal range (it's easier to hit them). Don't use AA machinegun which is useless in this particular instance. [#10]

However, I strongly recommend to avoid fighting with these small units (as written above). Because if you will even destroy both of them you'll see next enemies - Japanese planes (armed with depth charges), approaching from different directions. [#11] And then you can be in real troubles, because they're attacking you almost simultaneously, so shooting all of them down can be problematic. [#12]