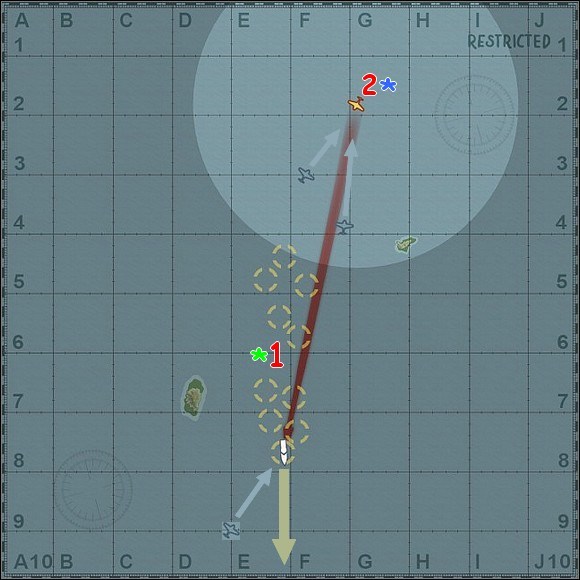 You start off your game with a squadron of Ki-43 "Oscar" fighters (5 aircrafts including your own plane), somewhere over the ocean. Underneath you should see an American naval convoy which consists of 7 cargo ships (marked with yellow triangles) sailing south. You must destroy all of them (1). You'll also see two flights (each consists of 3 planes) of enemy fighters F2A1 "Buffalo" (convoy's aerial escort) flying in your direction. Order your comrades (wingmans) to attack enemy fighters - they should easily and without any losses cut a dash with this enemy because their aircrafts outmatch American planes (the Japanese have higher maneuverability among other things). [Remember: your squadron must survive (2) (at least your own plane) to finish this scenario.] It's best to assign target for squadron members by aiming your crosshair at the enemy and then right clicking him with your mouse, or switching with this button through available targets until you'll find a proper one (American fighters in this case) - his name will appear in the upper left corner of the screen. Your comrades should then engage the enemy - in the lower left corner of the screen you'll see "dogfight" label. [#1] You can also switch to the map (Tab key) and indicate the target for your squadron by clicking with the right mouse button one of two blue icons, symbolizing enemy planes approaching in your direction. [#2] The disadvantage of 2nd method is that your plane will also fly towards the enemy.

However, in the meantime (when your squadron members fight with American aircrafts) you should dive towards the cargo ships convoy sailing to the south and attack him. Because your plane must sink half of the cargo ships (*) if you want to complete secondary mission objective. You should focus your attention on ships sailing at the head of enemy convoy (cargo ships "Brazos" and "Liberty") and sink them first, to not allow any of transports escape from the area. However, during the flight over the convoy, engage one after one all American units that will enter into your crosshair. These ships' decks are vulnerable to your machineguns fire so strafe the deck when attacking enemy ship in his longitudinal axis and diving towards him at a quite acute angle. Decrease your airspeed when you're getting close to stay over the target and fire at him as long as you can to inflict max. damage. [#3] Speed up when you're stalling to avoid crashing yourself into the ocean/target or being killed in consequence of enemy AA fire. Though, if you're attacking the target from his side (board), fire at his deck by strafing to the sides with your rudder (A and D keys). Don't turn back if you have not managed to destroy the target in your first run (you'll take care of him later), but fly forward to engage ships sailing at the head of a convoy. When your squadron members have finished off these two flights of American fighters (you'll see one more flight approaching from the south in the latter phase of the game) also order them to attack American cargo ships, starting from the convoy's forehead. [#4] Assign targets to them by clicking enemy ships with right mouse button in TPP view or using the map. You'll see a label "strafe" when your wingmans attack one of American ships. If your plane is not in good condition and there left a few cargo ships to destroy yet, you can leave the task of sinking them for your squadron members, while keeping yourself away from enemies. After sending to the bottom last cargo ship mission will end successfully. If all squadron members have survived this fight (*) you have also realized hidden scenario objective.