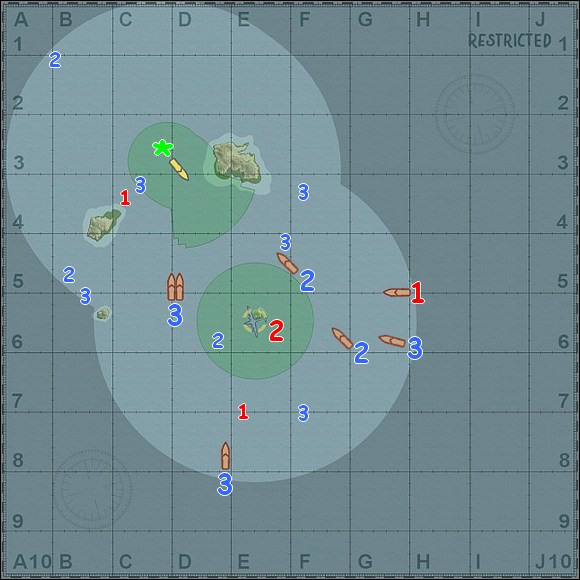 This time you will hunt for the Japanese cruiser "Nachi" you have played him in previous mission. First, you must find and destroy the "Nachi" (1). Each time you play this scenario the game places the "Nachi" on the ocean randomly, as all other enemy warships. Thus I've marked with a ship icon and a big, red 1 one of Nachi's positions (where I spot him in that particular game), while with smaller, red 1s - other potential locations where you can find him playing this scenario several times. I did similar with rest of enemy warships - cruisers (big and small blue 2s) and destroyers (big and small blue 3s). Just after starting the game, but before you'll begin the hunt for Japanese cruiser, you should proceed with all your three American destroyers in the direction of small island located south-east, with an intention to RV (meet) with the reconnaissance seaplane Catalina (2). Then (when you're close to the island) this plane will take-off and start circling over the ocean to help you find the "Nachi". Ok, let's move then. [#1] It's good to order (at the start of a mission) all of your warships to use their torpedos at free will. You'll quickly see some enemy units sailing towards you (at first two destroyers probably). It's a wise idea to attack every enemy warship in this scenario with all your own destroyers simultaneously - this hint refers especially to the Japanese cruisers. Primo: you have an advantage when fighting with rest of your units at your side (together). And second: when acting like this you have greater chances that all of your destroyers will survive the battle (*). That's because when you're focusing the fire of all your units only on one target you're eliminating him pretty quickly and he has no time to hurt you, no time to inflict greater damages to your ships. [#2] However, the realisation of this secondary objective isn't necessary to successfully complete this mission.

And, of course, you should open fire from a max. possible distance, helping yourself with the binoculars and zooming in the view. [#3] It's good to shell with arty and torpedo from both sides (boards) enemy light cruisers, by - so to say - encircling them. [#4] It seems that in this game our deadly torpedos are equipped with friendly-foe recognition system, so they can't hurt you even if they missed the enemy warship and now are heading right in your direction - they should explode earlier, before they'll hit you...

You can also - when you're heavily damaged - shield yourself from the side enemy is attacking you with one of friendly units and prey that the opponent will concentrate his attention on nearest target, giving you time for necessary repairs. [#5] In this mission you must watch out very much for enemy torpedos, I mean to look often at the map (fully zoomed in) and take evasive actions when you see torpedos coming in your direction. [#6] However, if you're out of luck and you were hit by anything (torpedo or artillery round) immediately switch to repair's panel and quickly fix the damages.

When you have finally reached the island where you should meet with the reconnaissance plane (2), this aircraft will take-off, then start circling in the air and pretty fast indicating you the position of the "Nachi" Japanese cruiser. Unfortunately you can't give orders or control this seaplane. [#7] To destroy the "Nachi" (1) it's best to engage him simultaneously with all of your destroyers - as you did earlier with other enemy warships. [#8]

Launch at him all the torpedos you still have. [#9] Open fire at him from every operational deck gun. If the enemy has sunk one of your destroyers you should have a possibility to switch to another and continue the fight. Finally your opponent will sink. [#10] If you have managed to destroy all Japanese warships (1), including the cruisers (2) and destroyers (3) you have also completed all hidden objectives of this scenario.