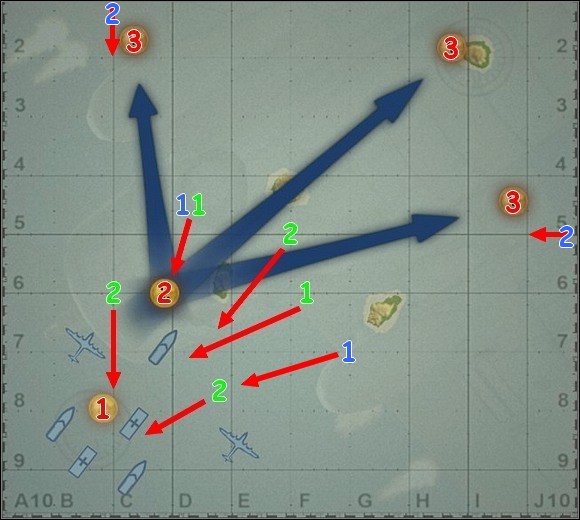 Now it's time to play a decisive battle. On one side your forces which consist of two aircraft carriers (USS "Enterprise" and USS "Hornet" wit their planes) plus a cruiser and two destroyers as an escort. [#1] On the other side - similar Japanese forces. [#2]

When you switch to the tactical map you'll see two enemy cruisers heading in your direction and a few aircrafts circling over these warships. So, take-off from both carriers you have at your disposal with suitable reactionary forces, I mean - with fighters. But don't launch too many of them yet, leave yourself an opportunity to start off with a squadron (or at least a flight) of "Avenger" torpedo planes later. Assign some small fighter escort to both Catalina seaplanes that are circling over your own warships (two fighters per Catalina should be enough). There is no danger lying in wait for you in the air for the moment, so attack straight off with a mentioned "Avengers" closest enemy cruiser - this one heading from the north. You can also send to the fight your warship of similar class. [#3] At the same time your destroyers will detect the presence of the Japanese submarines (submerged) - at first they'll find one sailing from one of possible directions: north or north-east. Order them to attack this sub with their depth charges. [#4] One of your Catalina seaplanes can also hit this enemy. Later on sink in a similar way another submarine (2) hiding near the closest island to complete 2nd of secondary objectives.

Shoot down also enemy seaplane (1) flying around the Japanese cruiser with one of your fighter squadrons/flights, then another one which will most likely approach from north-east. This way you'll realize first of hidden objectives (these Japanese seaplanes most surely report the enemy your position). [#5] First of mentioned earlier Japanese cruisers should be sunk without any problems by your torpedo planes, before you will even get close to him with your cruiser. [#6] Similarly deal with 2nd cruiser approaching from north-east and you will complete 1st of secondary objectives i.e. to destroy the patrolling Japanese cruisers (1).

Meanwhile your seaplanes with their little escorts should patrol aerial area over the nearby islands (and the ocean generally) and search for two Japanese aircraft carriers (2) hiding somewhere around the places marked on my map with (3). Enemy carriers can be found in one of these places - in my games they were usually on east, I've also founded them once on north-west. When you will find out finally where they are in your game, send between them and your own aircraft carriers rest of your warships and fighter planes. The warships will have a task of shooting down enemy planes flying over them and shielding the "big guys" (your carriers) against the Japanese torpedos released by these planes. And your fighters must simply destroy enemy aircrafts before they'll get close to your "floating airfields" because at least one of American carriers has to survive the encounter (1). [#7] Oh, and you can hide your carriers behind the islands to make an attack even more difficult for enemy torpedo planes - they will have to perform additional turns in order to accurately strike your carriers' boards with their torpedos. [#8]

As you suspect, your task now is to destroy the Japanese carriers (3). But - in the first instance - systematically send pairs or trios of torpedo "Avengers" to sink enemy destroyers. [#9] Use the whole (full) squadron (5 planes) against the Japanese cruiser. When all warships escorting the carriers are heading to the bottom it's time to attack these "floating airfields" with own cruiser and destroyers, while your fighters still shoot down enemy planes (systematically send them some reinforcements when they're taking losses). [#10]

Your warships shouldn't have problems with Japanese carriers. Mistreat the enemy with your torpedos, fire also a few artillery salvos. Although you'll see enemy reinforcements (two cruisers and two destroyers) entering the map somewhere near the Japanese carriers (red arrow close to (3) on my map) you don't have to worry about them because... at this moment mission should end successfully. That's because Japanese aircraft carriers are sinking. [#11]

[However, if you want to realize 2nd of hidden objectives you must destroy these mentioned Japanese reinforcements (2) before you'll send to the coral enemy carriers. How to do this? Similarly as you did it earlier with Japanese warships escorting the "floating airfields" - engage the reinforcements with your torpedo planes at first: attack each of cruisers with the whole squadron of "Avengers", send a pair or triplet of these planes against every destroyer). Then kill'em off with your own warships. [#12]]