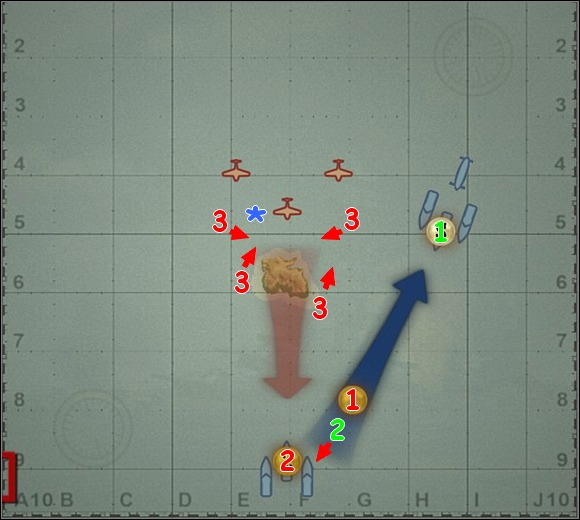 Your first task in this mission is to meet with Royal Navy forces at the given coordinates (1). So order "full speed ahead!" and sail to the marked area. The Brits had to be around here somewhere although you can't see them... [#1] Instead of them you'll see the Japanese bombers and torpedo planes quickly flying from the north towards your small flotilla. Quickly change the formation and place both your destroyers on your own cruiser sides: primo - when they aren't sailing in the row formation (behind your warship) the enemy shouldn't be able to sink all of them in one bombing run, and second- enemy torpedo planes will attack you soon from sides (boards) and in this kind of arrangement (destroyers on cruiser's sides) you are pretty nice defended (shielded) against their torpedos by these destroyers. Better to loose one scrubby destroyer then your own warship, right? At last USS "Houston (your cruiser) must not sink (2) if you want to successfully finish this mission... Besides, enemy torpedo planes attack only from one side, so one allied destroyer will be shielded against their torpedos by your own cruiser - it's important because you will need this destroyer later. [#2]

Take evasive actions to avoid Japanese bombs, try to quickly shoot down enemy planes when they're far, before they can even think about releasing their deadly load. Use your binoculars and zoom in your view - that's the best method. [#3] If you see bombs falling off the aircrafts' bodies that's a good moment to dodge, turn round. Focus your fire only on these Japanese you have in front of you (on these that are attacking in a suitable moment), don't shoot at them if they already released their cargo and are turning - you will have an opportunity to fire at them later. That's because Japanese pilots will attack this time from the side (your left probably) and on low altitude. [#4] Knock them down to the ocean from max. possible range, using the binoculars and zoom initially. Look at map when you have time (zoom it in maximally) to recon where torpedos run and take suitable evasive actions to avoid them - perform turns, speed up or slow down, sometimes even stop.

Finally enemy planes will fly away, but you will encounter on your course to the meeting area (1) another danger - the Japanese submarine (2), submerged and sailing directly towards you. It's time to break the formation and send the destroyers (I hope you still have at least one) forward to play with Japanese sub. [#5] They shouldn't have problems with sending this enemy sub to the coral (2) using their depth charges (your cruiser unfortunately hasn't such a weapon) and one of secondary objectives will be soon completed. [#6]

Now it should come to light that you didn't see the Brits in the marked area (1) because they are currently fighting with Japanese forces to the north from a nearby island, somewhere round the place marked on my map with *. Of course you will join this battle with a pleasure... [#7] Enemy forces consist of a cruiser and two destroyers and Brits have similar flotilla that should also be given under your control now. You can split your forces and strike Japanese cruiser with both your warships of similar type (American USS "Houston" and British HMS "Exeter"), leaving these enemy destroyers (sailing south-east) for rest of your warships. [#8]

You can also attack Japanese destroyers with "Houston's group", leaving the task of sinking the cruiser for "Exeter's group". In this second case arrange both groups in row formations (one ship sails behind another) so each of your warships will be able to fire at the enemy without interfering with another - then you will have a great firepower. [#9] Pay attention only that both of your main (flag) warships, I mean "Houston" and "Exeter" cruisers, should survive this battle - especially the first of them (primary mission objective (1)), additionally - the second (secondary mission objective (1)). As usual watch out for enemy torpedos launched by Japanese destroyers - try to quickly sink these units with well-aimed artillery salvos, for example. [#10]

Prepare the same fate for Japanese cruiser. [#11] Immediately repair any damages of your flag ships because one more serious battle waits for you in this scenario yet. Namely you'll see Japanese battleship "Haruna" in a company of three destroyers. [#12] This battleship appears in different locations - it's realized randomly, I think. I've marked on my map these locations (3) where I saw him when I was playing this scenario a couple of times. Your goal now is to sink battleship "Haruna" (3), of course.

You can order your survived destroyers to fire the torpedos at free will and send these warships to the fight with enemy ships of adequate type. [#13] An allied submarine will be also given under your control now - by using the patent of luring the enemy into an ambush by turning on and off the sub's engine (take a look at 'Hints" chapter of this document), support with this submarine other warships, by sinking smaller Japanese units with two torpedos. [#14]

But first of all, try to applique the whole salvo of four torpedos into the board (side) of the mighty "Haruna". [#15] This warship is slow (as battleship supposed to be) so it shouldn't be difficult to hit him. Meanwhile try also to encircle this enemy from both sides (boards) with your cruisers. [#16]

Kill off this Japanese monster with couple of accurate artillery salvos, you needn't take a big adjustment on his movement/his speed. [#17] The battle is over when enemy kisses the bottom of an ocean. [#18] If you have managed to prepare the same fate for all enemy warships you have also completed mission's hidden objective (*).