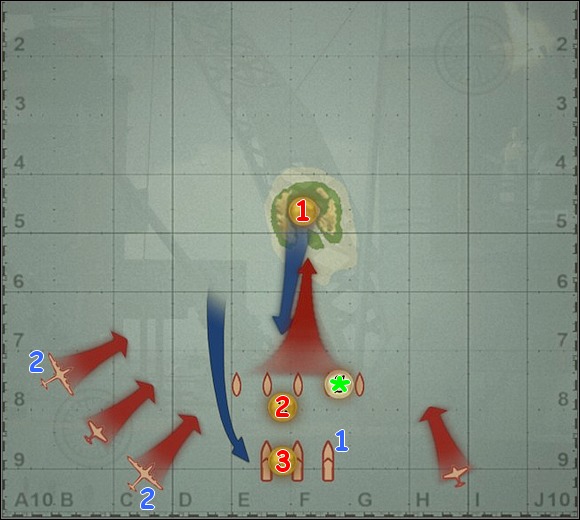 For a kick-off view an intro movie - you're getting told off on it first, but a moment later a next task is assigned to you and... a new patrol boat of class Elco, PT 108. [#1] You start off your proper game in the harbour, somewhere on the Philippines. You don't have an access to the map again, probably it's a standard when operating on patrol boats. Sailor on your boat has problems with turning on the engine while the Japanese invasion on island starts. You see over the harbour first enemy aircrafts - fighterplanes and bombing planes (inclusive dive bombers). You should leave the harbor now and in one piece (1) but before your crew will be able to start up the engine take care of enemy planes. [#2]

If you want to complete one of hidden objectives concentrate on enemy bombers - shoot down at least five level bombers G4M "Betty-II" (2) flying on high altitude. Take an adjustment on their movement while aiming at them and shoot using your .50 machineguns - don't bother to aim at their engines as game suggested during the scenario loading. Shoot using the external view when enemy bombers fly by close, use your binoculars and zoom in your view when they're far. [#3] When your sailor has managed to turn on the engine head on to the open sea, in the direction of one of these yellow triangles you see on picture [#2]. It's time to repel the enemy invasion on the island. [#4] There's no sense in sitting here, in the harbor, because Japanese aircrafts will finally target even your small patrol boat.

When you have left the port you'll be probably attacked by enemy fighters (they fly in pairs) practicing the hedgehopping. [#5] Shoot back: if you want to quickly send them to the ocean start shooting at first of them when he's pretty far, using the binoculars and zooming in the view. Your crew should also know exactly what is the general purpose of machineguns installed on your patrol boat, but if they don't want to use them for some reason, better check whether the "free fire" option is turned on in order's menu. [#6]

However, your main task here, in the open sea, is to destroy all Japanese landing crafts (2) (these smallest boats). The Japanese must not land more than five boats (2). Furthermore, you should also sink two landing ships (2) (those of medium size) and transport ships (3) (the biggest ships in number of three). One of your hidden objectives is also to send to the bottom Japanese destroyer from the escort (1). First, take care of these smallest boats fully loaded with Japs and quickly pushing to the island - you can destroy them efficiently and spectacularly using even your machineguns, zooming in the view with middle-mouse button if necessary. [#7] Though, watch out at what you're firing because there are other American PT boats operating in this area and they can be easily mistaken with the enemy. After completely destroying the first wave of landing boats (*) (this is secondary objective) you'll be able to use the torpedos your patrol boat is also armed with. Switch to them by pressing Shift key. Launch one torpedo at each landing ship of medium size (LST Landing Ship) transporting Japanese tanks and vehicles - this should be enough to send them to the coral. [#8] Fire your torpedoes from minimal range to not give the enemy a possibility of avoiding them.

You can sail without any fear very close to the Japanese destroyer assuring the invasion forces (he's nearby) and sink him with two torpedos. [#9] Finally take care of three enemy cargo ships (these biggest in light painting) launching on the water those smallest boats you've been destroying earlier (and now do the same if you see'em again). Fire to torpedos at each of these cargo ships to stop them from launching those boats. [#10]

Sinking them should finish the scenario. [#11] Time to see another cutscene which will lead you to the conviction that you'll be commanding something bigger than the patrol boat in next mission, a Clemson-class destroyer namely. [#12]