Lets start off with couple of hints - some of them probably seem trivial and obvious to you, but it's easy to forget about even such simple things, when playing this very dynamical and quite difficult game.

Ok, time to be more concrete.

When you're commanding a submarine the biggest threat for your ship presents enemy destroyers and patrol boats - both equipped with sonars and armed with depth charges. And even if these small patrol boats have no sonars, their crews have probably 6th instinct of detecting submerged submarines - all my experiences lead to this conclusion. You can avoid these enemies by diving to level 4th (max. submersion), however, water pressure on this level slowly but unrelentingly crushes your submarine's hull - first, and second - it's a temporary and partial solution. So it's better to pick up the glove and to fight the enemy. And you have a one, very effective way to win this. Let your enemy detect you with his sonar when you're sailing on the periscope depth. He is closing then and when he's very close (let's say 2-3 lengths of his hull) - stop your engines. Your speed decreases to zero, you stop making noise and enemy is losing sound contact with your submarine. So he is turning and traversing your submarine's course ahead her bow or behind her stern. If he don't want to cut in your course for some reason, just turn on the engine and shut it down once again after few seconds.

The description above applies to situation when enemy destroyer is closing from your board (side), but if he's approaching from the stern or bow, parallel to the submarine, you can deal with him in the same way, except that after shutting down the engine enemy will make a turn leaving your course. And then you must quickly fire two torpedos before he will move too far away to one of your sides (boards).

The submarine under your command unfortunately needs to come to the surface from time to time, to allow your crew to take a breath of fresh air. But emerging when enemy is close can be dangerous (damn, it is!) from obvious reasons. So you have three tricks to minimalize that danger. First - come to the surface when you're far enough from your enemies. Try to stay backwards to them, to expose only your stern to enemy fire (you will be presenting a small target then), eventually manoeuvre hard to avoid artillery shells. It's even better to sail away, turnaround and emerge with bow pointed at the enemy, so your deck gun can open fire - but you must plan such a maneuver properly earlier... Then take a deep breath catching max. amount of air and dive again.

To sink enemy destroyer or cargo ship you will need two torpedos, cruiser wants three or four (depends on his version - light or heavy) before he'll head to the bottom, bigger warships like battleships and aircraft carriers require even six torpedos. This note refers to all kind of torpedos - these launched by your submarines and destroyers, but also dropped by your torpedo bombers (airplanes). Before firing the torpedos try to get as close as possible to the enemy to not give him a chance of avoiding your salvo. Oh, and try to perform your torpedo attacks (especially when using airplanes to these purposes) in short time intervals. Otherwise the enemy - after collecting a few torpedos that didn't sink him though - will fix (patch) all holes/leaks in his hull and.. the whole party starts from the beginning (well, almost).

Besides, enemy airplanes (torpedo-bombers), when approaching the target, will have to make their way through the AA fire wall raised by our ships screening the big guy.

On the other hand, when we're fighting with the enemy using our deck guns (artillery), and with several ships, we should place all of them in a row formation, one behind another, to let all of them fire at the target without interference - the firepower is then great. And, of course, we're trying to stay sideways to the enemy with all our ships to let every deck gun fire.

The dots you see under the crosshair - green/yellow/red/purple - denote whether the deck gun (one of these dots) can see the target/the target is in range/you can fire at him (green dot), the gun is reloading or turning towards the target (yellow), the deck gun can't shoot at a target cause he's out of range or the deck gun can't see a target or the deck gun is damaged (red). Purple dot can be seen probably only when commanding a submarine and denotes that you have no more torpedos for suitable torpedo launcher (unfortunately you can't reload them in base/shipyard).

[However, if you decided to make your way home with these aircrafts remember, that during their return they can help your fighters and shoot down a couple of enemy planes.] Additionally, to be sure that most of our bombs or torpedos will hit the target, you can attack him only with one unit at the same time (lead that unit personally), while rest of squadrons wait closely but on safe positions for their turn. When job is done by your first unit, switch to next. This way you have an assurance that nobody will fail (screw-up) his job.

The most dangerous damages your ship can sustain and that have direct impact on his vitality are water leaks and fires. First are created mostly in effect of torpedos impacts, second rises as a result of bombardment. All those damages can be fixed in the repair's panel (press R to open it), by sending emergency teams (those little human figures) to adequate compartments/with suitable orders (patching the holes, fire fighting). It's good to hold one of these man in each of neuralgic locations all the time and from the beginning of a mission, to quickly deal with problems. So, for your carrier, place one man in locations called "water", "fire" and "flight deck". For rest of your ships place these emergency teams in spots "water", "fire" and "weapons" (mainly deck guns are there). Location called "manoeuvre" is not so important and you can assign people there only when you see some failures.

From time to time (particularly before starting the fight) you should look into the location called "weapons" in this repair's panel (by default you can't see your weapons there) and check the condition of your deck guns (red colour means that gun is heavily damaged, yellow - damages are minor, etc.). Otherwise you can "wake up with one hand in the chamberpot" - this is old Polish proverb ;-) that means, in this particular situation, that in crucial moment of a battle you have no guns to fire, because you forgot to repair them earlier.

Finally (yup, that's all, folks - no more obvious hints :-)): tactical sheet (in-game available after pressing Esc key and then "tactics" button, or something like that - so uncomfortably) showing which our units have chances (and how big) when fighting against suitable enemy units (this green mark denotes that our unit has good chances against the enemy, red X means no chances and dash - potential duel will remain indecisive): 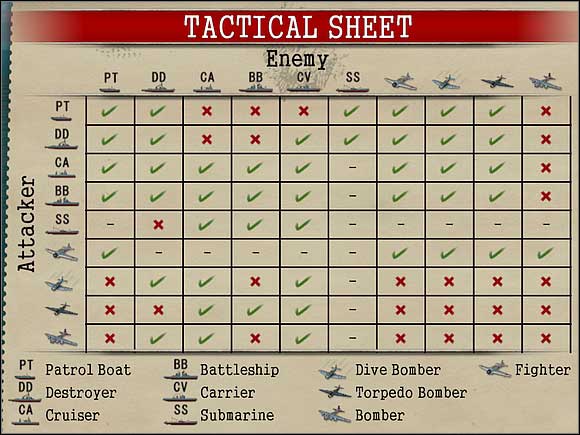 However, the correctness and usefulness of this sheet is controversial: for example it points to the conclusion that the submarine has no chances when dealing with enemy destroyer, but I already told you earlier in this chapter that things stand just the opposite :-)...