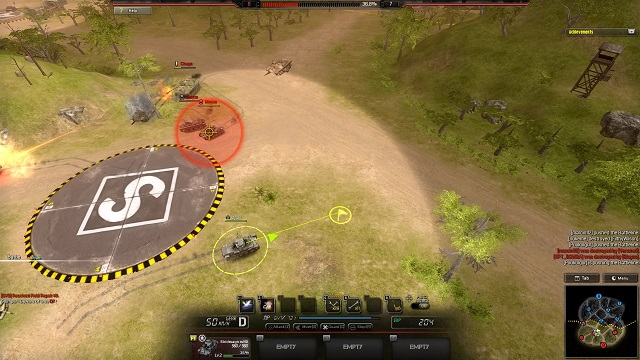 In this chapter, you will learn about the basic aspects of fighting and you will also find some useful tips that should interest you. Controlling a tank is not a very complex task - using the right mouse button or WSAD keys, we can move the machine and by moving the mouse or arrow keys, we change the position of the camera. You can of course move the tank forwards, reverse, turn left and right. Right mouse button is responsible for shooting. To make the attacks more effective (and also to make sure that they hit the target), we should follow a certain rule. Every machine has a specific range of attack, within which it can pick potential targets. When we already find a target, we should aim at it in such a way so that the red circle starts to get smaller and eventually turns into a single point. This means that the missile will hit the target for sure and deal a lot of damage. Not using this technique will make you risk missing the target or dealing less damage. It is also worth mentioning that the direction in which the tank is moving doesn't always equals the direction of the cannon, which can turn 360 degrees. Because of that, we must always be careful and do not allow a situation in which we shoot in a totally different direction that we want to. That's all from the basic information, however, we should also mention one graphic flaw (or maybe it's an intended feature) a of the terrain, which allows us to drive through other machines or smaller obstacles, like for example trees. This doesn't apply to large buildings city terrains, which function in normal way.