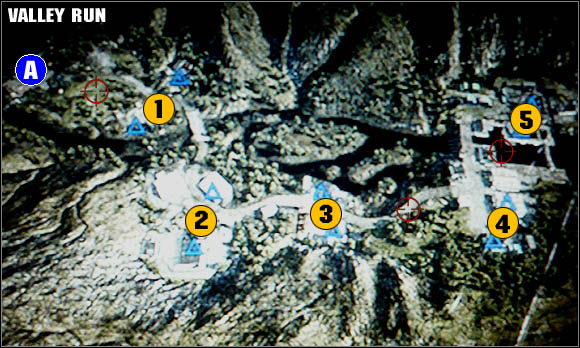 The terrain here is flat... with a few exceptions. There's a river flowing through the central part of the map, but it actually doesn't matter. Even if the bridge on it (near point [2]) is destroyed, vehicles and infantry can successfully use the shoal nearby.

Vehicles don't play a significant role here, but the attackers often use the light tank support in their assaults on the gold crates. Actually however, it is difficult to drive a vehicle near the gold crates, and that's because of the snipers watching the terrain and marking all the tanks with their laser designators.

There are also a few locations, in which the amount of marksmen is higher than in the other ones. The first one You can see just at the beginning. It is that meadow and hills between the attackers and the first pair of gold crates. In here, snipers of both teams try to pick off each other.

In point [2] You can also meet some snipers, but actually these guys over there think mainly about marking vehicles with laser designators. You'll see more of them on the slope, in front of point [4]. This region is heavily fortified (the defenders have here a few watch towers and a bunker), so snipers, soldiers with rocket launchers and people equipped with a MRTR-5 device are quite common there. Naturally, You can meet some tanks in there too.

The last region of a fierce fight with the usage of long-ranged weapons is located near the water, at the dam. Players are shooting each other, so the bullets fly above the water, from every possible position - windows, from between tanks, etc.

I have to admit that mines are very popular here, especially in the closest vicinity of the buildings with the gold crates inside.

The players usually divide into large groups of Assaults, snipers (Recon) and Supports. Thanks to that, they can support vehicles, that provide an inevitable help in attacks on gold.

The grenade launcher on the building near point [3] is INSANELY important here. Remember that there always have to be a shooter at that launcher (preferably the one with a medipack, so an Assault or Support soldier). Fighting enemy infantry with that weapon can literally change the course of battle. The weirdest thing is, that the attackers rarely try to pick off the shooter. That gives him a lot of opportunities to get some frags and defend the gold. In order to defeat vehicles, the defenders need some Demolition class soldiers. What is more, that kit has a shotgun, so players with it can fight the enemies trying to attack crates from the north.