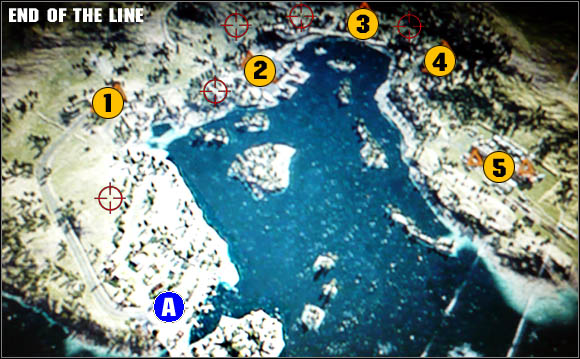 End of the Line is quite a flat map. All the bases are located at the shores of a small gulf. Tanks dominate on this map, and I mean both light and heavy ones. Moreover, each side has a helicopter (either there should be a real flying master in the cockpit, or nobody. We don't want to lose men senselessly, right?).

A massive field between the attackers and the first pair of gold crates allows snipers to eliminate single soldiers, especially those armed with rocket launchers. Marking enemy vehicles with the laser designator is also possible. Support class soldiers can also call artillery strikes from there and tanks can easily fight each other. Everything written above refers to both sides of the conflict.

When the battle takes place in the northern part of the map, near [2], the situation changes a little, as the attackers may use boats. Disembarking at the harbor and capturing the AA gun near the water helps in eliminating enemy infantry and crushing walls, which usually disturb in destroying gold crates.

Moreover, note the small forest, located south west to the point [2]. From there, the attackers can aim and shoot at the defenders on the harbor. The forest can be also one of the routes leading to gold - the space between containers located at the fence near the trees is big enough, so tanks can drive between them.

Snipers may also find a vantage point on the slope of the hill, located in the northern part of the map (marked with three crosshairs). You can see points [3] and [4] from up there. A pack of marksmen won't probably change the tides of battle, but can make the enemy really upset.

About one I already mentioned above - attacking point [2] from the water and capturing the anti-air gun can draw the defenders' attention, so the tanks can do some more serious damage. Moreover, each time the defending team is falling back to another pair of gold crates, some soldiers are instantly grabbing some stationary rocket launchers and waiting for first enemy tanks to show up.

It is a nice idea to complete tanks crew in a way, in which the gunner using the machine gun on the turret has a Power Tool. Such a crew can survive longer on the battlefield. What is more, if You see that the pilot of Your team's helicopter is an real master, You can check from time to time how he's doing and eventually repair his machine if it needs it.

The most common kits here are Support (great firepower and artillery), Recon (long-ranged weapon and a laser designator) and Demolition (the best against vehicles). From time to time You can also meet some Assault class soldiers. It's quite good in those attacks from the water and inside the base, where the last pair of gold crates is located.