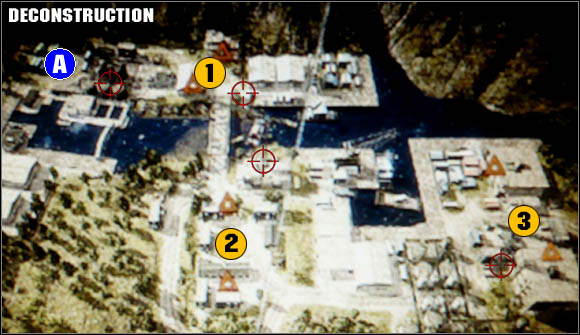 We've got here only three pair of gold crates. Everything takes place in a base located at the river. There are only light tanks (one for each side) at players' disposal. The terrain is generally flat, but however, there's a lot of vantage points that may be used by snipers. And so, in the north-western part of the map, it's a footbridge leading through fuel reservoirs, used very often by the attacker's team. 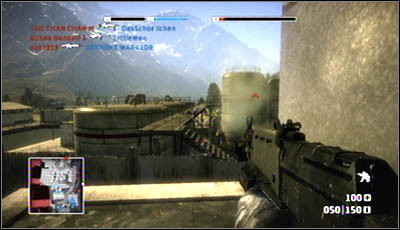 The vantage point indicator located near [1] on the map above means actually that all the rooftops in the vicinity of the first pair of gold crates are being used by the attackers after destroying the first pair.

On the other hand, we have construction cranes in the southern part of the map. They're great vantage points, so they're often being used by snipers of both sides of the conflict. If You receive a sniper bullet, check if the shooter is on one of these cranes.

Actually, every single rooftop can become a useful vantage point on this map. And there's a lot of them here. What is more, notice that the bridge connecting the southern and the northern part of the map is blocked; only infantry can use it, but I don't advise it, as it is under constant sniper surveillance.

The defender fighting near the second pair of gold crates should be aware of one important thing. The gold located on the higher level in a blue barrack can be easily destroyed after making a hole in the wall. When that happens, every soldier with a rocket launcher and the light tank driver can destroy it from the other side of the river. And even the machine gun emplacement next to the crate won't help - snipers actively working in this area watch everything, especially the guys near the gold. 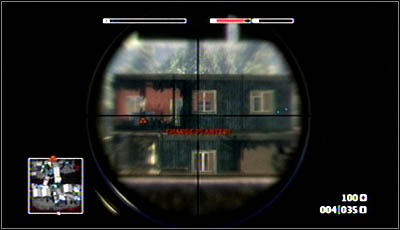 The attackers must cope with constant artillery attacks at the beginning of the round. Actually, it isn't so difficult to survive. Also, note that the light tank can't just drive into the enemy's territory, as there are concrete barriers located on the road. The infantry should help the vehicle deal with this problem.

Defenders at their first gold crate usually concentrate in the closest vicinity of their gold. Because it is located under roofs, the crates cannot be destroyed with an artillery fire. The situation changes at the second pair - this is where the most of the team focuses on the bridge, leaving one of the crates in the south. That allows the attackers to perform a swift and efficient assault from... the east. To do that, they have to swim across the river, and then - walking next to the crane - surround the whole enemy camp. It takes a lot of effort, but the result can be positively surprising.

The most common kits here, are: Support (firepower + artillery), Specialist (extraordinary short-range weapon) and Recon (high cranes on the map!). And here's a little extra tip - better don't enter higher levels of buildings if You don't have a sniper rifle. A soldiers without the ability of returning sniper fire is practically a sitting duck here.