In this chapter you will descriptions and analyses of both new vehicles added by the Booster Pack. They have been checked with respect to weaponry, number of seats, use in the battle and other additional conveniences. Both advantages and disadvantages of vehicles have been mentioned. There are also pictures of the new machines and information about which side uses specific vehicles.

Analyses are divided into two parts. The first one is a general description of features, good and bad points of a machine. Bold texts are extremely important information.

The second part shows how much energy a vehicle lose after an anti-armor attack. Bold texts marks the highest values. I hope this will make the analyses clear. 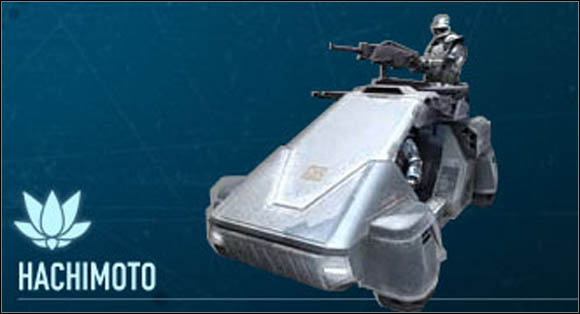 Hachimoto is the fastest vehicle in the game. It hovers over the ground, and it moves similarly to Nekomata tank known from BF2142. It has two seats. The first one is occupied by the driver, who not only drives, but also kill enemy infantry with his anti-personnel guns, which work just like these installed in PAC battlewalkers Bogatyr. The second member of the crew has much better and dangerous weapons - an awesome grenade launcher (it has a few barrels, so works like a minigun! Yeah! Infantry is helpless against this!) and a bit less awesome guided anti-armor rocket launcher, similar to the one that is installed in gunships.

Hachimoto is undoubtedly the fastest vehicle in the game. Just like recon vehicles, it has an additional boost too. The machine is so fast, because people projecting it removed (or put light) armor. That is why the driver and the gunner are exposed and they can be killed even with a traditional firearm. Hachimoto itself turns into pieces after one accurate shot from almost any anti-armor weapon. A good driver should use the speed of his vehicle to get out of troubles.

It doesn't really matter where we hit the Hachimoto, as the shot always takes away the same amount of energy.