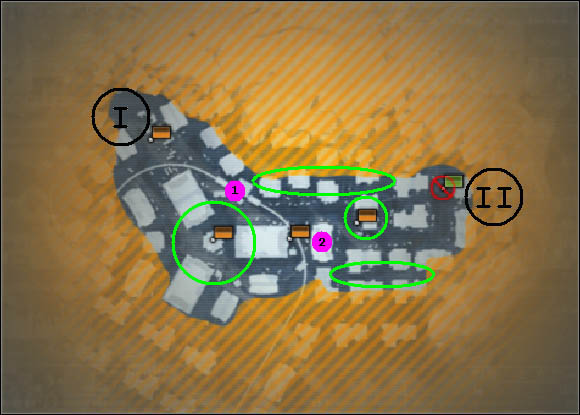 Map description: Battle takes place in the capital of Germany, Berlin. There are many long straight roads, which can be used by snipers and soldiers carrying light machine guns. Sky-scraping blocks of flats with high balconies dominate here, providing great vantage points. Moreover, thanks to these structures, throwing grenades really accurately is possible. Both teams shouldn't forget about short and narrow lateral roads, which allow soldiers to get behind the frontline unnoticed. Terrain in the city is flat, only buildings and other obstacles complicate the geometry of the map. Always pay attention to balconies mentioned above. Groups of infantry placed on them can be a danger as good as a target. Heavy machinery and its many adaptations require using rocket launchers and RDX's by Engineers and Recon soldiers. But on the other hand, participating in intensive infantry fights needs carbines for medium and short distance and that is why Assault and Support kits are the most popular here. Domination of infantry means a lot of work for APC vehicle, which has to use its anti-personnel bombs to clear every single square meter of the city.

Analysis: Two green ovals in the north and south marks lateral roads, which may be used to get from one side of the map to another. Big green circle in the western part marks a circus surrounded by skyscrapers with balconies, which are extremely good vantage points. Soldiers trying to capture the flag placed in the middle of the circus should keep an eye on them. Next green circle, in the east this time, is marking the region of the very first (and very intensive) confrontation in the round. Flag in there can be assaulted from a few different directions and attacking it with grenades is a piece of cake. These two things make defense a bit difficult. Vantage point [1] is an aboveground train station, which can be reached by climbing a ladder. From there, it is possible to see the spawn point on the circus and the wide road placed in the central part of the map. [2] is a building with a balcony, which allows swift and efficient attacks on both nearby flags. EU and PAC have got their main bases in point [I] and [II]. One battlewalker and an APC vehicle respawn there.

Strategy for EU: The game starts with the defense of the eastern flag. It is the region of embittered fights. The longer the flag will be in EU's hands, the later the enemy will assault spawn points in the western part of the map. Battlewalker L-5 Riesig and the APC should eliminate enemy forces and defend their own soldiers. The team should also keep an eye on the lateral roads, which enemy often uses to get through the map and capture flags in the west. It would be a nice idea to play with Support kit and deploy a sentry gun it there. Grenades are a great weapon on this map. Use them to eliminate infantry trying to capture control points and these on the balconies. Building [2] is quite useful while defending eastern flags, because from there, it is possible to shoot at PAC vehicles and soldiers, coming from their main base. If the enemy manages to take a flag in the western or central part of Berlin, it'll be necessary to launch an ordinary counterattack, from the nearest EU spawn.

Strategy for PAC: The strongest unit in the PAC army is definitely the APC vehicle BTR-4 Romanov. There should at least to soldiers in it and an assist of an Engineer who will constantly repair the vehicle. Battlewalker will have to prevent enemy L-5 Riesig from destroying the APC. Swift attack of heavy machinery and infantry on the eastern EU flag will probably do the job and the spawn point will change the owner. Similar strategy should be used while assaulting flags in the western part of the map, but beware of infantry with anti-tank weapons, occupying balconies. Moreover, guard literal roads - EU will try to recover lost points and they'll probably use that route.