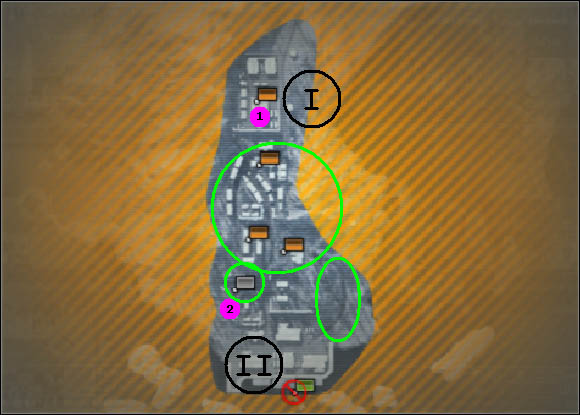 Map description: This area includes a little village by the seaside. This is a close combat map, so infantry fights are popular here. Heavy machinery has limited role on Cerbere Landing. Swift movement, forming squads, teamplay and map familiarity are really important are the key to success. Pay attention to buildings disposition. It doesn't allow heavy vehicles to move comfortably, however infantry can use it to prepare anti-personnel traps or to steal through under enemy's nose. Moreover, check the terrain geometry - village is placed on a quite steep slope of a mountain, what can be used by soldiers equipped with sniper and assault rifles. Distances among flags are, in fact, short, but as a result of intensive fights, flags often change owners.

Analysis: Huge green circle marks three flags placed in premises, in the centre of the village. This is the place of embittered infantry fights, especially between two initially EU spawn points in the south. Green circle with neutral flag inside is also a place of intensive struggles, but PAC battlewalker sometimes joins the fight here. Third green circle, or rather oval, localized in the east, marks way through the forest, which PAC may use in order to get to the city without being spotted. Besides the whole slope of the mountain, there are two special vantage points. [1] is a high building in EU main base [I]. [2] is a concrete bunker. Part of PAC main base [II] and initially neutral spawn point can be observed from there. European Union have not got vehicles in their main spawn, PAC have one battlewalker T-39 Bogatyr and a recon vehicle.

Strategy for EU: First of all - teamplay. Forming squads, resupplying and healing other teammates are really essential on Cerbere Landing. The team should concentrate on the southern, initially neutral and EU eastern spawn (it's a church).These points are going to be attacked first and guys from PAC will throw into the battle everything they have, including battlewalker, so prepare for eventual meeting with that machine. I advise to place a lot of SLSB's near menaced flags. Also, keep an eye on the map, because enemy sometimes tries to get through to northern spawn points unnoticed. To prevent your rival from doing it, place SLSB in the north. APM bombs would be a nice idea too. If the enemy takes on of the spawns and performs a strong defense, a good sniper can use the terrain geometry and try to kill a few opponents near the flag. In the end of the round, EU defense should be adjusted to PAC playing style. If rival prefers frontal attack, then European soldiers have to fight with him in a way described above. Nevertheless, if PAC likes actions behind enemy lines, it is necessary to move some of the troops to the northern premises and to fight for lost flags.

Strategy for PAC: Difficult map for the PAC team. There are two ways of attacking the village in the north. First and harder one leads to the initially neutral flag, which must be taken and defended. Only a large group of units, including battlewalker T-39 Bogatyr, can do it. Enemy attacks from a higher position and that's why he can surround the neutral flag, so holding it is not a walk in the park. The second way leads through the forest, it has been marked with a green oval on the map above. EU, in fact, doesn't pay much attention to it, but if you capture the eastern flag (church), the enemy will launch strong counterattack. Church is an important point, because controlling it allows team to attack other flags really swiftly. If PAC manages to control the initially neutral flag and the church, further expansion to the north won't be a big problem. Nevertheless, if the task of capturing these two points would be too difficult, it is also possible to steal through the city in order to capture flags in the northern part of the map. Battlewalker can be useful only while assaulting that initially neutral flag and the church. Premises are too narrow for Bogatyr, machine cannot fight well against enemy troops in this region.