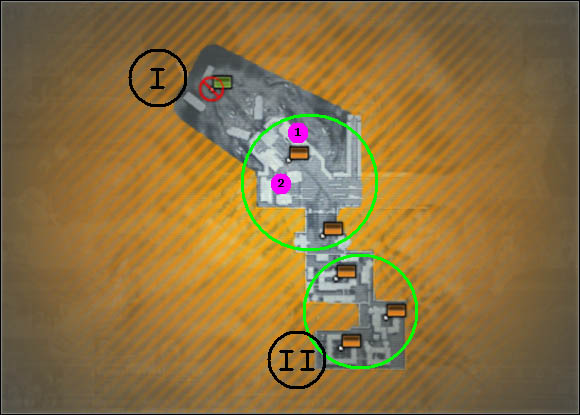 Map description: Camp Gibraltar is a close combat map; we have got here a lot of buildings surrounded by high walls. Northern part is an extensive train yard and the southern one is filled with structures, where infantry fights dominate. Terrain is flat, but plenty of obstacles make maneuvering really difficult. Anyway, there are not so many heavy vehicles on this map; it is mainly an infantry battle. The most popular kits here are Recon (sniper specialization) and Assault. Because amount of machines is small, it is a necessary to go on foot, which takes some time, especially when going from one end of the map to another.

Analysis: Big green circle marks the region where the first fight takes place. Lengths among buildings and other objects are long, so it is possible to use a battlewalker in that terrain. Moreover, snipers dominate in that area. In addition, two flags in there can be taken while being in a vehicle. Green circle in the south marks three spawn points, which can be captured by infantry only, battlewalkers are almost completely useless in that region. For sharpshooters, Camp Gibraltar is a real paradise - whole terrain is surrounded by a high wall with accessible top, which is an extremely good vantage point. There are also points [1] and [2]. These are structures from roofs of which it is possible to observe the nearby flag. In addition, throwing grenades from these buildings could bring a lot of frags. Points [I] and [II] are main bases of both sides. PAC has got a battlewalker and a recon vehicle, while EU has got battlewalker only.

Strategy for EU: Strong defense in the northern part is essential, the team mustn't allow enemy to get deep into the camp, because that will end with loss of the main base and the necessity of launching a counterattack. Anti-personnel weapons of all kinds are recommended, especially APM. Commander should attack groups of enemy infantry with orbital strike and support his own soldiers with constant supply drops. If the enemy manages to capture one of the southern flags, a group of infantry should be sent in there to take it back. Machines are unable to fight there, that is why single soldiers have to fight in that region. I advise to avoid dispersion, because it leads to inefficient work and the enemy will constantly capture flags in the south, and that makes overrunning him nearly impossible.

Strategy for PAC: First of all, EU main base, or any other flag in the south, has to be captured. Ocelot filled with infantry should drive through the train yard, under enemies' noses. Once the vehicle get to the southern part, soldiers has to take as many spawn points as they can. This'll do the job, with additional flags, battle won't be difficult. Battlewalker can be used only in the northern part, while attacking the first flag on its way. There are too many Rosch Mk-S8 stationary weapons in the southern part and, besides, that machine is completely useless in there. After capturing the EU main base, the team has to attack other flags in a traditional way. I advise to form medium and big squads. A lot of obstacles provides really good cover and allows efficient fight in the centre of the camp.