On this page of our game guide to Batman: Arkham Knight we explain how to infiltrate the first airship. Main hero has to solve a few riddles, including a riddle with remote hacking device. 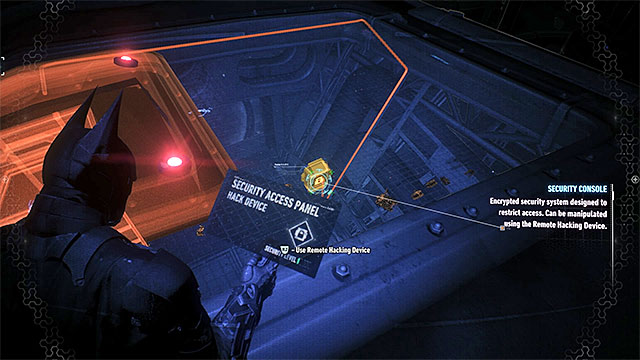 Activate the detective mode and hack the terminal.

Before you try to get on board of one of the airships, listen to a conversation with Alfred and with Lucius Fox. Head to Wayne International Plaza. Reach one of the top balconies, locate a scanner in the wall and take the Remote Hacking Device.

You can now approach the edge and glide towards the airship. Reach the entrance and you will notice that it is closed. Activate detective mode and locate the control panel. Choose Remote Hacking Device from the inventory and use it on the terminal. To hack the system, you need to guess the password by moving the analog sticks or the keyboard and mouse. The password is BIOCHEMISTRY. Now, you can open the entrance. 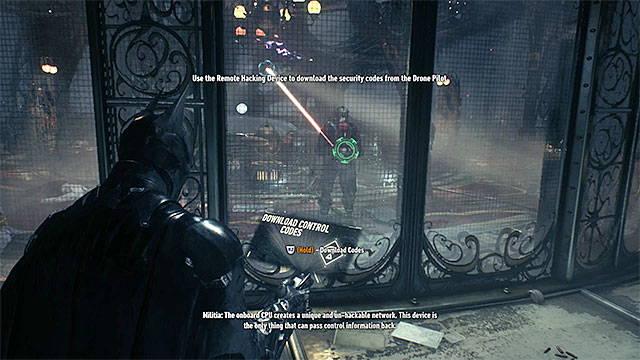 Steal the code from the drone operator.

Go through the ventilation shaft, jump down and stand near the close door that separate Batman from the three thugs. You will have an opportunity to test the Remote Hacking Device. Aim at the drone operator and hold the appropriate key/button to download the code. Take control of the drone and order it to attack the enemies. This time, you will be able to neutralize all the enemies at once, but later in the game, a drone will be only be able to deal with opponents near it.

Try to open the door. You will fail, so use the Remote Hacking Device on the control panel to the let (password: PROTEINS). Enter the large hall and listen to a conversation with Alfred. 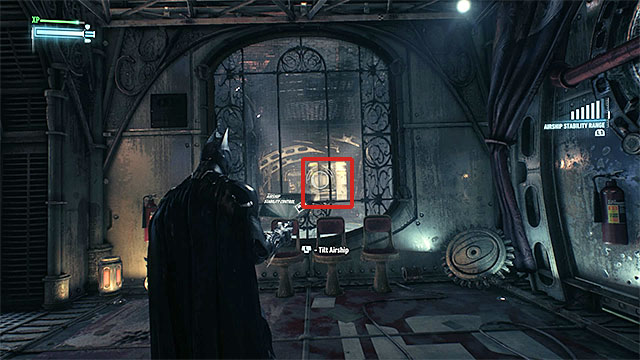 Tilt the airship to move the crate.

Go to the room where you can see a terminal. Hack the terminal to take control of the airship's stabilizers and to be able to tilt the airship. Use this function now - you need to get rid of the large crate to unlock the passage in the floor. Head to the hatch and use it. 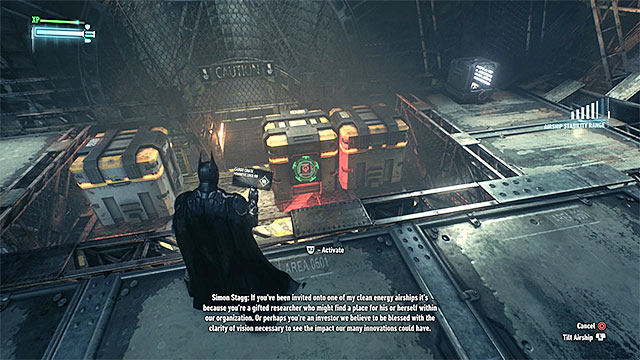 Head straight and stop in the room with three new crates. First, move the crates to the right maximally. Select the Remote Hacking Device and aim at the crate in the middle (shown in the picture above) and move its magnetic lock. This will block it in current position. Now, tilt the airship the other way and the crate on the left will move, which will unlock the passage.

Go to the end of the corridor, look up and use the grapnel on the interactive hatch. Here, you will have to fight an elite enemy, who is wielding a blade. When he starts to attack you, move the analog stick down (or press the down directional key) and hold the key/button responsible for counterattack. Start attacking only after he finishes his combo. 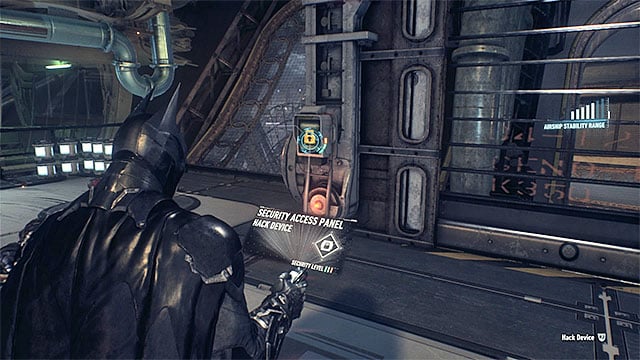 Hack the panel to open the airship side door.

Hack the nearby panel using the Remote Hacking Device (password: ELEMENTS) and enter the main area in the airship, where there are twenty thugs. Attack them from above and start the battle. Surprisingly, winning this fight should not be a problem. Beside one brute (use Beatdown on him), all the enemies are in their weakest forms.

After the battle, talk to Simon Stagg. You will soon experience some reality disturbances - attack the enemies that rise up from the ground. Be prepared to quickly press the attack key/button to get out of Joker's clasp. After regaining consciousness, use the Remote Hacking Device to hack the panel (password: NUCLEICACIDS). Make an attempt on jumping onto the next airship, which will fail.