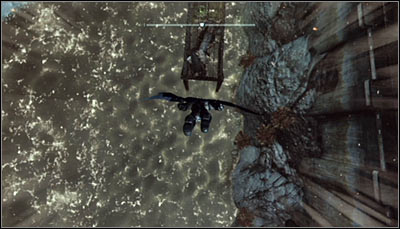 How to complete: It's a very simple challenge, as in order not to land too early, you need to alternate between using the Dive bomb (holding the right trigger; screen above) and ascending (leaning the left analog stick down). Just look out not to hit anything on your way.

How to complete: Curiously, you don't have to use the Boost at all, as you can pretty much just use the tactic described in Challenge #1. If you however plan on using it (by tapping A twice and holding it down after the second one), remember not to hit anything after catapulting Batman (ledges, buildings etc..

CHALLENGE 3 - Perform a vertical dive for over 50 meters

How to complete: The challenge of course corresponds to the Dive Bomb, activated by pressing the right trigger in mid-air. In order to make sure that you can complete this challenge, choose a roof of a very tall building, like the Church or Gotham Bank.

How to complete: You can approach this challenge only after obtaining the Line Launcher. The assumptions of this challenge aren't very complicated, as you have probably come across the need to change direction multiple times throughout the story mode. Just remember to constantly use the ability to slow down (left rigger). I'd also recommend completing this in either Park Row or the Bowery, as you will have an easier time moving between the building. 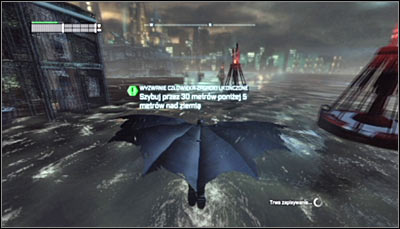 How to complete: You should approach this challenge in the Industrial District. Start off by using the Dive Bomb (hold down the right trigger in mid-air) and flatten out at the very last moment (by pulling the left analog stick back). Now just fly right above the water (screen above) and you should complete the required 30 meters without any problems.

How to complete: It's a pretty simple challenge. Remember not to take any longer breaks between the attacks. The multiplier can be also easily increased by using the Beat Down skill, that is first stunning the enemy with the cloak (B) and afterwards attacking him by tapping X.

CHALLENGE 7 - Use 3 Quickfire gadgets in one combat encounter

How to complete: The Quickfire is offered by, inter alia, Batclaw, Batarang, Batarang, Remote Electrical Charge or Freeze Blast. It's important to use the shortcut each time (e.g. left trigger + B with the Electrical Charge), so without the process of manually aiming. It's also worth to complete this challenge during a fight with a large enough group of inmates, so that you don't run out of enemies before using the required amount of gadgets.

CHALLENGE 8 - Achieve a x5 variation bonus in one combat encounter

How to complete: This challenge shouldn't be especially hard. Start the fight with an aerial attack and during the fight itself lead out different attack types (Stun, Beat down etc.), not just the standard types and counters.

How to complete: This challenge is easier than it might seem. Start off by stunning an enemy with the cloak (B) and afterwards press A twice to run onto him. Don't wait for Batman to jump above him, but quickly lean out the analog stick towards a different enemy and press X. as a result Batman should bounce off the first enemy and attack the next one. Perform this attack two more times.

CHALLENGE 10 - Use the Slide to trip an enemy (3 required)

How to complete: This trivial challenge can be completed in a matter or second. Start running at an enemy and press the right trigger to slide and trip him. Repeat this attack two more times.

How to complete: Completing this challenge isn't very hard. During the fight, attack every enemy but one, leaving him for the end. Once he's the only one left, stun him with the cloak (B) and afterwards start tapping X, activating the Beat down. Repeat this four more times. 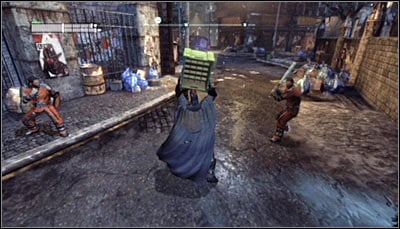 How to complete: The challenge doesn't correspond to the bullets fired from gun, but to items that the inmates throw at Batman (e.g. small crates). Each time you note such an enemy, wait for a counter icon to appear above the thrown item and press Y. Batman should grab the item (screen above) and throw it back. Repeat this two more times. 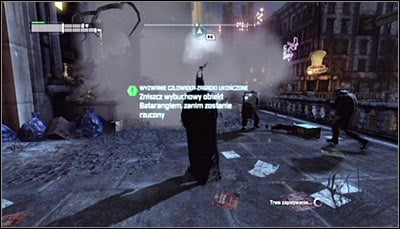 How to complete: You shouldn't have problems here. You need to fight a group of inmates, in which one will try to throw a fire-extinguisher or a different explosive item at Batman. When you note that someone is holding an explosive item, throw a Batarang at him (Quickfire, or manually aiming at him) to cause a premature explosion (screen above). 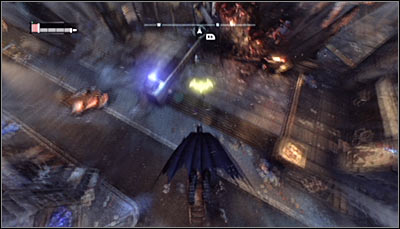 How to complete: You will need to have the Glide Boost Attack upgrade to complete this challenge. Start on a vantage points or a roof, nearby a big group of enemies. Glide towards at least two standing beside each other, at first pressing X to aim at one of the inmates and afterwards the right trigger. A yellow icon should appear above the inmate and start filling up (screen above). The icon must start glowing red, thanks to which the force will knock down both enemies.

CHALLENGE 15 - Use a Combo Batarang in combat (10 required)

How to complete: This simple challenge implies using the Batarang by tapping the left trigger (without aiming). Do this move nine more time. 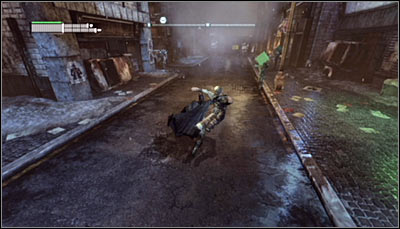 How to complete: Completing this challenge requires the Batclaw Slam upgrade. Aim at any enemy and afterwards press the left trigger and Y at the same time. It's however not the end, as after a given enemy get pulled towards Batman, you need to hit him by pressing X (screen above). Repeat this four more times.

How to complete: You can approach this challenge after obtaining the Remote Electrical Charge. The Quickfire shortcut for this gadget is left trigger + B. It of course cannot be the only attack in the combo, so perform at least one normal attack after using the gadget. Repeat this four more times.

How to complete: The Quickfire shortcut is left trigger + X. of course after planting the charges you need to detonate them at the right moment, so that you hit the enemies. You also need to make sure that it's not the only attack in the combo. Repeat this four more times.

How to complete: You can approach this challenge only after unlocking the Freeze Blast. The Quickfire shortcut for hits gadget is tapping the right trigger twice. You of course need to make sure that it's not the only attack, so attack at least one after using the gadget. Repeat this four more times. 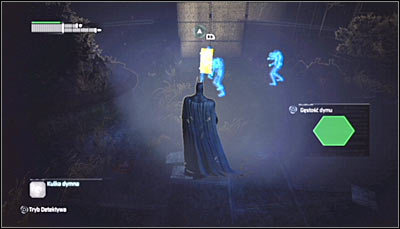 How to complete: This challenge is best approached in a rather small room, surrounded by a big group of enemies. Press Y to let out a smoke pellet and start running through the smoke hoping that one of the enemies will try to attack you and hit his buddy instead. Luckily, it's much easier than it sounds.

CHALLENGE 21 - Finish a fight with a Combo Batarang (3 required)

How to complete: It's a very simple challenge, requiring you only to knock out the last enemy in a group with the Batarang. If the first Batarang attack causes him only to fall down, wait until he gets up and try again. Repeat this two more times.

How to complete: Stand beside any group of armed enemies and make Batman doesn't get noticed by them. Aim at one of the enemies with the Remote Electrical Charge and shoot at him. The challenge will be completed if there as at least one other inmate beside him. 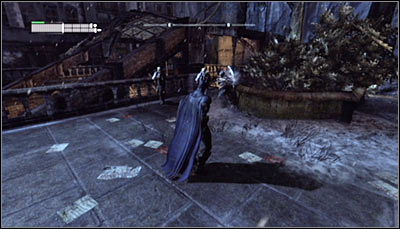 How to complete: Start by locating a group of enemies with at least one equipped with a stun stick. You can either shoot him from above or fight the group directly, focusing your attention of that one enemy (screen above). In the latter case, you should of course use the Quickfire option (left trigger + B). Repeat this two more times.