Stand on the ledge north of the Trophy's location. If you zoom in, you should note that the Trophy is inside a cage #1 and that in order to open it, you will have to break into the local security system. Equip the Cryptographic Sequencer and use it to remotely hack the control panel behind the fence #2.

Begin the hacking mini-game and create the password #1. Afterwards grab the Trophy hanging from the wall with the Batclaw #2.

Approach the Trophy from the west and you should note that it's hidden beneath a building #1. Stand in front of the small hole, gain momentum and slide underneath it #2, thanks to which you will be able to collect it.

Start off east of the Trophy's location. Equip the Remote Electrical Charge, approach the large gate and send a charge towards the engine built into the floor #1. Afterwards head west and collect the Trophy #2. Notice! Stay cautious, as while leaving this location you can get unexpectedly attacked by an assassin.

Head to the area where the Trophy is hidden and stand by the western ledge #1. Equip the Freeze Blast and use it to create an ice raft, onto which you of course need to jump #2.

After landing on the ice, turn around and make sure you're west of the secret #1. Prepare the Grapnel Gun and aim at the red ledge in the distance (zoom in if you're having troubles locating it) #2.

Right after you launch off, use the Grapnel Boost by pressing A twice (and holding down the button after the second time). That way you will gain more speed by catapulting Batman and as a result he will break through a fragment of the ceiling #1 in which the Trophy was hidden. Wait for Batman to land and use the Batclaw to grab the Trophy #2.

Search for a control panel nearby the Trophy's location and hack it with the Cryptographic Sequencer #1. Complete the mini-game by creating the password #2. Afterwards collect the Trophy.

The Trophy is on a small ledge which you come across during one of the main story missions, Gain access to Wonder Tower to be precise. If you didn't pick up the Trophy on the first run, use the below description. Start off standing beside the ledge, west of the Trophy's location #1. Take out the Line Launcher and shoot at the southern wall #2.

Right after the ride starts, hold down the left trigger to slow down as you will have to change direction. Turn the camera left and shoot at the ledge north-east from your current location #1. After reaching it, pick up the Trophy #2.

Collecting this Trophy is unfortunately rather hard, as it implies performing a few not very obvious actions. Start off east of the Trophy's location, beside the secret tunnel entrance #1 #2. As a reminder, this corridor becomes unlocked for the first time during Locate the secret entrance using the video data.

Head west, but don't turn right at once. Instead, blow up the wall with the Explosive Gel #1. You will find a Trophy cage and establish that in order to open it, you will have to deactivate the interactive question mark to which the cable is going #2.

Turn around, equip the Remote Controlled Batarang and throw it #1, causing it to fly out of the secret passage. Afterwards turn it right, towards the south-west. It should not fly towards the passage between the buildings #2.

After reaching the street lamp, turn the Batarang slightly right #1 and afterwards a bit more sharply. Eventually the Batarang should be flying towards the north #2.

You need to lead it into hitting the interactive question mark #1. It can be found directly west of the Trophy #2, separated from the cage with a wall. Turn around once again and collect the Trophy.

Soon after using the elevator to the upper levels of the Wonder Tower, you will have to go round the whole construction using the cornices #1. Move north using this method and afterwards west #2, WITHOUT jumping onto the ledge following which you could continue the climb.

Soon you should find yourself by the western wall of the building and here you need to move south #1. It will let you reach a small ledge with the Trophy on it #2. Curiously, the ledge adjoins the observation platform reached after getting out of the elevator.

Take some time to familiarize yourself with the situation. The Trophy is inside a cage in a small room #1, which opens each time you get out. Therefore, you will have to grab the Trophy from afar. Start off by spraying Explosive Gel onto the window in this room #2.

Get out of the room and head west, stopping after reaching the ledge #1. Shoot a line towards the western wall. Right after beginning the ride, press the left trigger to slow things down. Turn the camera right and be ready to change direction, aiming at the small northern platform (not into the big hole inside of which enemies were) #2.

Eventually you should reach a platform north-west of the Trophy's location #1 #2. 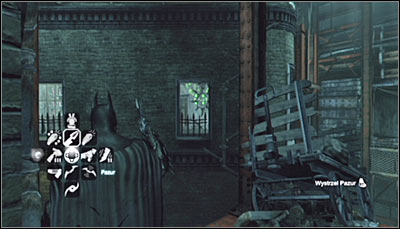 Turn south-east, i.e. towards the Trophy. Equip the Batclaw and use it to grab the secret (screen above), using the window destroyed by the explosion. 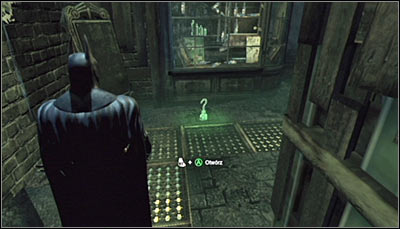 Explore the south-east corner of the Wonder Tower Foundation, its lowest level to be precise. The Trophy can be found by one of the shafts built into the floor (screen above).

Start off by reaching the small ledge located east of the Trophy's location #1. Afterwards turn west, take out the Batarang and use it to hit the Trophy hanging from the line #2.

Upon getting hit by the Batarang, the Trophy will fall down into the water. Equip the Freeze Blast and create an ice float beside it #1. Now just glide there and collect your prize #2.

Examine the western wall, finding a spot where you can spray the Explosive Gel using the Detective Mode #1. Detonate the charge and collect the Trophy #2.

You need to start climbing the Wonder Tower, eventually reaching the spot where you use the Grapnel Gun to get onto the metal construction #1. Head towards the northern wall of the building and you should be able to find the Trophy without much problems #2.