Stand east of the Trophy, look up and use the Grapnel Gun to reach the upper ledge #1. Pick up the Trophy #2.

Start off by the ledge, south-east of where the Trophy is #1. Shoot a line towards the western wall. Right after the ride begins, hold down the left trigger to slow down the process. Turn the camera right and be ready to change direction, aiming at the small platform in the north (not into the big hole, where enemies have been) #2.

Eventually you should reach a platform east of the Trophy's location #1 #2.

Take a look around the western wall and you should note a hole which you can grab with the Grapnel Gun #1. After reaching the small room, examine the ceiling. Use the Batclaw to grab the collectible #2.

Examine the eastern wall, finding a place where you can spray the Explosive Gel with the Detective Mode #1. Detonate the charge and collect the Trophy #2.

The Trophy is found inside a cage #1 and in order to open it you need to throw a Batarang into the question mark above you #2. Notice! If there's a destructible wall here, it means that you came for this Trophy too early. In such situation, wait until you complete Gain access to Wonder Tower, as during it Batman will break through the wall into the library. 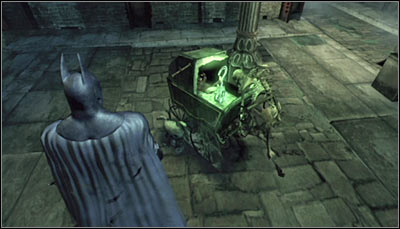 The Trophy is hidden inside the pram (screen above) left beside the street lamp.

Approach the Trophy from the north. Equip the Freeze Blast and look up to locate two pipes that you can seal #1 #2.

Sealing the pipes will let you access the upper ledge, so grab the ledge with the Grapnel Gun #1. After reaching the destination, collect the Trophy #2.

The Trophy in the water, so stand beside the lower ledge, equip the Freeze Blast and use it to create an ice raft #1. Afterwards glide there. If you have created the ice right next to the Trophy, you will be able to collect it at once #2. Otherwise, help yourself with the Batclaw by using it on the grapple points.

Stand by the ledge north of the Trophy #1. Equip the Freeze Blast an use it to create an ice raft, as close to the southern wall as possible #2.

Now you of course need to glide towards the ice raft #1. After landing on it, look up and grab the Trophy attached to the balcony #2 using the Batclaw.

Take a look around north of the Trophy to find an upper ledge which you can grab with the Grapnel Gun #1. After getting upstairs #2, it will turn out that in order to obtain the Trophy, you have to activate three pressure plates without touching any other environment elements or the ground.

Start off by standing on the pressure plate beside the cage #1. Equip the Line Launcher and shoot at the northern wall #2, as that's where the second pressure plate is.

Start riding the line, but be ready for letting go at the proper moment, so that Batman perfectly land on the second plate #1. You can't do it too late or too fast, as otherwise you will have to begin the whole procedure from the beginning. Turn west and shoot at the wall located behind the third pressure plate #2.

Just like before, you need to perfectly choose the moment to let go of the line #1. If you make it, all three pressure plats should switch off. Return to the starting point to collect you prize #2.

Start off south-east of the Trophy's location, beside the secret tunnel entrance to be precise #1. As a reminder, you unlock this corridor for the first time during Locate the secret entrance using the video data. Head west and afterwards north, stopping after reaching the blocked passage #2.

Take out the Disruptor and use it to detonate the proximity mine on the ground #1. Only afterwards perform a slide #2, thanks to which you will reach the area where the Trophy is\.

Stand by the ledge north-east of the Trophy #1 #2. Equip the Line Launcher.

Fire a line at the western wall in the distance #1. Right after you begin the ride, hold down the left trigger to slow down. Turn the camera left and be ready to change the direction, aiming at the small southern ledge on which the Trophy is #2. Land on it and pick up the collectible.

Approach the Trophy from the north, using one of the barrow balconies to reach a locked door. Equip the Cryptographic Sequencer and use it on the control panel on the left #1. Solve the mini-game by creating the password #2.

Now open the door and go down the stairs #1. Look up and use the Batclaw to grab the Trophy hanging from the ceiling #2.