The Trophy is found in an normally inaccessible room of the Steel Mill, so as a result a strict cooperation of Catwoman and Batman is required here. You can perform the required actions while obtaining Batman's Trophies #16 and #21. Playing as the Bat, head to the main room of the Loading Bay, north of where the Trophy is. Equip the Remote Electrical Charge and aim at the engine in the middle of the room #1. Start alternating between pressing RB and the right trigger, sending out different charges and setting the big hook into motion #2.

You need to swing the hook enough for it to destroy the big fan on the southern wall #1. Afterwards switch to Catwoman and head to the tunnel unlocked thanks to the hook #2.

Head south and afterwards turn west, jumping into the hole you come across #1. Stand by the ledge and use the Ceiling Climb skill by pressing RB to stick onto the ceiling#2.

Head west #1, remembering not to jump anywhere. After a few moment you should reach the place where the Trophy has been hidden #2.

A locked gate guards access to the Trophy. As Catwoman can't hack into control panels, Batman has to do it for her with the Cryptographic Sequencer #1. It's best to do it while collecting Batman's Trophy #11. Change to Catwoman and collect the Trophy #2. 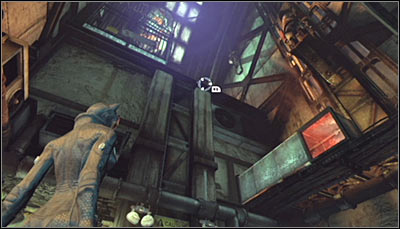 Start off in the Assembly Line room, standing south of the Trophy. Look up and search for a ledge which you can reach (screen above).

After getting onto the upper ledge, approach the interactive grate just beside #1. Press the right trigger and the A button at once to open it and therefore use the Ceiling Climb skill #2.

Head towards the second grate and after getting there #1 press A. Doing so should result in finding yourself right beside the Trophy #2.

Take a look around for the Trophy which is attached to the balcony #1. Stand there and use the Ceiling Climb ability by pressing RB to stick onto the ceiling #2. Afterwards collect the Trophy.

After reaching the area where the Trophy is hidden, stop on the bridge #1. Approach the ledge and press A to lower yourself #2.

Now use the Ceiling Climb skill by pressing the right trigger. It should result in Catwoman sticking onto the bridge #1. Now you just need to approach the Trophy and collect it #2.