The Trophy can be found below a big bridge #1. After getting there, use the Ceiling Climb ability by pressing RB to stick onto the bridge. Now you just need to approach the Trophy #2.

The Trophy is found in a normally inaccessible area, so as a result Catwoman and Batman will have to cooperate. You can perform the needed actions while obtaining Batman's Trophy #20. Playing as the Bat, stand on one of the higher platforms directly west of where Catwoman's Trophy is #1. Turn on the Detective Mode, thanks to which you should note that you can destroy the nearby wooden wall #2.

Use the Line Launcher for that, shooting at the wall and destroying it upon contact #1. Afterwards you can switch to Catwoman and reach the area unlocked by Batman #2.

Look up #1 and use the Ceiling Climb ability by pressing RB to stick onto the steel construction. Afterwards stand on the grate and press A #2. It will let you reach the Trophy. 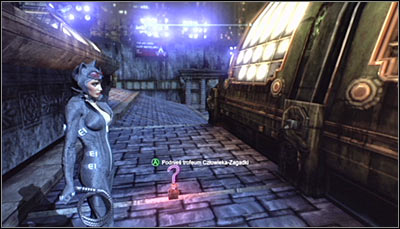 This Trophy can be reached very easily. Get onto the roof of the Museum and look around to find the collectible (screen above).

Start off on the balcony north-west of where the Trophy is #1 #2.

Jump onto the southernmost balcony, grabbing the balustrade #1. Afterwards you just need to climb and pick up the Trophy #2. 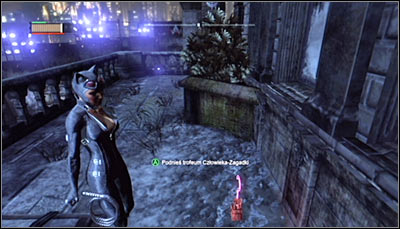 This Trophy can be reached very easily. It can be found on the roof of the building (screen above).