Use the northern stairs leading to the station and look for a ventilation shaft grate after getting there #1. Pull out the grate, enter the shaft and find the Trophy inside a small room below the stairs #2.

Start off directly east of the Trophy's location, standing on the roof of one of the cars #1. Head west and afterwards jump down #2 to find the Trophy.

Approach the Trophy from the eastern side. Turn on the Detective Mode and examine the area above the stairs (the main room of the station) to note that there's a destructible wall #1. Use the Grapnel Gun to reach one of the vantage points located east from here #2.

The solution of this puzzle is fairly easy, as you just need to glide into the fragile wall #1. It should get destroyed as Batman hits it, thanks to which you will be able to obtain the Trophy #2.

Take some time to familiarize yourself with the situation. The Trophy is inside a locked room adjacent to the stairs #1 and in order to reach it you will have to destroy the fuse box #2. 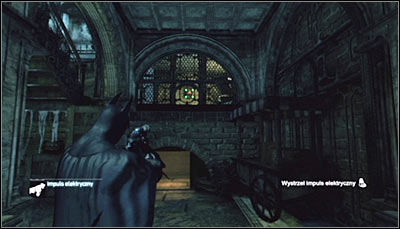 Go down and approach the Trophy location from the east. Take out the Remote Electrical Charge and stand so that you're able to hit the by sending a charge through the small hole (screen above). Afterwards return up and collect the Trophy.

Start off south-west of where the Trophy is. Stop by the partially flooded part of the tunnel #1 and equip the Line Launcher. Shoot a line at the northern wall #2 and start riding it.

I'd definitely suggest holding down the left trigger to slow down, as soon afterwards you will have to change direction. Be ready to shoot a new line into the eastern wall #1. Wait for Batman to reach the new ledge and pick up the Trophy #2.

After reaching the area where the Trophy is hidden, you should note that it's behind a locked gate #1. The only way to get past is destroying the fuse box in the distance #2.

Head south, stopping beside the eastern subway tunnels exit #1. Turn west and you should note electrical discharges in the distance #2. Equip the Remote Controlled Batarang.

Throw the Batarang into the discharges #1, and turn it around towards Batman right after it gets electrified #2. The easiest way to do it is by pressing the left and right trigger at the same time.

Now guide the electrifies Batarang north, towards the Trophy #1. After reaching the previously mentioned gate, make the Batarang fly through the small hole #2.

Now you just need to direct the Batarang into the fuse box #1. After destroying it go north yourself, use the newly unlocked passage and collect the Trophy #2.

Examine the upper level of the subway station to find a room in the south-east corner into which you can break #1. Choose the Cryptographic Sequencer and use it on the control panel on the right #2.

Solve the mini-game by creating the proper password #1 and enter the room to collect the Trophy #2.

Start off south-east of the Trophy location and follow the partially collapsed passage leading north #1 #2.

Now turn west #1. After reaching the Trophy cage stand on the pressure plate #2. By doing so you will cause three interactive question marks to activate and which you will have to deactivate again. Equip the Remote Controlled Batarang.

Make sure that you are facing west, throw the Batarang and make it fly into the nearest car #1. Ignore the two question marks that you will come across and direct the Batarang into the one found in the last car #2. Note that by hitting it you have also activated a timer, meaning that from now you will have to hurry.

Quickly throw another Batarang, directing it into the middle question mark #1. Throughout the flight it's worth to press the right trigger to make the Batarang fly faster. Leave the closest question mark for the end. If you destroy all the question marks in time, you will be able to collect the Trophy #2.

You can't approach this from the north, as you would come across a locked gate. Instead, take a look around south-west of it behind the stairs #1. Go down the stairs and pick up the Trophy #2.

Approach the Trophy from the west. Stand beside the locked gate #1, choose the Remote Electrical Charge and shoot at the engine above you. Now gain momentum and slide underneath the partially raised gate #2 which will let you reach the Trophy room.

Start off on the lower platform in the waterfalls room #1. Climb one of the balustrades, equip the Freeze Blast and shoot at the water beneath you #2.

Wait for an ice float to form #1 and carefully jump down onto it. Take a look around and you should note that there's a Trophy attached to the western wall #2. Use the Claw to grab it.