The Trophy can be found below the balcony #1 and even though obtaining it won't be difficult, you should look out not to fall into the water. Get onto the upper part of the mentioned balcony and climb up onto the balustrade #2.

Carefully lower yourself #1 and use the Ceiling Climb skill by pressing RB. It should result in Catwoman to stick onto the balcony #2. All you have to do now is approach the Trophy and collect it.

The Trophy can be found in the room inside the tower and reaching it requires the cooperation of Batman and Catwoman. Playing as the Bat, locate a destructible wooden wall #1. You can get rid of it in a couple ways. One of them is gliding off one of the higher buildings to hit the wall. I'd recommend a faster method, assuming standing north-west of the objective and using the Line Launcher #2. The Line should break through the wall. It's best to do it while collecting Trophy #2 for Batman.

Now you can switch to Catwoman, return to the area #1 and jump inside #2. Here you should note that in order to open the Trophy cage you have to activate three pressure plates, though without touching any other elements of the floor.

Stand on the first pressure plate #1 and afterwards use the Ceiling Climb skill by pressing RB #2.

Move along the ceiling and stop above the second pressure plate #1. Let go and land on the plate #2.

Now you need to repeat the above actions with the third plate, so "stick" to the ceiling and reach a spot from which you will be able to jump down onto the pressure plate #1. Now you can use the well-known way to reach the Trophy cage #2.

The Trophy is on the roof, guarded by armed enemies #1. It's worth to use Thief Vision #2, activated by pressing LB, to locate them. I'd suggest using silent takedowns and the left trigger + Y in case Catwoman is detected, thanks to which you can knock out guns out of enemies' hands.

After clearing the roof, stand beside the fence #1. You will have to use the Ceiling Climb skill, so press RB to stick onto the fence. Now you just need to approach the Trophy and collect it #2.

Approach the Trophy from the north #1 #2 and find a small passage.

The Trophy is beside a small fence, on the other side of which there's a statue of a seal with a balloon #1. You have to use the Ceiling Climb skill by pressing RB #2 and collect the Trophy afterwards. 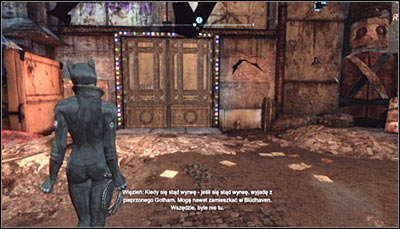 The Trophy inside the Storage Warehouse 5B where you must head after completing Batman's side mission Heart of Ice. Use the main door leading into the building (screen above).

After getting inside the biggest room of the Warehouse, jump into the shaft in the floor #1. Follow it until you reach the opposite exit #2.

Jump down into the little room and look up to find the Trophy, attached to the ceiling #1. You have to use the Ceiling Climb skill here by pressing the RB button #2. Collect the Trophy.