The Trophy is hidden below the bridge leading to Poison Ivy's estate #1. Start off by getting to the area and stand south-east of the secret, below the stairs to be precise #2.

Now press RB to stick onto the bottom of the bridge #1. Approach the Trophy and collect it #2.

The Trophy can be found below the highway and it would be best to start on one of the lower level, south-east of its whereabouts #1 #2.

Press RB to stick onto the road #1. Now you just need to reach the spot where the Trophy is #2.

After reaching the area where the Trophy is hidden, it will turn out that the passage leading towards it is blocked #1. As Catwoman is incapable of destroying walls, Batman will have to do it for her by using the Explosive Gel #2. After the wall is done with, return there and collect the Trophy.

Obtaining this Trophy requires strict Batman-Catwoman coordination. First, you will have to access the underground police station and that's a job for Batman. You can do it while solving riddle #5 or obtaining Batman's Trophy #5. Start off north of the underground parking lot, standing on the edge of the GCPD building roof #1 #2.

Glide south, towards the wooden wall nearby the water #1. Batman should automatically break through the wall upon hitting it #2.

Now you can switch to Catwoman and use the hole in the wall created by Batman #1 to reach the underground parking lot #2.

Now press RB to stick onto the ceiling #1. Head south, going above the water. Let go only after reaching the southern part of the parking lot. The Trophy is on the barrel #2.

In order to obtain the Trophy, you will have to enter the Krank Co. Toys building #1. Inside, head to the room where the canisters collected by Bane where stored #2. It's worth to notice that you can do it only after completing one of Batman's side missions, i.e. Fragile Alliance. 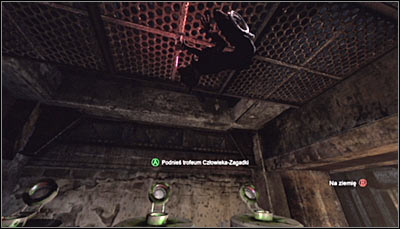 Use Ceiling Climb skill by pressing RB and collect the Trophy (screen above).