Turn on the Detective Mode thanks to which you will note that you can destroy the wooden wall with the Explosive Gel #1. Afterwards pick up the Trophy #2. 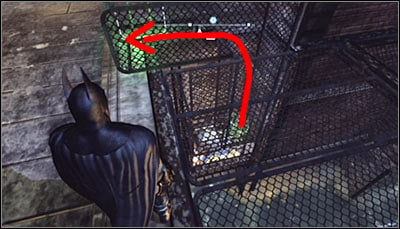 Try landing on the roof of the metal construction. The idea behind this puzzle is pushing down the sphere with the Trophy into the hole found on this level (screen above).

Head north #1 and jump onto the lower platform. Turn north and you should end up opposite to a small water tank #2.

Equip the Freeze Blast and create an ice raft #1, making sure that it's as close to the wall in the distance as possible. Afterwards use the Line Launcher to safely reach the ice float #2.

Land on it and equip the Remote Electrical Charge. Aim at the electromagnet above you #1. Sending a charge into it will result in pushing the ball into the hole mentioned before (i.e. up and afterwards left) #2.

Now you need to return to the starting point, so use the Line Launcher #1 and afterwards the Claw. Approach the hole #2 and collect the Trophy from the sphere.

In order to reach the Trophy you have to jump off the highway and land on the small platform beside the water #1. Stand on the pressure plate and turn towards the interactive question marks to the west #2.

Take out the Remote Controlled Batarang and throw it at the middle question mark #1. Things will get more complicated from here on, as the other two question marks are hidden behind pillars and additionally a timer will start. Quickly throw another RCB. It's worth to press the right trigger to increase its speed during the flight. Steer into one of the side question marks #2.

Immediately throw the last Remote Controlled Batarang and make it hit the third question mark #1. Switching off them all will cause the Trophy cage to open #2.

Start off by standing west of the Gotham City Olympus building #1 #2.

Aim at the balcony below the neon sign and use the Grapnel Gun to get there #1. Afterwards equip the Explosive Gel and destroy the wooden wall using it #2. Afterwards pick up the Trophy.

In order to find the Trophy you will have to reach the underground police station parking. Start off north of the destination, placing yourself by the edge of the roof #1. Glide south, towards the wooden wall beside the water #2.

Batman should automatically break through the wall upon hitting it #1. Pull up if necessary and afterwards turn right to find the Trophy #2.

The solution to this puzzle is quite complicated and it implies activating three pressure plates. The first plate is on the roof of the building located north of the Trophy #1 #2.

Jump off the edge and glide south. You need to head towards the pressure plate on the wall of the southern building #1. The key in this case is bouncing off the wall connected with activating the plate #2. In order to perform that action, you have to let go of A at the last moment and quickly press X. of course don't forget to press and hold down A again after Batman bounces off to start gliding again.

It's important to try and bounce off the plate in its upper part, thanks to which it will be easier to reach the next one. It's on the wall of the northern building #1, the one on which you started. Just like before, you have to let go of A at the right moment and press X #2.

That's the last plate, so after bouncing off the wall use the Grapnel Gun to reach the roof of the southern building #1. Keep in mind that you have to hurry with it, as a timer has started. Grab the Trophy right after reaching the roof #2.

The solution to this puzzle isn't quite obvious, so try to directly follow the hints given here. Note that the Trophy and the three pressure plates #1 are found in separate cages. In order to gain access to the secret you have to land on each plate without touching the ground. Start off by standing on any of the plates #2.

In order to safely leave the cage, you will have to use the Grapnel Boost. Aim at any object above you (e.g. the chimney or large crane #1) and after a standard press of RB additionally press A twice (and hold it down afterwards). If you have done everything correctly, Batman will not only get out of the cage, but will also get catapulted #2.

Start gliding above the cages in which the other two pressure plates are #1. Lower the altitude and try to safely land on one of them. It's worth to notice that you will have to restart the whole puzzle if you don't land perfectly on the plate and for example grab onto the fence #2. If you do though, it's important to let go of the fence and not climb it.

Repeat the above actions with the last, third plate. Catapult yourself #1 and after a dozen or so second of gliding, land safely on it. Afterwards you will be able to jump inside the cage in which the Trophy is #2.

Get inside the Morgue at the GCPD building #1. The Trophy is on one of the tables #2.

Stand somewhere above the tunnel leading to where the Trophy is hidden #1. Equip the Freeze Blast, create an ice float using it #2 and of course jump onto it.

Note that the access to the Trophy is protected by a turret #1. Equip the Disruptor and use it on the turret #2 so that it's incapable of attacking.

Now you will just have to swim for the Trophy. Use the Batclaw to grab onto the grapple points #1 (optionally, you can also use the Line Launcher). Jump onto the small ledge and pick up the Trophy #2.

After getting to the area you should note that the platform on which the Trophy is keeps turning from time to time, varying between blocking #1 and unblocking #2 access to the secret.

Start running towards the metal construction and perform as slide #1. You however need to coordinate it with the platform's motion, so that you can grab the Trophy during the slide #2.