Approach the Trophy from the north #1. It's blocked by a destructible wall. As Catwoman isn't capable of taking down walls, Batman will have to do it for her with the use of the Explosive Gel #2. It's best done while collecting Batman's Trophy #9.

After going through the destroyed wall, get onto the ceiling by press RB #1 and head for the Trophy #2.

Head to the interactive grate #1, press A to open it and collect the Trophy #2. 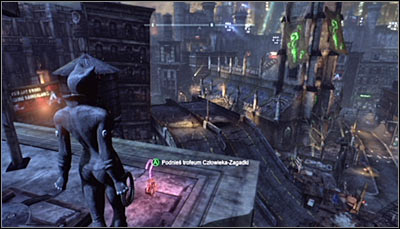 The Trophy can be found on the roof of the building, right beside the big billboard to be precise (screen above).

Find the big steel construction beside the place where the Trophy is hidden #1. Step inside and stand on the first, green pressure plate #2.

Now you have to press RB to stick onto the ceiling #1. Head forward and after reaching the other end press A to climb onto the ledge #2.

You should reach the upper balcony #1, press RB yet again there. Now just approach and collect the Trophy #2.

Approach the Trophy from the north #1 and climb the gate found there #2.

You now have to use the Ceiling Climb skill, so look up #1 and press RB to stick onto the ceiling. After wards approach the Trophy and collect it #2.