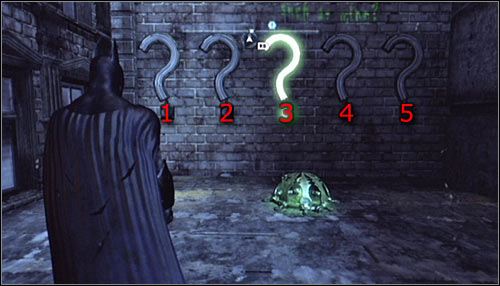 After reaching the area, note the five interactive question marks on the wall. They lit in a determined order: first, fourth, third, fifth, second. The order in which you hit them with the Batarang doesn't matter, you just need to feel the right moment. Notice! Turning a question mark doesn't cause the next one to activate faster. It of course makes the whole thing harder, as you need to pay more attention to throwing the Batarang at the proper time. In return for turning off all five question marks, you will be able to take the Trophy.

Take a look around where Jack Ryder is for a destructible wooden wall #1. Spray and detonate the Explosive Gel and you will be able to collect the Trophy #2.

Find the pressure plate nearby the Trophy cage and stand on it #1. Turn towards the Trophy and grab it using the Batclaw (you can't get off the plate, as it will cause the cage to close again) #2.

After reaching the area where the Trophy is hidden you should note that there are two proximity mines blocking the way to it. Use the Disruptor on each to detonate them #1. Afterwards pick up the Trophy #2.

After reaching the area where the Trophy is hidden you should note that there is a large horizontal gate blocking access to it #1. You can't unlock it in any ordinary manner, so look up and search for a vantage points marked with green #2. Reach it using the Batclaw.

The gate below you should open, though it's going to close a few moments after you leave the vantage point. Therefore it's important to fly perfectly down after jumping off #1, without hitting any obstacle on your way. After reaching the new location take a look around for a Trophy #2. Luckily collecting it will unlock the exit.

Locate stairs leading to the basement in the northern part of the building #1. Use them, but stop around the middle. Turn around, look up and use the Batclaw to grab the Trophy hanging from the wall #2.

After reaching the area where the Trophy is hidden you should note that it's blocked by a large horizontal gate #1. You can't open it in any ordinary manner, so look around the eastern building's roof for a pressure plate #2. Stand on it, of course.

The gate below you should open #1, though it's going to close again a few moments after you leave the plate. Therefore you should jump off, glide for a short moment and afterwards use the Dive Bomb by holding down the right trigger #2.

Batman should not only fly through the gate before it closes again, but also break through a floor fragment #1. Look around for the Trophy #2. Luckily collecting it will cause the exit to open.

After reaching the area, take some time to familiarize yourself with the puzzle. You will have to push the ball from the starting point #1 to the hole #2. It can be accomplished using as much as three electromagnets.

Equip the Remote Electrical Charge and start off by shooting at the lower magnet #1, the one beside which the ball is. Make the magnet push off the ball, causing it to move upwards #2.

It's important to quickly send a charge towards the second electromagnet found above the first one #1. Eventually both active magnets should cause the ball to fall into the horizontal tunnel #2 leading towards the "labyrinth" exit.

All you have to do now is interacting with the so far ignored, third magnet #1 found right beside the hole. Push the ball towards it and go there to take the Trophy out of the ball #2.

Locate the metal construction adjoining the church, enter it and stand on the green pressure plate #1. Equip the Line Launcher and shoot at the grate visible in the distance #2 which will let you avoid three red pressure plates.

Wait for Batman to land, turn around and use the Batclaw to grab onto the upper ledge #1. Here head forwards and take the Trophy from the open cage #2.

Stand on the roof of the building east of the Trophy, opposite to the ventilation shaft to be precise #1 #2.

Equip the Remote Controlled Batarang and throw it into the ventilation shaft #1. After taking control over the Batarang, be ready to turn right #2.

Make the Batarang fly through the whole shaft and hit the interactive question mark #1. Afterwards jump onto the neighbouring roof and collect the Trophy #2.

Jump over the fence, prepare the Remote Electrical Charge and shoot at the engine #1 to raise the gate. Head inside and collect the Trophy #2.

Note the interactive question marks behind the Trophy cage. Prepare the Batarang and throw it at the first question mark from the right at the proper moment #1. If you have done it correctly (the question mark has to be lit when getting hit), the cage will open and you will be able to collect the Trophy #2.