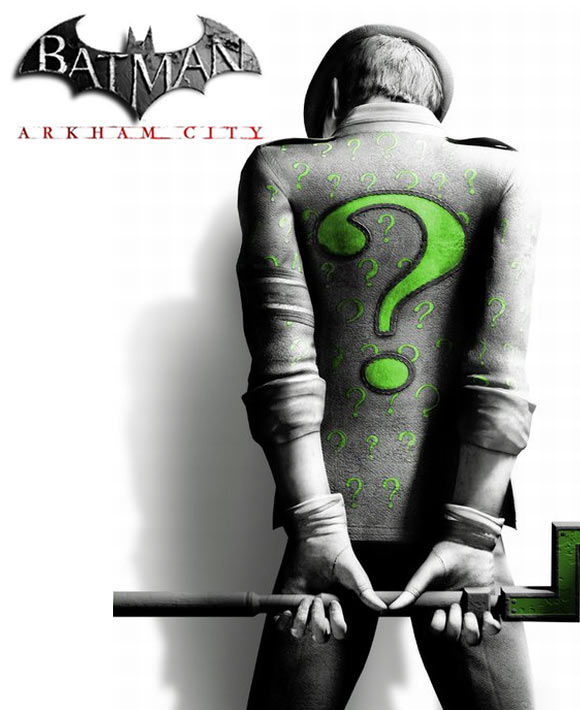 The Secrets and Challenges guide to Batman: Arkham City will take you through all the challenges prepared by the Riddler. In it, you will most of all find instructions regarding obtaining all 440 secrets, as well as completing all the special challenges included in the "Riddler's Revenge". Finding all the collectibles is made easier thanks to the multiple screens and detailed maps with their locations marked on them

How to find given secrets

If you want to find all the secrets using this guide, it would be best to follow the same order to avoid getting lost. If, on the other hand, you are looking for information regarding a particular secret, you should use the fact that the order in which they are presented is the same as in the menu of Batman's computer. 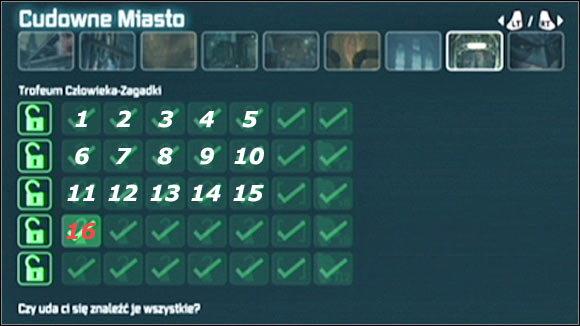 We're looking for information regarding Batman's Wonder City Trophy, specifically the first one in the fourth row. If you count all of them, you will note that it's the sixteenth Trophy in this location (screen above). Now all you need to do is find Trophy 16 in the guide. 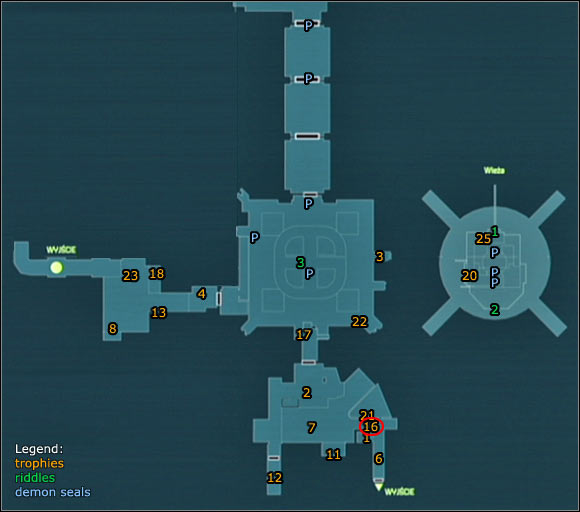 Apart from reading the description of Trophy 16, you can also look find it on the Wonder City map (screen above). Connecting both those information should be enough to locate and obtain the secret.

There is a total of 440 collectibles. 400 of them are reserved for Batman and the other 40 for Catwoman. There are five basic types of collectibles:

1) Batman's Trophies - In the further part o the guide they are marked orange. All you have to do is pick up the Trophy, though reaching it is not always that obvious. In many cases the Trophies are hidden or locked in a cage and you will have to perform some additional tasks before being able to collect it.

2) Riddles - In the further part o the guide they are marked green. Completing them requires you to scan an item (for example a flyer) or location (for example a building) which are connected with the Riddle. You can scan by holding down LB, after placing the object in the middle of the camera.

3) Breakable Objects - In the further part o the guide they are marked blue. Breaking an object is mostly done with the Batarang, though sometimes you will have to use the Remote Electrical Charge. The type of objects vary depending on the location (balloons, cameras, penguins and others). Additionally some Arkham City district also contain a special control panel that you have to find and hack.

4) Catwoman's Trophies - In the further part o the guide they are marked red. These Trophies can be located and marked as Batman, but only Catwoman can collect them. It's worth to notice that sometimes you will have to use the abilities of both characters, e.g. destroying a wall blocking access to a Catwoman's trophy with Batman.

5) Physical challenges - It's a special category which doesn't require you to find objects. Instead, you have to complete various challenges connected with fighting (for example defeating enemies in a given time) or exploring an area (for example gliding for a given period of time). 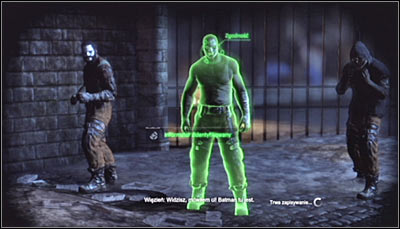 Just like in the previous game, in Arkham City you can learn the location of various collectibles. It's however done completely differently, by interrogating informants - inmates surrounded by a green aura (screen above). You should come across the first enemy of this kind after beginning Enigma Conundrum. Afterwards you will come across other informants on a regular basis. 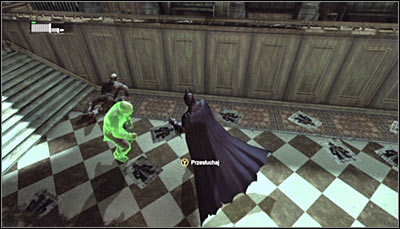 It's extremely important that you can't knock out an enemy before interrogating him. He has to be the last enemy standing (screen above) and only then you will be able to approach him and press Y to interrogate. Don't worry if you fail, as you will be able to gain information regarding a given group of secrets from a different enemy. 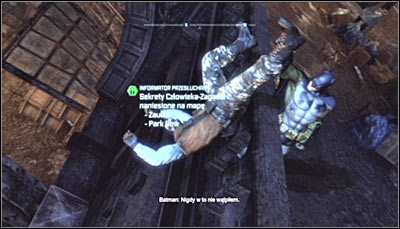 The interrogation itself is automatic and end with receiving an information on the location, together with markers informing of secrets (screen above). IT DOESN'T MEAN that all icons will appear at once, as it will only concern a small part of them. In order to learn the location of all the secrets, you will therefore have to interrogate tens of informants. It isn't absolutely necessary if you intend to use the guide, but still I wouldn't recommend completely giving up on this option. On a side note, it's worth to mention that you can also manually mark any Batman or Catwoman Trophies that you come across (hold down LB) and you should do it with those that you can't reach at the moment (for example because of the lack of some gadgets or playing as the wrong character).