You will be informed of the possibility to approach this mission by a marker pointing an unidentified victim murder site appearing on the Arkham City #1. It's an alley in the Bowery, east of the Subway Station and the Museum building #2.

Jump down to the very bottom and approach the victim's body #1. In accordance with the received hint, press LB to turn on the Evidence Scanner. Start off by aiming at the victim's head #2 and hold down A until the scanning ends. Batman will note the victim's face has been separated from the rest of the body, which is a signature of a serial killer known as the Identity Thief.

Now scan the blood stain nearby the body #1. Batman will decide to calibrate his scanner so that he can follow the killer's trail. Keep the Detective Mode turned on, turn around and head north #2. You will come across further trails every couple meters and you don't have to scan them.

Your objective is reaching the fence #1 and climbing it to the other side. Be careful, as starting from here you will be coming across groups of thugs #2. When you do, turn off the Detective Mode and fight them. At the same time try to stay nearby where you started the fight, to avoid wasting time on searching for the last blood trail.

After jumping over the fence, turn left twice and you should end up heading south. Eventually you should reach another fence, jump over it as well #1. Approach the Political Prisoner #1 and speak with him. He will state that he's not the killer and that the real one looks like Bruce Wayne. 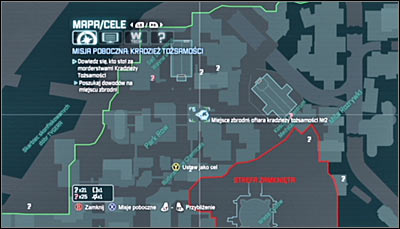 You will have to find the second victim on your own, as the game won't give you any hints on his whereabouts. Examine the alley west of the Church in Park Row (screen above). If there are enemies in the area, it would of course be good to take care of them.

Head west, jumping over a fence #1 and eventually reaching the place where the body has been dumped #2. In accordance with the suggestion, you will have to examine the body to find new evidence.

Press LB to turn on the Evidence Scanner. Start off by scanning (hold down A) the sharp tool lying by the body #1 to gain fingerprints. Afterwards scan the bandaged head #2. Listen out to new conversations to find out that the fingerprints from the murder weapon point to... Bruce Wayne. 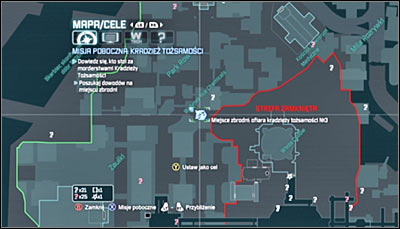 Now you can move to finding the third victim. Also in this case you will have to look around Park Row, finding the body in an alley adjoining the Ace Chemicals building (screen above).

Approach the body, turn on the Evidence Scanner and start examining it. Start off by scanning the bleach traces by the body #1 and afterwards focus on the bandaged head #2.

Keep the Detective Mode, as now you will have to follow the bleach traces. Head west #1 and turn north-west after jumping over the fence #2.

After reaching the new alley, jump over the second fence #1 and head west. The traces will soon take you north #2. Look out, as soon after jumping over one more fence you will probably bump into a group of inmates. Luckily defeating them shouldn't be hard.

After the battle return to tracking down the killer and eventually the traces will lead your north #1. Soon you will come across an inmate facing the other direction #2. Approach him and press Y to interrogate him. He will tell you that dumping the body and using the bleach was all Bruce Wayne's idea. He will also point you where you should look for the murderer.

It's high time to head out and find the Identity Thief. Open the map and you should note a new point east of the Solomon Wayne Courthouse in Park Row #1. You will need get there, using the roofs of the local buildings at best #2.

After reaching the marked spot, look for a door #1 leading inside the Identity Thief's hideout. Go forward and turn left. Stop by the tape recorder #2 and press A.

A cutscene will play during which you will listen to the journal #1 and meet doctor Thomas Elliot #2, the man who has stolen Bruce Wayne's identity. Curiously, you won't have to fight him in any way.

After the cutscene, search the room and use the Cryptographic Sequencer on the control panel #1. Solve the mini-game and create the password #2. Afterwards you will be able to go through the gate and listen to a conversation with Oracle, therefore ending the mission.